About Belgians and French fried potatoes

The Beaver left a comment a few hours ago asking how we make our French fries, pommes frites. No, we don't use olive oil. For a while I was using canola oil, huile de colza, but recently it's been sunflower oil, huile de tournesol. Both work very well and are much less expensive than olive oil. 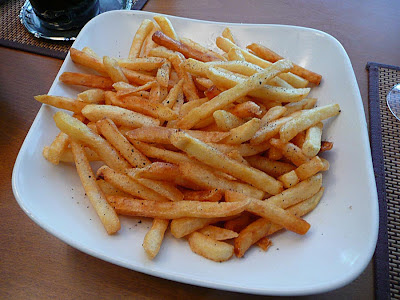 About a week ago I was listening to a radio program I have fun with, « Les Grosses Têtes » on RTL-France. It's a panel of comedians, actors, and writers with a special guest each day. They joke about everything, including French history, politics, food, culture, and current events. Sometimes it gets a little risqué. Lots of puns, including a lot of groaners. You get the drift.

That particular day, the guest of honor on the show was a Belgian comedian I hadn't heard of before. His name is François Perrette and he was doing a one-man-show in a big Paris theater at the time the radio show was recorded last winter (these are summer re-runs).

I had just started listening to the show when I heard the host, Philippe Bouvard, ask Perrette where exactly he lives in France. It seems he left Belgium years ago. Perrette's answer surprised me — he said he lived in a beautiful little village in Touraine just outside Saint-Aignan. And he actually named the village we live in, saying it was close to Chenonceaux and Cheverny, to locate it for people.

So he's a neighbor, though I obviously haven't met him. He's also Belgian, as I said, and you might know that Belgium is supposedly where the so-called French fry was invented. Fries are pretty much that national dish of Belgium, and times I've been up there they have always been very good. Belgians eat their pommes frites with mayonnaise or gravy, whereas in France people eat them with sauces, yes, but mostly with hot Dijon mustard and, more and more, with what they call "sweetened tomato sauce" on Cuisine TV. That would be ketchup.

Then the conversation came around to food and Bouvard asked his Belgian guest how he went about making pommes frites in his own kitchen. Perrette said he fries potatoes in a 50-50 blend of horse fat and vegetable oil! I was so suprised at the idea of using horse fat as a fying medium that I didn't hear what kind of vegetable oil he used. Maybe it was peanut oil, which a lot of people prefer.

Weren't the fries at McDonald's cooked in beef tallow — aka beef fat — for many years?

I've been thinking about using duck fat to make fries the next time I change the oil in the fryer, partly because I have saved so many liters of it from all the ducks I cook. Duck fat can cook at high temperatures without smoking, I believe. Maybe I should make a half-and-half blend of duck fat and sunflower oil. I might.

Perrette went on to explain that he can't really make good fries at his house in Touraine because the right potatoes aren't available here. You have to go up to northern France or, better, right to Belgium to get good frying potatoes. (You'd think he could drive up there and bring back a few kilos, but whatever.) 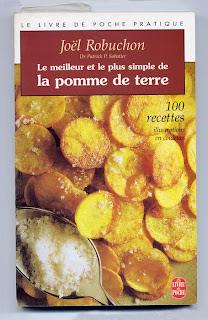 And that has been my experience with making French fries in Touraine. We've tried putting all different kinds of potatoes in our nice deep-fat fryer, including the ones labeled « Spécialies Frites » that they sell at the supermarket and at the farmers' market. I've tried the potatoes sold as the ones you use to make purée or soup (Agates), the ones that are all-purpose (Charlottes), the red ones (Franceline), and the ones that come in 10-kilo net bags labeled as just ordinary potatoes (pommes de terre de consommation).

For fries, the result is never really good. Walt and I fry the potatoes twice — a first frying at a slightly lower temperature (170ºC, which is 340ºF), a rest in the fying basket, and then a second frying at 190ºC (375ºF) — that's as hot as our fryer gets. We've even tried doing what the famous chef Joël Rebuchon recommends: first blanch the potatoes for a minute or two in simmering water, and then give them the two fryings. In my experience, that didn't make too much difference either.

The fries we make with fresh potatoes just don't come out crispy and good. I guess we are doing something wrong. But what is it? With some potato varieties, the fries come out downright limp and soggy, even when cooked as they should be. Maybe Perrette is right. Maybe we just can't get the right potatoes here. (I think the right potatoes are the BF15 and Bintje varieties sold up north.)

So we use frozen French fries to make our frites. The frozen potatoes are not any more expensive than fresh potatoes. We have a big freezer so we can buy them by the two-kilo bag (nearly 5 lbs.) and a bag costs between a euro and a euro fifty (if I remember right). You don't have to peel them. They keep for a long time. They have already been blanched — in oil, not in water. We still give them two fryings, and they seem to come out better that way than when you just put them and and cook them until they look done.

The only thing you can object to with frozen French fries is the oil the agribusiness companies use to do that blanching, or pre-cooking. As often as not, it's palm oil. It's not always hydrogenated palm oil, but sometimes it is. Sometimes it's just listed as « huile végétale » on the label, so you don't know what it is. They say palm oil is not good for us.

Our favorite brand of potatoes is the one sold at Intermarché under the name Bouton d'Or. The ones from SuperU are acceptable too. We've tried others, from the Netto or Ed hard-discount grocery stores, but they haven't been as good. We have not tried the McCain brand, which you see in all the stores, but I think they are a little too pricey. Maybe I should try them anyway.

And I will continue to experiment with different varieties of fresh potatoes from time to time. I have a theory though. I think the big agribusiness companies have a corner on the market for potatoes that make good pommes frites. It would of course serve their commercial interests to contract with big farms to have the appropriate potato varieties produced for them at bulk prices. That way their products are as good as they can be.

If we had sandy soil up here at La Renaudière, it would be good to grow our own potatoes. But our soil is too heavy in clay to make that feasible.
Posted by Ken Broadhurst at 06:44