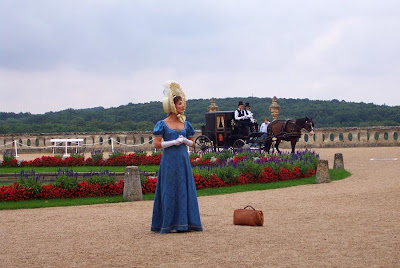 A new governess arriving at the château, if I remember correctly...
Valençay is a town about 20 miles east of Saint-Aignan. It has a château, of course. Talleyrand, Napoleon's powerful minister of foreign affairs, lived there. His chef was the equally famous Antonin Carême, and you can visit the kitchens he cooked in and the dining room where there is an emormous table for dozens of guests. 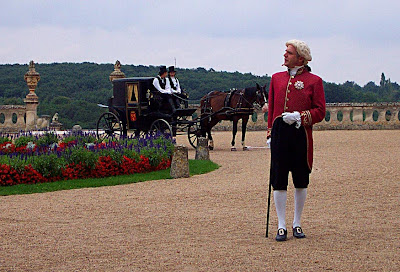 Talleyrand had a club foot so he walked with a cane.
(Or at least the actor does.)
On nice summer afternoons, a troop of actors performs scenes from the history of the château out in the courtyard. They wear microphones (and beautiful costumes, as you can see) so that visitors can hear the dialog as well as see the play. It's fun and informative. 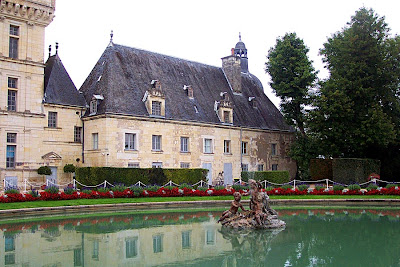 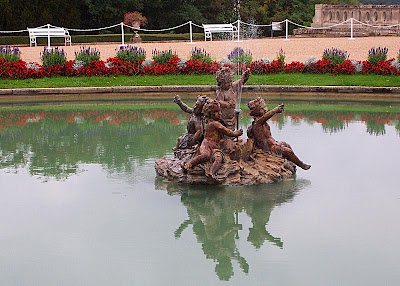 Cherubs playing in a fountain
Valençay was a Renaissance (built around 1540) château that was given a whole new wing in the 1600s and remodeled in the 1700s, so the building shows many styles. In fact, there had been a château on the site since the 1100s. The newer wing is furnished in as it was in the 1700s and 1800s. 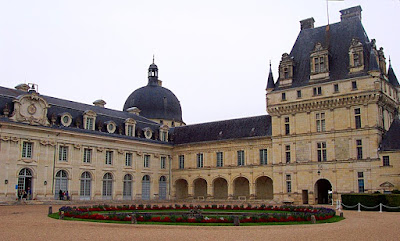 The new wing is on the left and the old one is on the right.
There is also a beautiful formal garden and a big park where kangaroos, exotic birds, and deer and kept in large pens. Valençay makes a nice place to spend a warm afternoon. 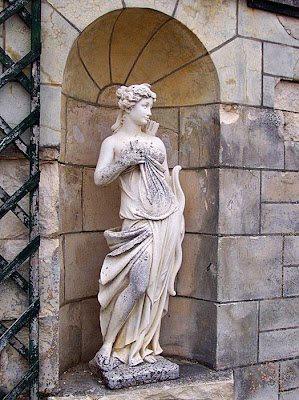 This girl spends all her afternoons — and mornings,
for that matter — in the gardens at Valençay.
Posted by Ken Broadhurst at 08:56