The most touristy village in Provence

Gordes is one of those places like Rocamadour (here are my photos) and the Mont Saint-Michel (blog topics here and here, and elsewhere on the blog). These places are so touristy that the idea of going or being there in the middle of throngs of people can turn you off. 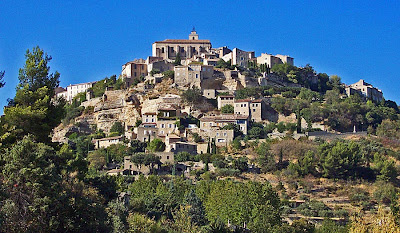 Gordes, in Provence
But there's a reason why such places get to be so touristy: they are so magnificent. It's a trade-off. You need to go at least once, if you ever have the chance. I've been to all three at least twice, and to the Mont Saint-Michel more times than that. You learn that the time to go is on a weekday in the off-season. 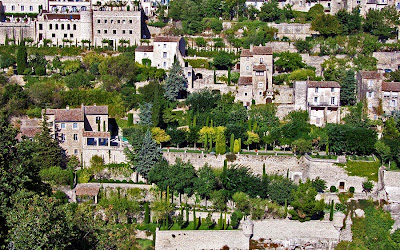 The houses in Gordes climb up a steep cliffside.
When I think back to my first stay in Provence, which was by far my longest, I'm surprised to realize that as students we didn't even go to see the hilltop villages of Provence. At least I didn't, and I don't remember my fellow students taking trips to the Luberon villages and coming back with glowing reports. And they are so close to Aix. 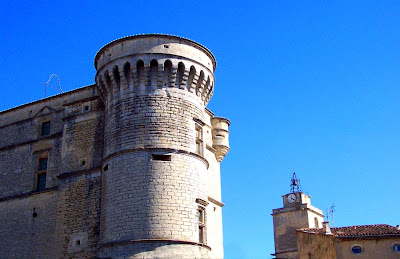 There's a Renaissance-era château
at the top of the village of Gordes.
I guess one reason we didn't to to Bonnieux, Gordes, Ménerbes, and Roussillon was that we didn't have cars. The travel we did was by train, and the train took us to Avignon, Arles, Nîmes, Marseille, and even Cannes and Nice. And Paris, of course. But the train didn't go to Lourmarin or Lauris, as far as I know. I remember taking a bus to Cassis and on to Porquerolles (which required a ferry ride). But I don't remember Apt or even Cavaillon. 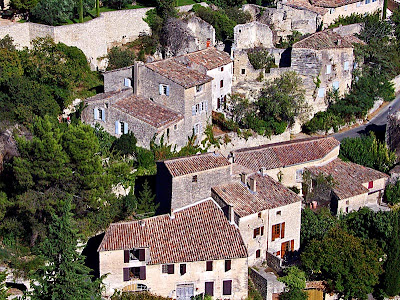 Looking down from Gordes over tile-roofed houses
When I was in my early 20s, I realized I loved France but I didn't know much about it. I spent those six months in Aix and I traveled mostly to the Provence towns I just mentioned and not much farther. I had seen Paris when we first arrived in France, spending one night there before flying on down to Marseille for our semester in Aix. The pull of Paris was irresistible to me. 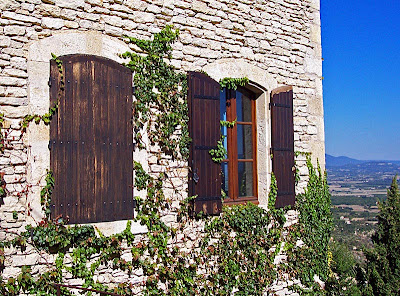 Not all the shutters in Provence are painted in bright colors...
At spring break, a lot of the students took off with their Eurail passes for trips to Switzerland, Spain, Scandinavia, or Greece. For me, having two weeks off from school was a chance to go to Paris. And that's where I went, by myself. Nobody else was interested in such a trip. I stayed for two weeks in a hotel just off the Place Maubert in the Latin Quarter, and I explored the city by metro and on foot. 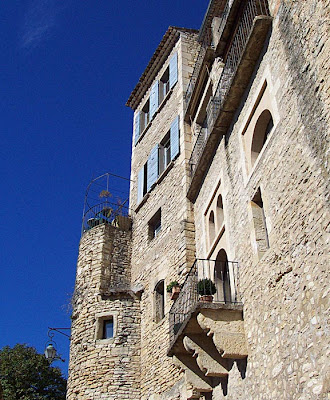 ...but here are some more blue ones (and a blue sky)
The woman who ran the hotel (it was called Le Pierwige and doesn't exist any more — the building now houses a bank at street level with, I assume, apartments upstairs) was called Madame Suzanne. She seemed pretty old to me (I bet she was in her 50s), she had unnaturally blond hair, she lived in the eastern suburbs of Paris, and she loved to talk. She was kind of loud, actually. I have memories of spending rainy mornings or cold afternoons just sitting in the lobby of the hotel talking to her, soaking up her French. 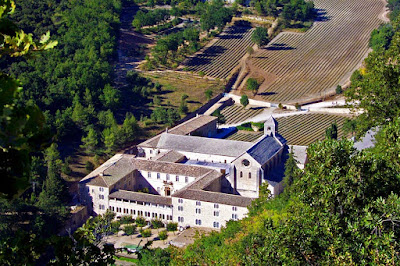 The Cistercian abbey called Sénanque is in a valley just outside
Gordes. It is surrounded by woods and by fields of lavendar.
I also met other English-speaking students who were staying in the hotel and went with them on trips out into the wilds of the city (remember I came from a small town in North Carolina and was a student at a small college there).

I remember going to Les Halles before the central market there was completely dismantled and moved to the suburbs out at Rungis, near Orly. On a gray, cold, rainy day, the experience was overwhelming. I think I was vaguely afraid and disoriented that day — such were the smells, sounds, and colors of the chaotic scene — and I couldn't wait to get back to the quiet and warmth of the hotel.

Years later, an American woman I knew who was spending a year learning French in Paris described her experience this way: Every time she came up out of the metro in an unfamiliar neighborhood, it was like being reborn. There she was, emerging into the light, with no knowledge of her surroundings, no experiences to rely on, and almost without language skills. That's how I felt in 1970, I realized. 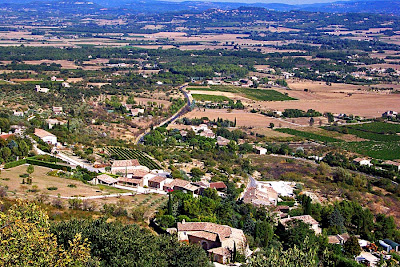 View of the landscape of Provence from Gordes
I remember going to Versailles with a young woman named Denise. It was early March 1970, and she was staying at the Pierwige too. She was from Christchurch, New Zealand. We went to spend the day in the palace and the park at Versailles, and it snowed all day. Big wet flakes stuck to our clothes and faces. It was so cold but it was exciting to be there. It seemed so real. France does to me: it seems so real. 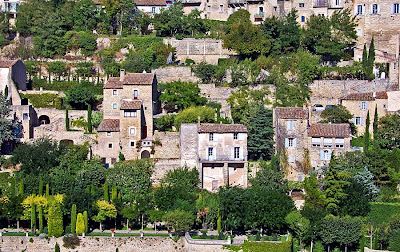 Another picture of those houses at Gordes
And that's how I think of Paris: cold, gray, and raining or snowing lightly. A cocoon of clouds. Wet shoes and a wet head. It's pretty different from Provence. Don't get me wrong — there are plenty of bright sunny days in Paris too. Just not nearly as many. The overall feeling is gray, whether you look up or look down. For color, you go into a café or a museum or a shop. 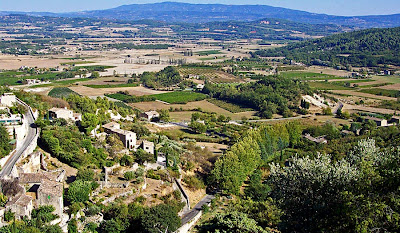 And another of the Provençal landscape
In 1970, I found a place to eat dinner in Paris. It was called the Restaurant St-Michel, on the Boul'Mich, and a four-course meal with wine cost five French francs, which was a little less than one American dollar back then. A starter course, a main dish, some cheese, and a dessert. It reminded me of a place some friends and I had found in Aix, called Chez Nénette, where we could eat similar food at similar prices. And where we did most nights before trudging back to our rented rooms.

Oops, I was supposed to be writing about Gordes and Provence. I got carried away. It must be the band of rainy weather that's moving over Saint-Aignan right now.
Posted by Ken Broadhurst at 08:15