Yesterday it rained all day in Saint-Aignan. All the weather reports said we would see rain start around noon as a front coming in off the Atlantic passed over us, and that the rain would end by about six o'clock. Ha! It was raining harder than ever at 6:00, and then at 7:00, and even at 10:30 p.m. 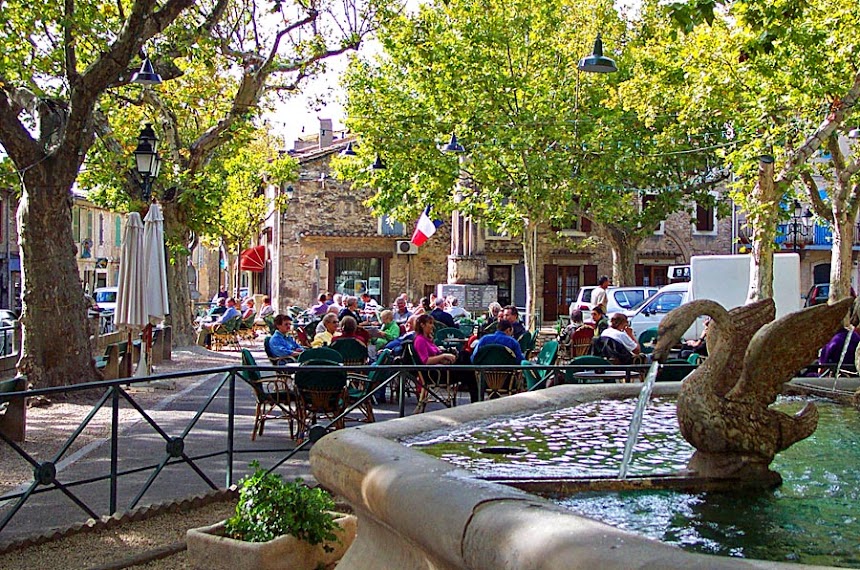 This is Maussane-les-Alpilles in September,
not Saint-Aignan in February.
In yesterday evening's rain, the local toads were having the time of their lives — they were all up and down the road that runs by the house, some of them just sitting there enjoying getting wet, and others in couples (if you know what I mean). The little pond out back is full of toads these days. It makes me wonder how these cold-blooded animals can stand to be swimming in such cold water and still have the hots for each other. 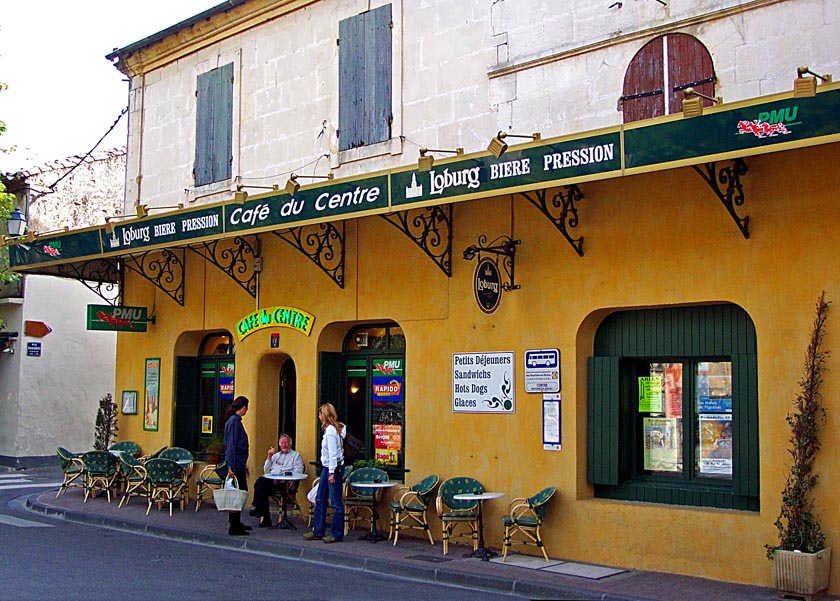 The Café du Centre has most of its outdoor seating across
the street, on the square in the shade of big old plane trees.
Meanwhile, in the afternoon I spent some time looking at these pictures I took in September 2001 in the village called Maussane-les-Alpilles in Provence. Maussane isn't in the same valley as Gordes and Roussillon. It's an hour or so southwest of there, just south of Les Baux and not far from the big town of Arles. Les Alpilles are a chain of low but rugged mountains in that area, which is known for its groves of olive trees. 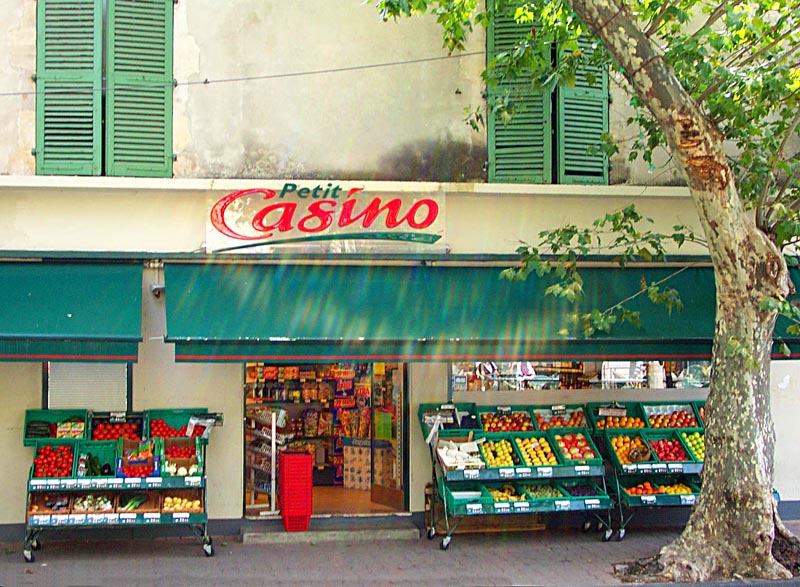 Even the little chain grocery stores look pretty
in the nice Provençal sunlight.
I wanted to go to Maussane because I had heard of an American couple who owned and operated a B&B there. Since then, I've met several people who have actually gone there to spend a few nights in the B&B. The woman who runs it is also known for having started an Internet forum for francophiles back then, and the forum is still in business. 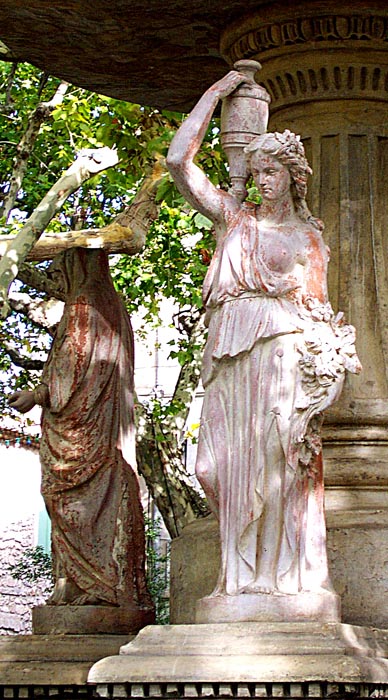 On the fountain in the main square
I can't find anything about Maussane in the Michelin green guide to Provence, but that doesn't mean that the village isn't a pleasant place to spend some time on a warm sunny day. From these pictures, you can see that quite a few people had discovered its pleasures on a mid-September afternoon. 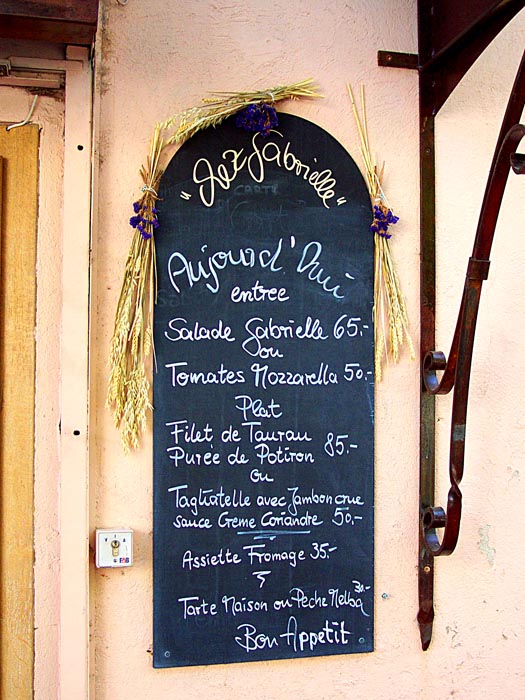 Chez Gabrielle's menu — prices in French Francs
We didn't stay in Maussane for dinner but if we had, Gabrielle's menu would have been tempting. The prices are in francs because in 2001 the euro hadn't yet been adopted as the currency of France and much of Europe. 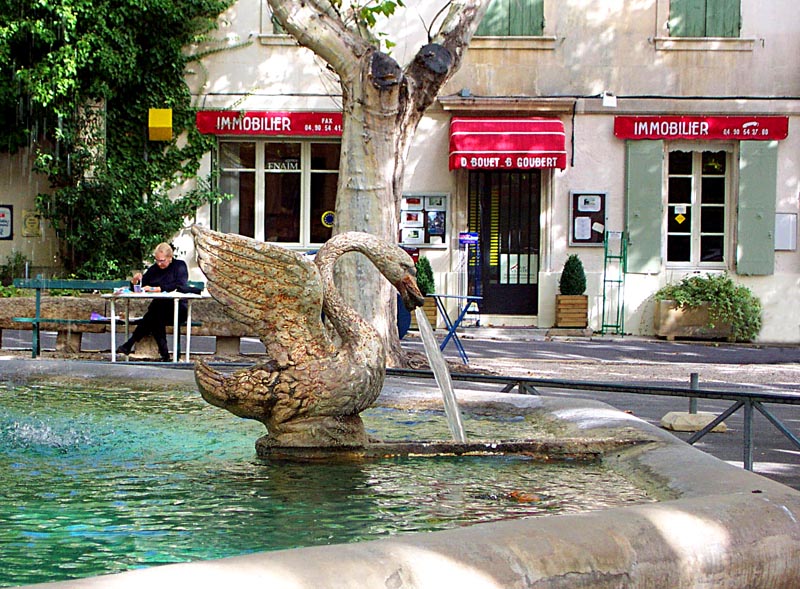 Swans decorate the fountain in Maussane-les-Alpilles
Here in Saint-Aignan, we have to go out for the morning. The rain has stopped temporarily, but a new front is moving in for the afternoon and it's supposed to rain in Saint-Aignan until at least Saturday. I'll have to make do with virtual sunshine by sitting at the computer and enjoying old photos.
Posted by Ken Broadhurst at 07:10