Montrichard in the Loire Valley

Here's a little break from the Provence scenes. Yesterday W. and I needed to go to Montrichard to deposit a check at the bank and talk to our "personal banker" about some things. Montrichard is a town about the same size as Saint-Aignan (pop. 4,000) and about 10 miles west, down the Cher River. 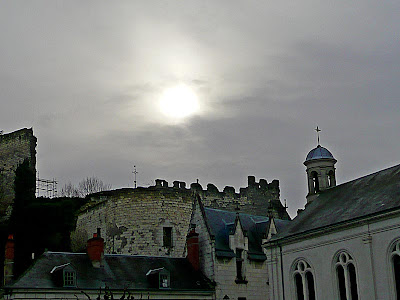 A medieval fortress, mostly in ruins, looms the narrow streets of
Montrichard. The sun was just breaking through morning clouds.
Why do we have our bank accounts there and not in Saint-Aignan? Because in 2002, when we came here to see about buying a house, the real estate agent who was receptive to our e-mail inquiries had offices in Amboise and in Montrichard. He asked us to come see him at the Montrichard office, and he proceeded to show us several houses in Saint-Aignan, where he said we would get more house for our money. 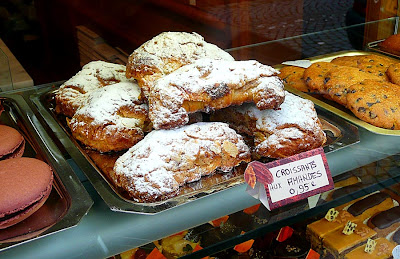 Almond croissants and other pastries displayed
in a baker's window in Montrichard
And he told us to go open a French bank account at the Crédit Agricole agency just down the street from his Montrichard office, on the town's narrow main street, called Rue Nationale. That's what we did, and we have left it that way, even though there is a perfectly good Crédit Agricole agency in Saint-Aignan, not to mention several other banks. 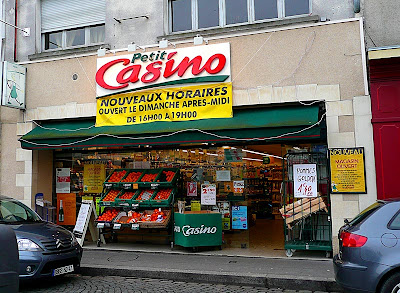 Montrichard's version of the Petit Casino grocery store.
Now it's going to be open on Sunday afternoons!
Montrichard, by the way, is pronounced with the T in the middle: it's [mon-tree-schar]. If you know French, you know that there are many place names where the final T of Mont- is not pronounced when that prefix is attached to another word. Montréal in Quebec is a good example — it's pronounced [mon-ray-al], with no T sound. « MonTrichard » is the exception. 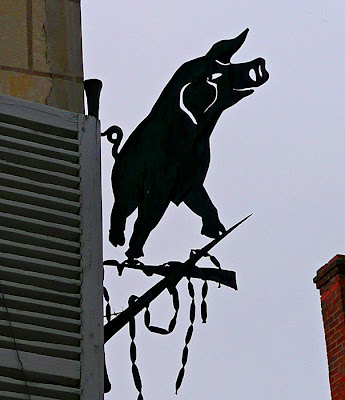 A charcuterie's sign up above the street. Notice the sausages.
We don't have occasion to go to Montrichard very often (we don't go anywhere very often by car except to the Saint-Aignan and Noyers markets and supermarkets), but it's nice to a different town and look around once in a while. There seem to be two major construction/restoration projects going on over in Montrichard, both on the Rue Nationale. Three old buildings are being renovated. 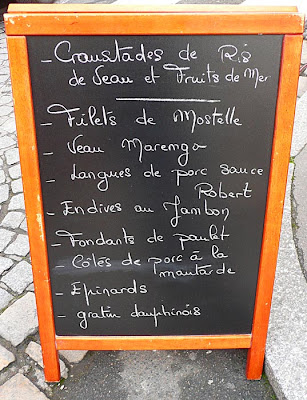 A charcuterie is a combination pork butcher's shop
and deli. This one in Montrichard sells a full range of
ready-to-reheat dishes for people in a hurry.
Montrichard has more commerce than Saint-Aignan and is more bustling. There are several charcuteries, butcher shops, and bakeries in the center of town, along with florist's shops, real estate offices, banks, clothing shops, cafés, and a very nice produce shop. More than in Saint-Aignan, I think. People tell me that 30 years ago, Saint-Aignan was the livelier of the two towns, but that changed over time, and now Montrichard is more vibrant (if I can use such a grand word). Towns that have existed for more than a thousand years go through cycles, you know. 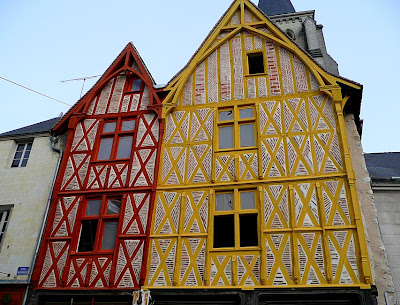 These two old houses on the Rue Nationale are being refurbished.
The same houses are pictured in the Michelin Green Guide
for the Châteaux de la Loire. I bet the new colors
are stirring controversy in Montrichard.
Montrichard also has outdoor markets twice a week (Monday afternoons and Friday mornings), while Saint-Aignan just has its Saturday morning market.

It wasn't sunny yesterday morning, but it wasn't raining. C'est déjà ça, we said to ourselves — that was better than nothing. We were early for our bank appointment, so we had time to wander the streets and admire the window displays. I personally was more attracted by the bakeries, butcher shops, and charcuteries than by the other store windows.
Posted by Ken Broadhurst at 07:24