Lauris is a village about 30 minutes by car from Roussillon. On the way there, you pass through Bonnieux, and then take a winding road through a gap in the Luberon mountains down to Lourmarin. Lourmarin and Lauris are on the south side of the mountains, on the edge of the Durance river valley. 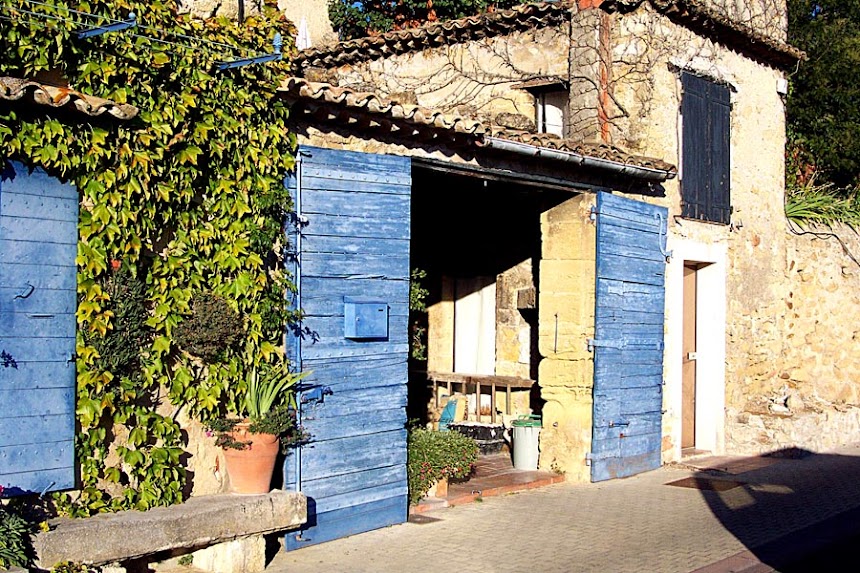 Blue shutters in Lauris
11 September 2001
The Durance used to be a wild river. And I've already talked about the hard, cold, dry north wind called the Mistral that sweeps across Provence with great violence and frequency. And then there is the capital city of the region, Aix-en-Provence, where the parliament used to meet and where I was a student in 1970. An old saying I've read is: « Mistral, parlement, and Durance, Sont les trois fléaux de Provence. » That means "Mistral, parliament, and Durance, Are the three scourges of Provence." 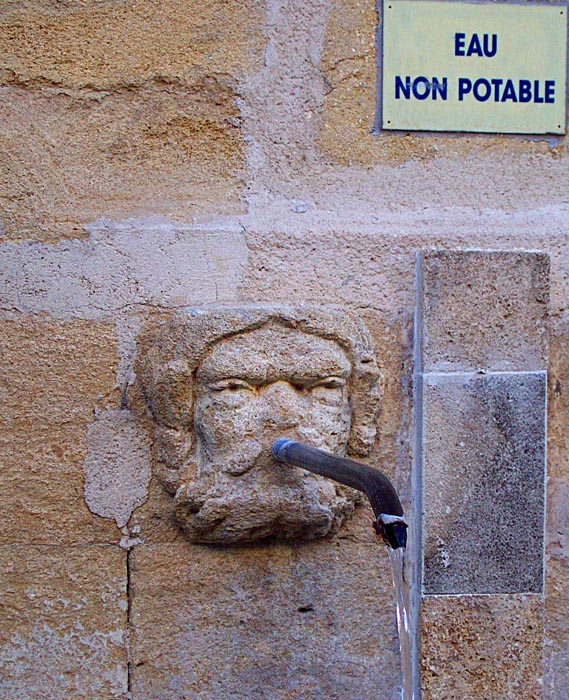 Don't drink the water! At least not at this fountain.
One theory though, is that the Mistral wind is what gives the area its beautiful deep blue skies. It's hard on the local vegetation, however, because it dries out plants really quickly. I'm not sure if the Durance river has any particular beneficial aspects for Provence. But at least it doesn't really flood anymore, now that dams have been built upriver to control its flow. And as for the parliament, well... it's not only in the U.S. where people complain about their government. 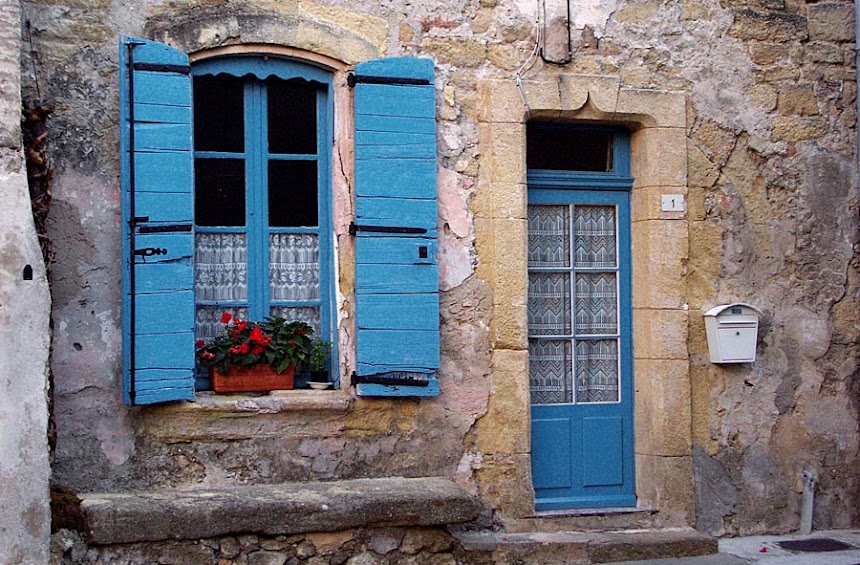 More blue shutters in Lauris, and a blue door
11 September 2001
On the subject of the Mistral, in 1993, Walt and I went and found a winery whose red wines we had been buying and enjoying in California. That's the winery where the people advised us to buy an inexpensive five-liter plastic jug and have it filled from the wine vat rather than buy wine in bottles. It was less expensive, and it was fun, so that's what we did. 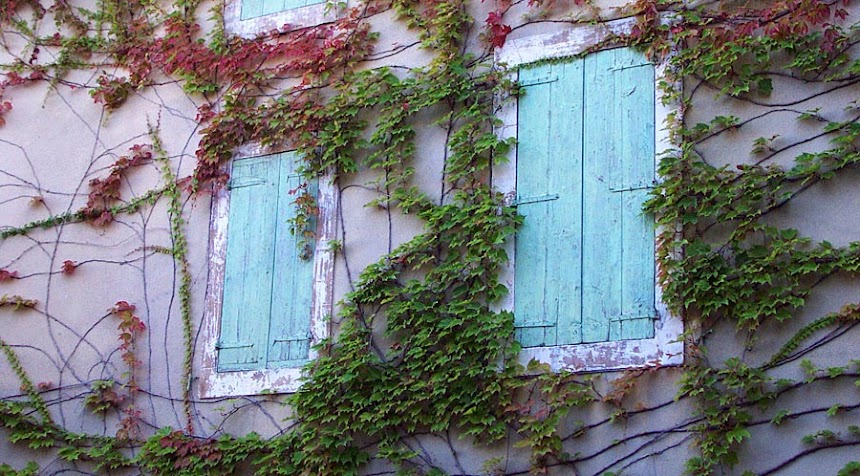 Turquoise shutters in Lauris
11 September 2001
That winery (Walt will remember the name) was known for its organic methods of growing grapes and making wine. The people who ran it explained that the Mistral wind blew so hard and so regularly that they didn't need to use fungicides or insecticides on the vines. The dry wind made it impossible for mold or mildew to take hold, and the Mistral blew so hard that it blew all the insects away before they could do any damage! Blew them right off the vines. I think they were kidding.

Anyway, Lauris is an unremarkable village, I think, by Provence standards. In fact, none of the villages in the Luberon and along the Durance valley have any particularly distinguished or historic châteaux or churches in them. (I'll quickly add that the architecturally amazing Cistercian abbeys of Sénanque and Silvacane are located very close to the villages of Gordes and Lauris, respectively, but not in them.) 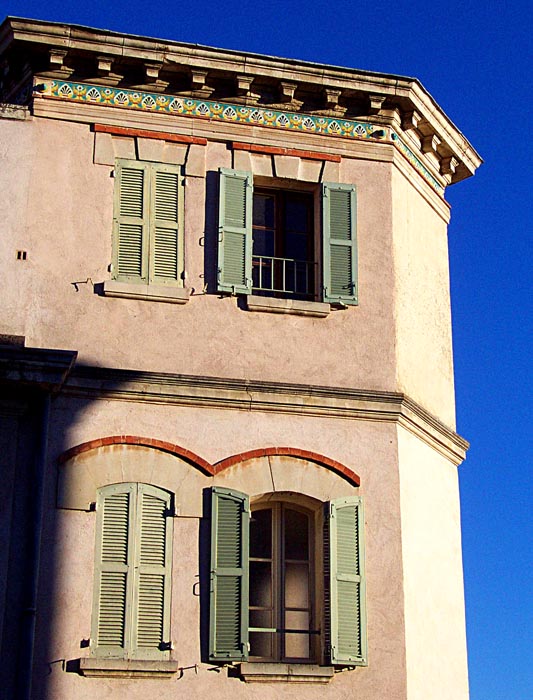 Green shutters in Lauris
11 September 2001
What there is to do and see in Provence is the villages themselves. The narrow, winding streets paved with cobblestones, the old houses with their brightly painted shutters and windows, and the views from hilltops of fields of lavendar and vineyards and other hilltop villages, with a backdrop of mountains, are the draw. It's a magical atmosphere. 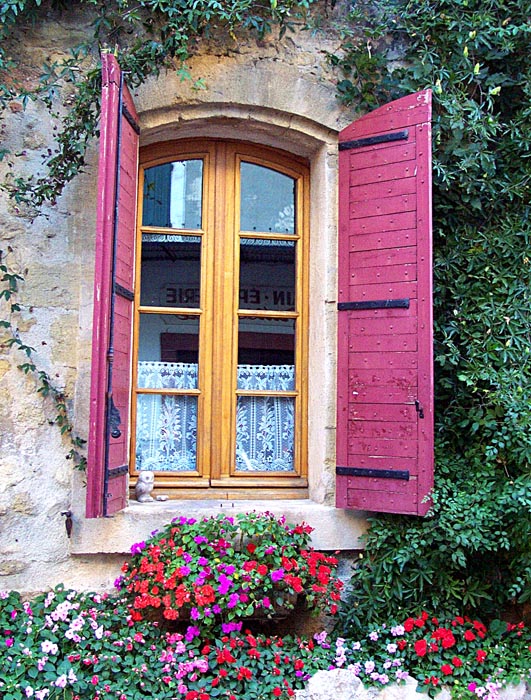 Red shutters in Lauris
11 September 2001
We had been to Lauris in 1993, when we rented a house just up the road in Mérindol, also on the edge of the Durance valley. The village of Puget, which gave its name to one of the major brands of French olive oil (and maybe to the Sound of the same name in the U.S. Pacific Northwest), is nearby. In 1993 in Lauris, W. took pictures — color slides — of red and blue shutters there. In 2001, we went back and took pictures — digital — of the same shutters again.
Posted by Ken Broadhurst at 07:43