Singing in the trees

Several times over the past week or two, the song of one particular bird in our yard has almost drowned out all the other birds' songs. I'm not complaining; it's nice, melodious singing. I just heard it a minute ago, and I went outside to see if I could spot the bird. And I did — it likes to sit and sing in the very top of our tallest tree, which is a fir tree of some kind. Walt had seen it up there last week, after noticing a lot of loud chirping and warbling.

This morning I came back in and got my camera, hoping to take a picture of the song bird in question, even though the sun hadn't risen yet and I didn't have any great hopes that there was enough light for a telephoto picture to turn out. By the time I went back out on the terrace, camera at the ready, the bird had flown away. 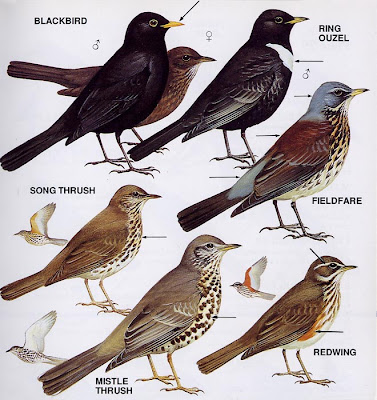 Thrushes in a Peterson's Guide illustration.
The American robin is a thrush, for example.
Walt did get a look at said bird last week, and he looked it up in our books. He thinks it's a thrush — maybe a mistle thrush (Turdus viscivorus), which is a large bird that, according to The Peterson Field Guide to Birds of Britain and Europe, "sings in all weathers, from tree-tops."

The mistle thrush is so named because it likes to eat mistletoe berries, and we have a few big clumps of mistletoe in the apple trees in the back yard. Our French bird book, Les Oiseaux de France by Jean-Claude Chantelat, says you frequently see a mistle thrush or grive draine « perchée à la pointe d'un arbre lançant son chant assez semblable à celui du merle noir » — perched in the very top of a tree singing its song, which resembles a blackbird's song. 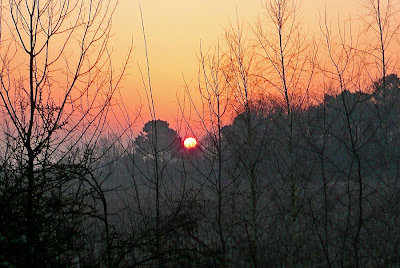 Winter sunrise through the trees at La Renaudière
13 February 2008
Or our friendly song bird might instead be the smaller song thrush or grive musicienne (Turdus philomelus), which Peterson says has a "loud and musical" song, which Chantelat calls « sonore et mélodieux. » All the thrushes also eat insects, larvae, and worms, so we are glad to have them around the yard and garden for that as well as the nice singing.

Whichever bird it is, I hope it stays around for a while.
Posted by Ken Broadhurst at 07:53