Singing on the radio

Speaking of singing (as I was yesterday), day before yesterday I had to go out in the car. That happens once or twice a week, most of the time for a trip to the market or supermarket. I turned on the radio to listen to French public radio, which is called France Inter. Normally it's a "talk station," but that morning when I listened in all I heard was two or three songs in a row. I pushed some buttons on the car radio to see if I was on the right station. 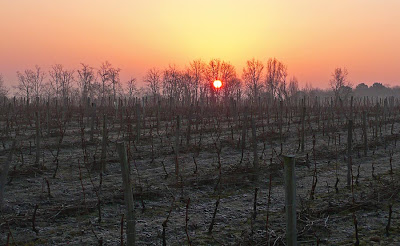 Sunrise over frosty vineyards near Saint-Aignan
13 February 2008
I was. After the third or fourth song, I heard a little announcement that the programmes on France Inter were perturbés because of a strike action by the staff at French public radio and television. The employees are worried about the future of public broadcasting in France because President Sarkozy announced recently that he wanted to eliminate all paid advertising on government-run stations.

Public radio and TV in France depend on paid advertising for about 30% of their budget. In Germany, advertising accounts for only 10% of budgets, and in Great Britain the BBC and other public media outlets don't take paid advertising at all, evidently.

In France everybody who owns a TV set or radio has to pay a special tax called la redevance that goes to financing public broadcasting. You can have as many TV or radio sets as you want in your house, and that doesn't change the amount of tax you pay, which is approximately 120.00 euros a year. That's what Walt and I pay — it comes to 10 euros a month. 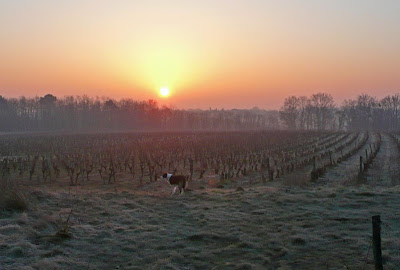 Vineyard sunrise with dog
13 February 2008
When you buy a TV, the merchant you purchase it from sends in a form to the government. If you are not already in their database, the tax people send you a statement. In our case, when Walt bought a TV set, he got the notice. But since I had already bought a set a few months earlier, we just sent the form back and said we lived in the same household. That took care of the duplicate billing.

Evidently, the equivalent tax in Great Britain is a lot higher. That's how they can do without commercial advertising on their public airwaves. So will the tax have to be raised in France when advertising stops?

Why President Sarkozy announced his desire to eliminate advertising as a source of revenue on public TV is anybody's guess. There's no evidence that his government has a plan to increase public financing and cover the budget shortfall that pulling advertising would create. Sarkozy's announcement caught everybody off-guard; there hadn't been any talk of such a move in recent years. 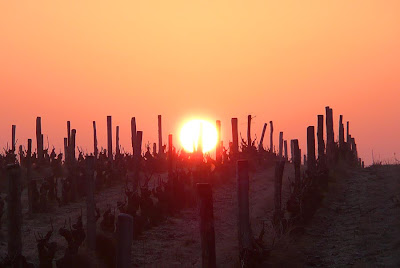 The sun peeking up over vineyard stakes
13 February 2008
We get our money's worth for the 10€/month we pay. Public broadcasting occupies a much more important part of the TV offerings available in France than PBS does in the United States. There are two general-interest private stations in France (TF1 and M6) and there are many more public stations (France 2, France 3, France 4, France 5, Arte, FranceO, etc.). On radio, in addition to general-interest France Inter, there are also France Musique, France Culture, France Info, and the Radio Bleue regional stations. So financing is a big issue.

Because advertising is limited on public stations, we watch shows, whether entertainment, documentaries, or news, as well as movies, without breaks for commercials. That's the good side of French TV. Commercials on public TV are confined to times between shows, where they don't interrupt anything and you can ignore them more easily. There are no commercials on public radio. 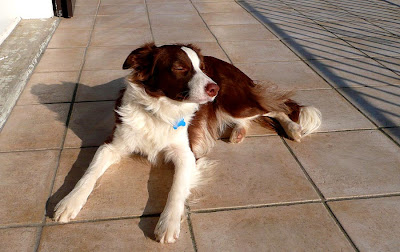 Here's Callie really getting into France Musique radio.
Night before last, on a trimmed-down version of the nightly news on France 2 TV that was devoted to explaining all this, one of Sarkozy's ministers was interviewed. She — Minister of Culture Christine Albanel — seemed unprepared to answer questions about the government's plans. She and other government figures just keep repeating that they will find a way to finance public broadcasting without resorting to paid commercials. It's not very convincing.

Since TV and radio employees don't know why or how such a plan might be implemented, they of course fear the worst. Does public broadcasting have a future in France? Are Sarkozy's motives political? Why did he choose this moment to announce such a big change? Did he consult the people who run public broadcasting, or anybody else? Does he really have a plan? I guess time will tell.
Posted by Ken Broadhurst at 09:16