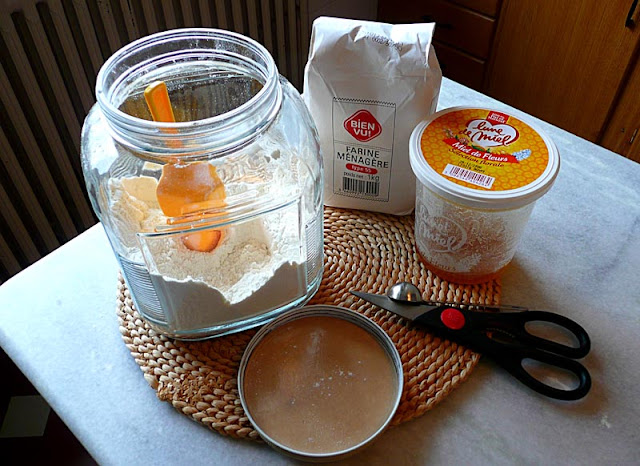 A few days ago I was watching Cuisine TV (like most days) and a French bread-maker and baker showed how to make an Alsace-Lorraine specialty, the bretzel. That's what we'd call a pretzel in America, but it's the big soft pretzel as opposed to the small crispy ones you buy in bags at the grocery store. I think soft pretzels are common street food in New York and Philadelphia. 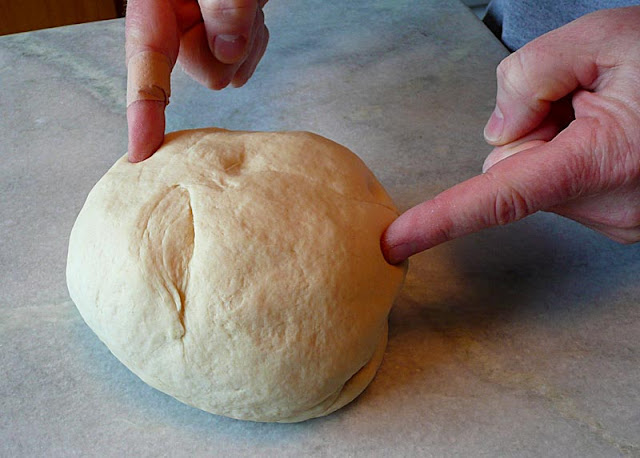 This is the dough. Nice and soft but not sticky.

Soft pretzels are also common fare in eastern France — the Alsace and the Lorraine provinces — evidently. As the bread-maker, whose name is Gontran Cherrier, showed how he made them, I remarked to Walt that that was how I understood bagels are made too. You make a dough, let it rise, shape it as you want, and then drop the pieces of dough into boiling water for a few minutes for a first cooking. Then you put the pretzel or bagel into the oven to brown for a few minutes. 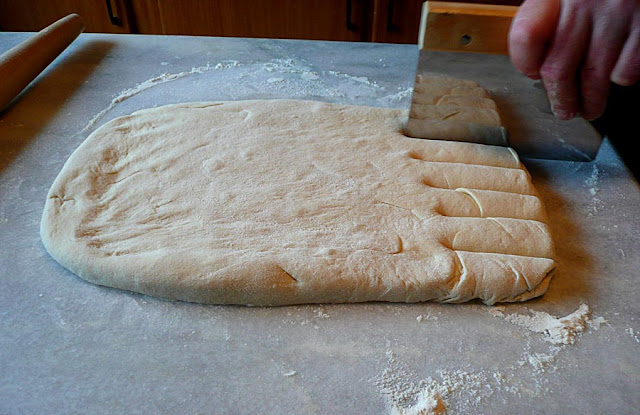 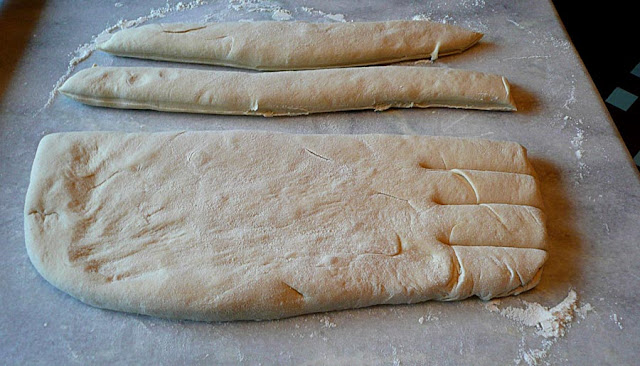 This looks like about a "foot" of dough, doesn't it? 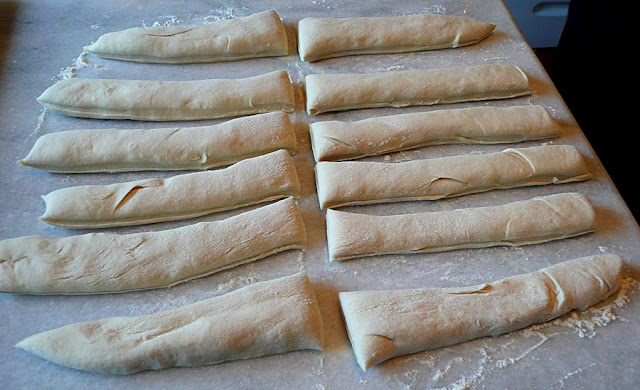 Here are the 12 bagels, before they get rolled up.

Thinking about bagels sent me to the Internet to look up recipes. We live in France, but that doesn't mean we don't still crave certain foods we enjoyed in the U.S., among them cornbread, fried chicken, baked beans, thousand island dressing with iceberg lettuce, meatloaf, and of course bagels. We make all those other foods ourselves here in Saint-Aignan, at home, from time to time. So why not bagels? 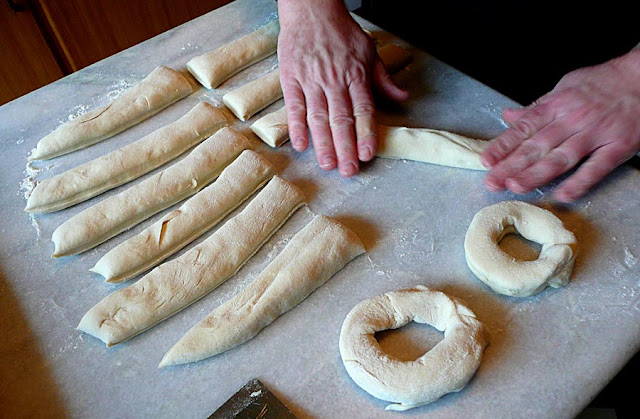 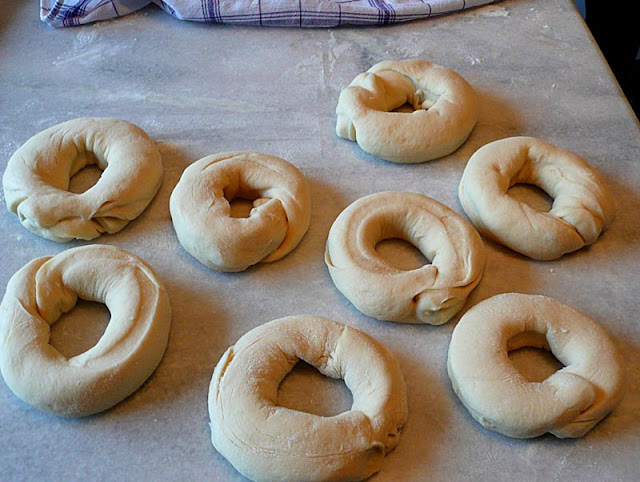 These raw bagels have risen a little
under a warm towel on the work surface.

The ingredients are pretty simple: flour, water, yeast, salt, and honey or sugar. The process isn't too complicated, but as with all yeast breads you have to give the dough time to rise a couple of times. You also have to simmer the bagels in boiling water and then put them out on a rack to dry before you bake them for a few minutes in the oven to brown them. 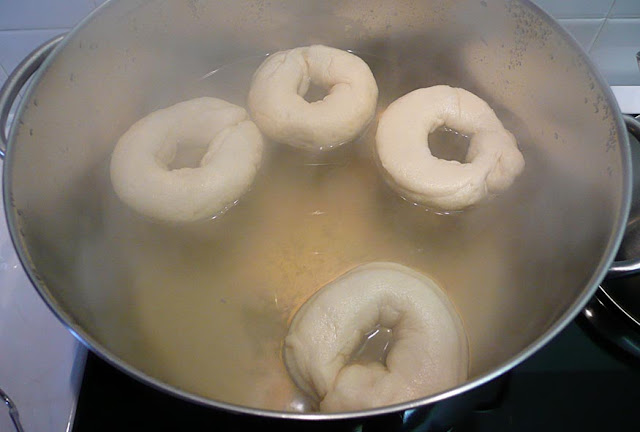 These are simmering in a good quantity
of hot water with honey added.

Now I know that the almond croissants I saw and photographed in a bakery window in Montrichard a couple of days ago set your mouth to watering, but a good bagel can do the same thing when you haven't had one in a long time. We can get cream cheese (called fromage à tartiner, or "cheese for spreading") at the supermarket. "If we just had cream cheese, we could have bagels and cream cheese... if we just have bagels." Now we do. 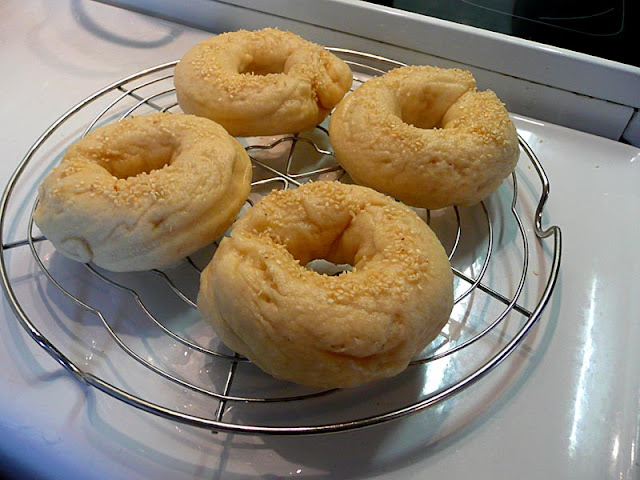 After simmering, the bagels dry for a few minutes on a rack.

But we can also get fresh goat cheese from the farm a couple of miles up in the vineyards, and it is spreadable too. Monsieur and Madame Bouland, who run the ferme-auberge, the farm-inn, called La Lionnière in Mareuil-sur-Cher, make the best goat cheese around. Their goats are free-range animals, which I've read is not often the case with the goats that produce milk for cheese in the Cher River valley. Just ask CHM — the last time he was here we looked far and wide for herds of goats, without much success. 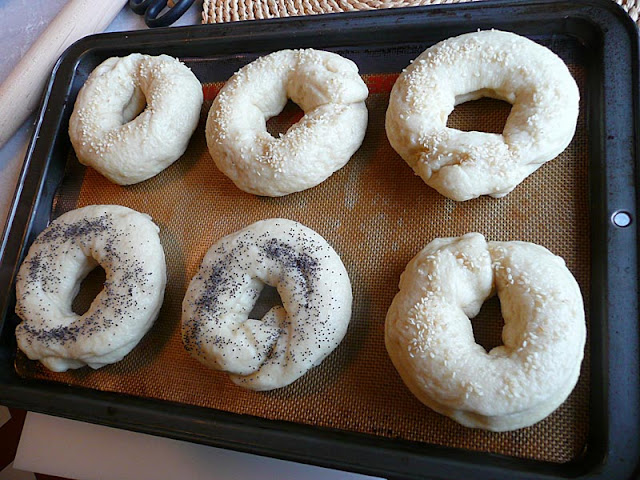 Now they are ready to go into the oven to brown.
Some have sesame seeds sprinkled on, and some poppy seeds.

Be that as it may, a good toasted bagel spread with soft, fresh goat cheese is a real treat. And now we can have one, because we can make our own bagels. The secret is in the boiling, I think. The dough rises slightly but the bagel remains fairly heavy. And tender. And chewy. 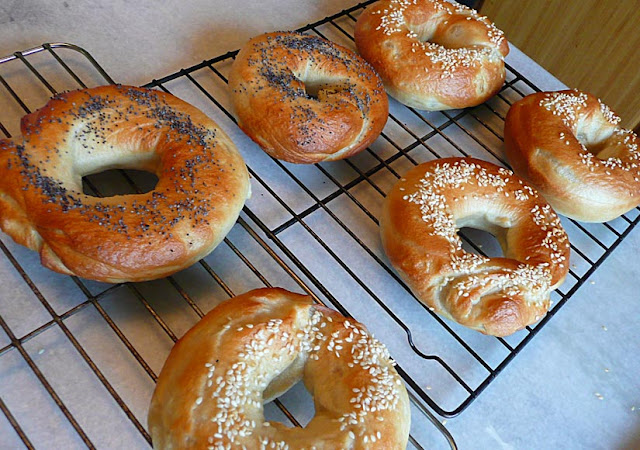 Warm, golden sesame-seed and poppy-seed bagels.
Can you believe it?

None of the cooking takes very long. First, you do a seven-minute simmer in water to which you have added a little honey or sugar — that, evidently, is what gives the bagels their nice smooth crust. After 10 minutes or so of drying on a rack, into the oven they go for 10 or 15 minutes to turn golden brown. 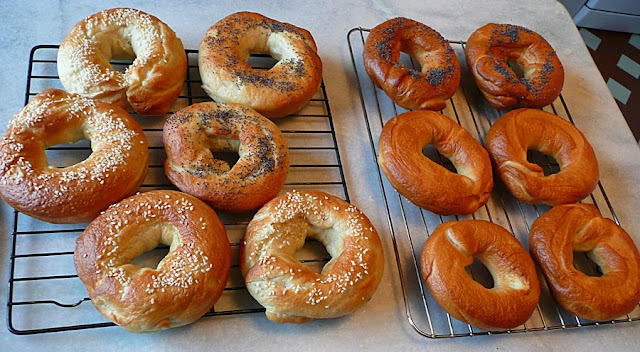 It's funny, the first 6 came out more puffed up
than the second 6, but we don't know why.

Of course, a third cooking is usually desirable, and that's a light toasting in a grille-pain or in the oven. Bagels are better if they are at least warmed through before you eat them. Yesterday Walt got some smoked salmon from Intermarché, so we are having our version of lox and bagels for lunch today. 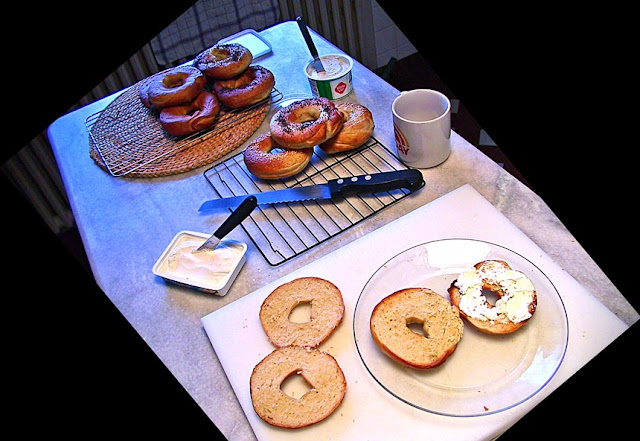 And here they are, ready for the eating.

If you are in America, you of course have no real need to make your own bagels. But if the only bagels you can get are the ones from the supermarket, I'll tell you: these are better. Of course, you might need for Walt to come and make them for you. I'll come along and take pictures and then eat a bagel with you. Do you want me to bring the goat cheese?
Posted by Ken Broadhurst at 08:20