I'll come back to Amiens cathedral soon, but first I want to acknowledge something all of us with vegetable gardens already know — it's zucchini season! We're getting three or four zucchinis from our garden every day at this point. Yesterday, Walt grated several zukes, packed the grated pulp in plastic bags, and put them in the freezer. They'll be good sometime not too far in the future for making zucchini bread or soup or fritters. Meanwhile, two recipes and six photos:
Ratatouille 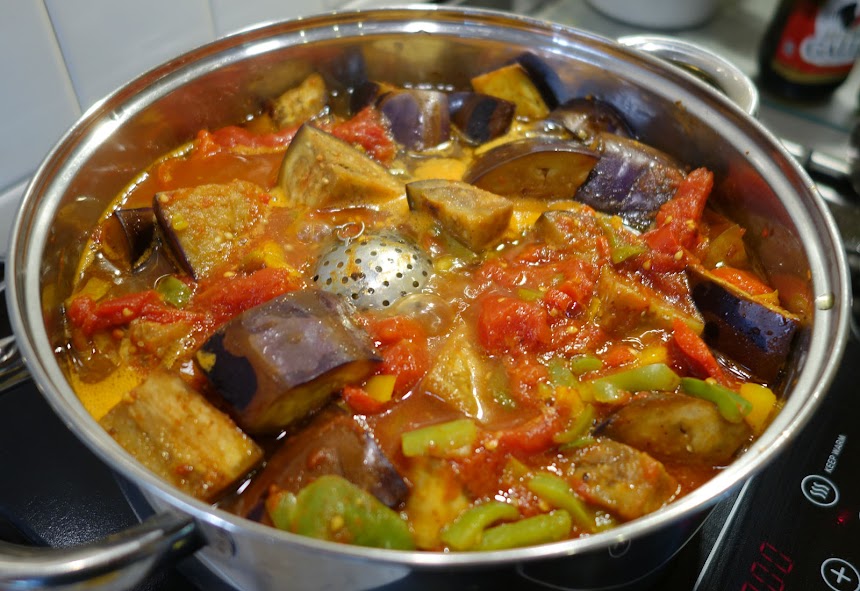 A 2020 ratatouille: onions, garlic, tomatoes, zucchini, eggplant, bell peppers, and thyme
Here's a link to a ratatouille post of mine from 12 years ago. And here's a post with a recipe in it. Ratatouille is featured on this blog every summer. You can also make baked ratatouille, like this one I made in 2004. 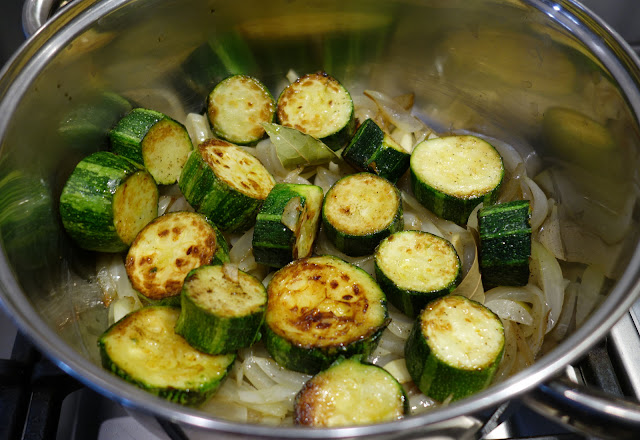 One thing you can do to make a better ratatouille is to sauté the onions, peppers, zucchini, and eggplant in olive oil, separately, before you put them in the pot to cook with the tomatoes and tomato juice. It's better made with ripe garden tomatoes, of course, but if all you have is canned whole tomatoes with juice, that works too. That's what I did last week, since we don't have any garden tomatoes yet. 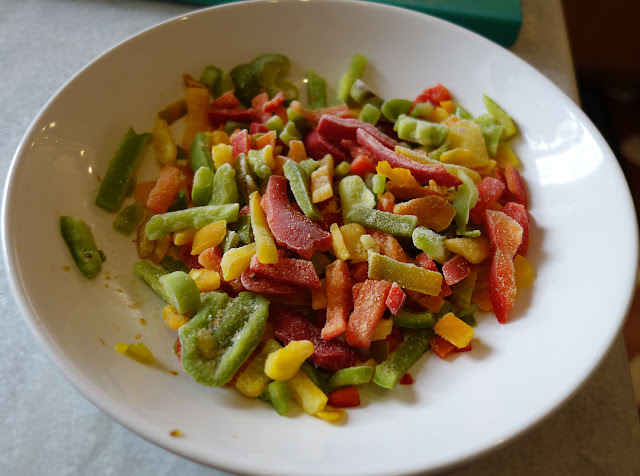 Bell peppers — red and green and yellow — give a special flavor to ratatouille. We also don't have any of those from the garden yet, but here in France, at least, I can buy them at the supermarket, frozen. They are cut into strips and frozen separately, not in a big block, so you can take out as many as you want to add to whatever you are cooking. Raw peppers freeze well and taste as fresh as can be. The ingredients listed on the bag of frozen peppers are poivrons rouges, verts, et jaunes en quantité variable. That's it. 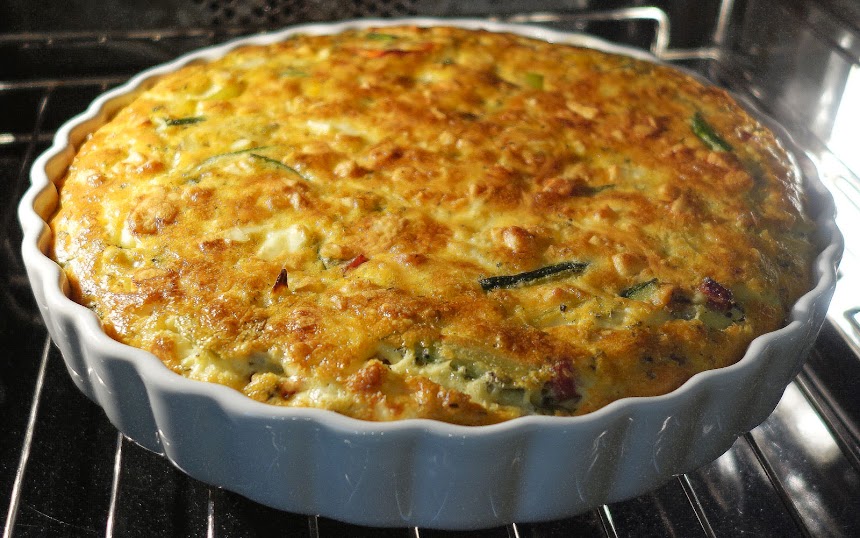 A couple of weeks ago, Sheila, a long-time reader of and commenter on this blog, told me about a recipe for a savory custard pie — in French, un clafoutis — made with zucchini, peppers, cheese, and milk or cream. It was a recipe published in the Washington Post newspaper. I'll post it below. It's not exactly the recipe I made, because I already had a French recipe for this kind of clafoutis in my collection, but the differences are minor. 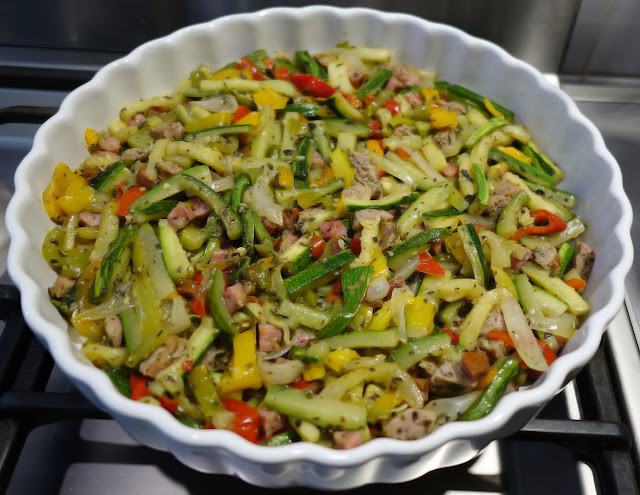 I put some diced up sausage to my version of this clafoutis just because I had some leftover from another meal. Otherwise, it's a lot of vegetables — sliced onions, zucchini cut into matchsticks, and some of those frozen bell peppers I showed above. The vegetables are lightly sauteed first, in butter. 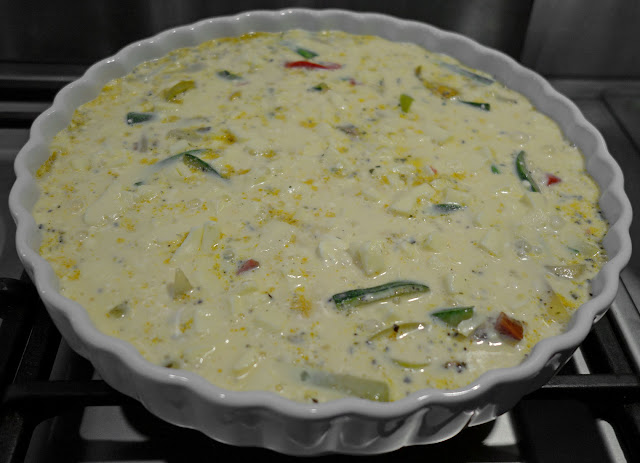 Then you put the sautéed vegetables and optional meat (cooked sausage, cooked chicken or turkey, cooked bacon....) in the bottom of a baking dish and you pour the egg and milk custard mixture over all. Bake the clafoutis in the oven until browned. Test it with a skewer to see if it's done all the way through. The clafoutis will puff up nicely, as you can see above, but it will fall as it cools. And that's okay. It'll still be delicious, eaten hot, warm, or chilled.


Zucchini and Bell Pepper Clafoutis
¾ cup whole milk
½ cup crème fraîche
4 large eggs
¼ cup chopped fresh basil leaves
2½ Tbsp. flour
¾ tsp. fine sea salt, divided, plus more to taste
½ tsp. freshly ground black pepper
1 cup coarsely grated sharp white cheddar cheese, divided
2 oz. sliced ham, chopped
2 Tbsp. extra-virgin olive oil
2 sweet bell peppers, sliced into ¼-inch wide strips
1 small zucchini (7 ounces), sliced into ¼-inch strips
2 garlic cloves, thinly sliced
¼ cup grated Parmesan cheese
Position a baking rack in the middle of the oven and preheat to 375 degrees.
In a large bowl, whisk together the milk, crème fraîche, eggs, basil, flour, ½ tsp.
of the salt and the pepper. Stir in ¾ cup of the cheddar, along with the ham.
In a 9-inch ovenproof skillet over high heat, heat the oil until shimmering. Add
the peppers and cook, stirring occasionally, until softened, about 5 minutes. Add
the zucchini and cook, stirring occasionally, until softened and the vegetables
acquire golden edges, about 5 minutes. Stir in the garlic and the remaining 1/4
tsp. salt and cook until fragrant, about 1 minute.
Transfer the vegetables into a baking dish. Pour in the egg mixture and top it
with the remaining cheddar and the Parmesan. Bake for about 25 minutes.
Serve hot or cold.
Posted by Ken Broadhurst at 06:20