About four months ago, at the very beginning of the Grand Confinement  — the lockdown — in France, I had an accident. I was out walking in the vineyard with Tasha. She walks without a leash, and sometimes she stops to sniff something and falls behind. On the walk in question, I lost sight of her. I called her, to no avail. I kept walking slowly but then I turned my head to see if I could see her behind me. That was a mistake. I tripped on something and down I went, face first. 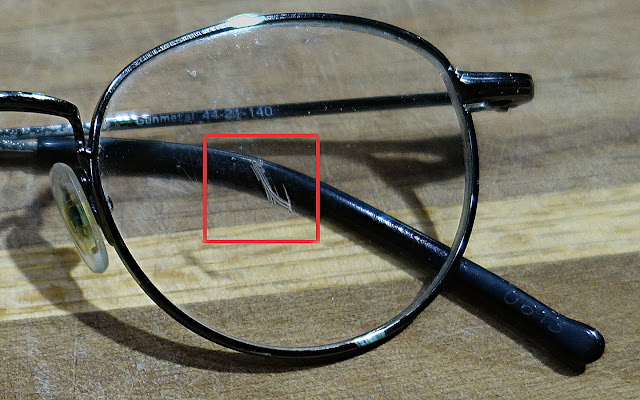 Luckily, I wasn't injured at all. However, my glasses were. My face actually hit the ground, and my glasses scraped across a stray rock that was just lying there. If I hadn't had glasses on, I might have seriously injured my eye. As it was, I badly damaged my glasses. The rock made a deep scratch in the plastic lens. You can see it in the photo above. And here's a close-up.

It's always good to have a spare pair of glasses, and I did have one. Highlight "did" — the ones with the scratched lens were made basically unusable. Here are the spares, and I've been wearing them all the time for four months now. When France was locked down and we were confinés, all the optical shops were closed (as far as I know). I really didn't know what to do.


France and a lot of other countries don't recognize optometry as a legitimate healthcare specialty. In the U.S., when you need to have your eyes examined, you go to see an optometrist. It's the same in England and the rest of the U.K, as far as I know. We have an English friend who is a retired optometrist. In France, when you need your vision tested, you have to go see an ophthalmologist. And guess what? The waiting time for getting an appointment with an opthalmo [uhf-tahl-MOH] is six or even nine months in much of the country. There's severe shortage of them in France.


Finally, a week or so ago, I went to an optical shop to find out what my options were. I was motivated to do something about the spare pair of glasses when, a few days earlier, I had put on my mask to go into our village bakery to buy some bread. When I walked out of the shop and back toward my car, I pulled the mask off because my glasses were fogging up. When I pulled the mask off, it caught on my glasses and they flew off my face, langing landed on the rough pavement of the parking lot. I nearly panicked, thinking I had damaged my only usable pair of glasses. Luckily again, I hadn't.


The big problem is that I've never been examined by an ophthalmo in France. Since my sister in North Carolina is (or was — she's retired now) a professional optician and was employed by an eye care center in our home town, I had my vision tested there by the on-staff optometrist and my sister made my glasses for me on my annual visits to see her, our mother, and other family and friends. I don't have any prescription for corrective lenses that is newer than 2009. Even if I had a newer American prescription, I'm not sure it would be valid in France. I can't even go to N.C. to get new one right now, because of the crise sanitaire.


The first optician I talked to said she couldn't do anything for me until I got a prescription from a French ophthalmo. She said the lead time to get a rendez-vous might not be as long as I'd heard, but that I'd probably have to go to Tours or even Orléans to find one who could see me sooner. Blois was a possibility. It's more complicated than that, because insurance is involved, but I won't go into all the details.


So last Wednesday I went to see another optician, this one just across the river in Noyers-sur-Cher, three miles from our house by car. She was very helpful. She said that if I wanted to be reimbursed a portion of the cost of one or maybe two new lenses, according to whether my vision has changed since my last exam, I had two options. I could try to schedule an appointment with an ophthalmo, but that would probably take many months. Or I could go see my médecin traitant — my primary care physician — and he could write me a prescription for replacement lenses. I had never known that was an option. The optician told me that she could do the eye exam and order the appropriate lenses for me, cut them, and put them into a frame. 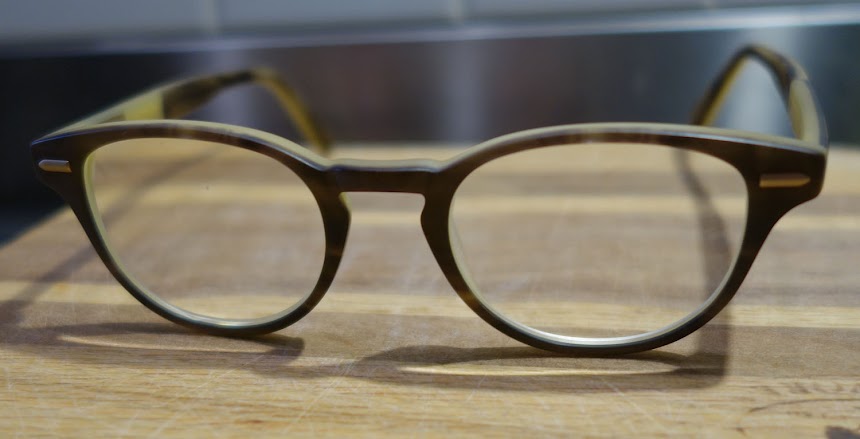 I'm trying to decide whether to have the new lens or lenses put into my old black metal frame, above, or this frame
which has old lenses in it that I've "outgrown." I'm open to opinions and suggestions...


Then the optician asked me at what percentage of the cost my top-up, supplementary health insurance policy would cover. I told her I didn't have such coverage — I just have the basic French health insurance through the Sécurité Sociale system. My health has been good enough all these years for me not to feel the need for the supplementary insurance, which is called une mutuelle in France. It seems the basic SS insurance, while it covers dental fees, dermatology, and preventive care like cardiology exams and colonoscopies, doesn't include vision care.


I thanked her and said I'd make an appointment with my généraliste, as the doctor is called, and then I'd come back to see her with his prescription. Well, she said, if you don't have a mutuelle, then you don't even need a prescription. She said she could go ahead and do the eye exam and get me new lenses if I planned to pay the full price. So that's what I'm doing. I have an appointment this coming Wednesday for the exam. I have no idea what it will cost, but at this point it really doesn't matter.
Posted by Ken Broadhurst at 07:15