I've posted about these sandwich buns before, I know, but they are so good I want to show them off again. They really are better than buns you buy at the supermarket. And when you eat them, you know you are also eating some vegetables too — either pumpkin, winter squash, or sweet potato. Buns can be called petits pains in French. 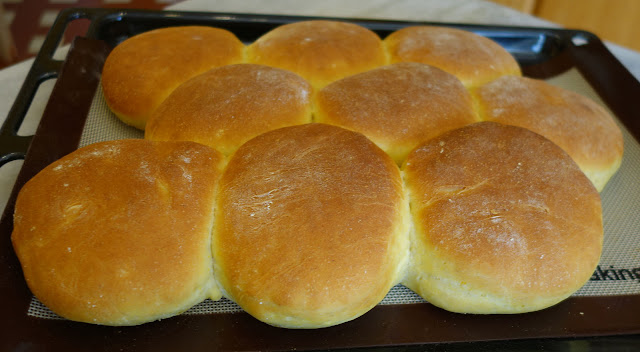 I use pumpkin or squash because we grow them in the vegetable garden. I haven't yet tried the sweet potato version of the buns. With the squashes (butternut, acorn, etc.) or pumpkin, what we do is roast them in the oven first (in wintertime), scoop out the flesh, and mash or puree it. It keeps well in plastic containers in the freezer. If you use sweet potato, you could cook it or them in the microwave. 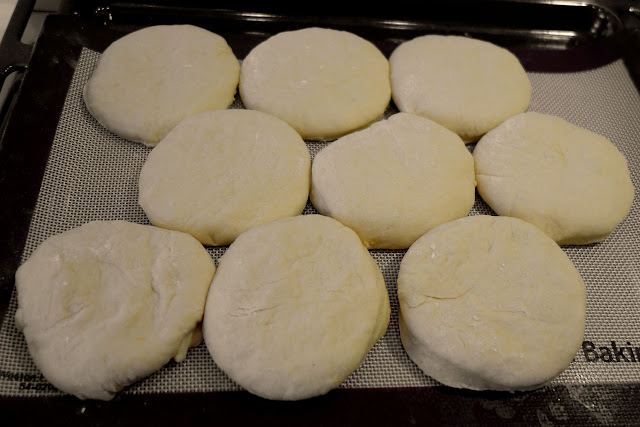 This time I made the buns using bread flour, called "strong flour" in some anglophone countries. I think I made them earlier using cake flour made from "soft wheat" varieties, which is the flour used to make buttermilk "biscuits" in the American South. You want the cooked buns to be soft, so I'll be curious to see (or taste) the result with bread flour. 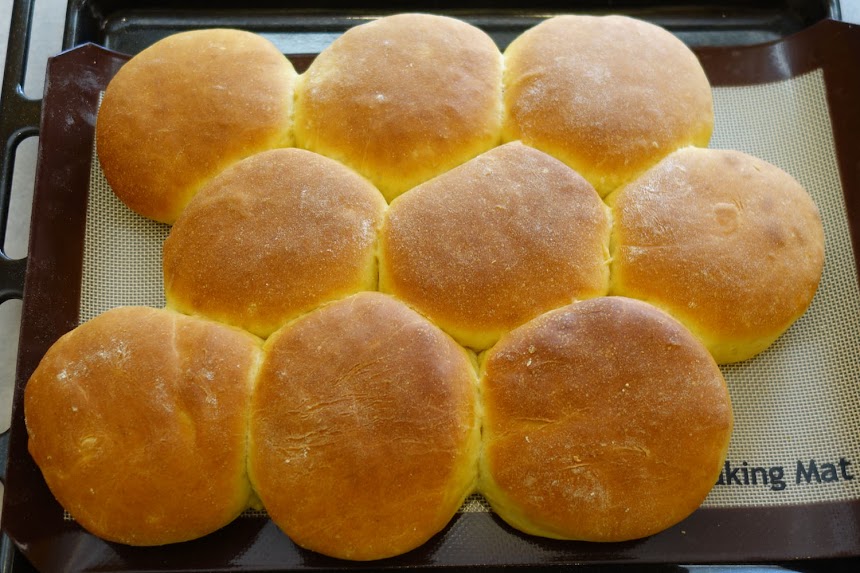 Sandwich Buns
made with pureed pumpkin or sweet potato

Don't add all the flour to the sponge at once. Whether you are kneading the dough by hand or using a stand mixer, add a good amount of flour to start and then gradually add the rest, as much as it takes, to make a ball of dough that is soft and just slightly sticky. Let the dough rise, covered, in a lightly oiled bowl in a warm place until it doubles in volume. It might take as much as two hours. (I've had good luck putting a bowl of boiling water in the oven with the bowl of dough and letting the dough rise. Don't turn on the oven yet, of course.)

Then "deflate" the dough by punching it down. Knead it by hand for a minute or two on a lightly floured work surface. Using your hands, flatten the dough on the floured surface so that it's less than an inch thick. With a 4-inch (10 cm) biscuit or cookie cutter (un emporte-pièce) cut out rounds of dough — the dough I made yesterday gave me nine big sandwich buns, as you can see.

Place the rounds of dough on a baking sheet so that they are touching each other. Let them rise again in a warm place so that they more or less double in size (another 40 minutes or so). They'll continue rising when you put them in a hot oven to cook.

Bake the buns at 400ºF (200ºC) for 10 to 15 minutes, or until lightly browned. When you take them out of the oven, cover them with a kitchen towel and let them cool completely. They should be soft and pillowy. Make them ahead of time and store the ones you have left over in plastic bags in the freezer if you're not eating them right away. 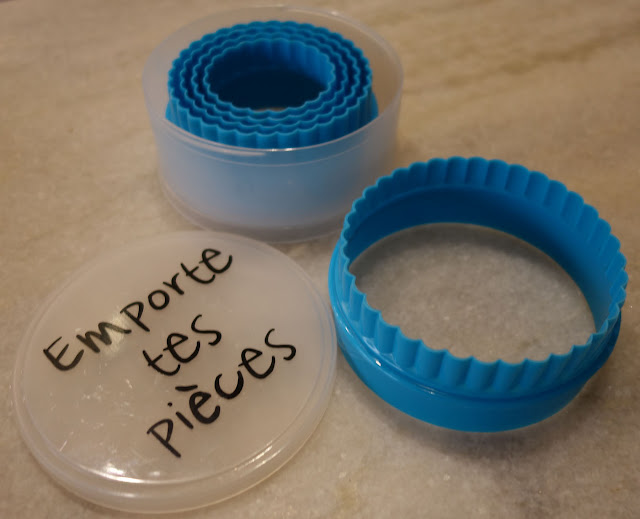 This is a set of emporte-pièces that we use. I think we'd call them cookie cutters in the U.S. You can use them to cut pastry into rounds that have either a plain or fluted edge. The largest cutter, which is the one I used, is about 10 cm or four inches in diameter.
Posted by Ken Broadhurst at 06:30