As I said yesterday, I ended up with a very busy morning. I had cooked a lamb shoulder in the mijoteuse (slow-cooker — mijoter means "to simmer") overnight. It cooked on low temperature for about 12 hours. It was lightly seasoned. The idea was to make "pulled lamb" (épaule d'agneau effilochée), which is good served in sandwich buns (petits pains).

So I had been thinking about making what we call "hamburger buns" or "sandwich rolls"— I'm not sure what the difference between a "bun" and a "roll" is. I just read on a web site that the U.S. federal Food & Drug Administration says the two terms are often treated as synonyms, but in general buns are softer and rolls are crustier. I wanted soft 'burger buns. In looking around on YouTube, I found a recipe for buns made with a dough containing mashed sweet potato. That reminded me of a pumpkin brioche that made a few years ago and buns like that sounded appetizing. See the photos above and below. 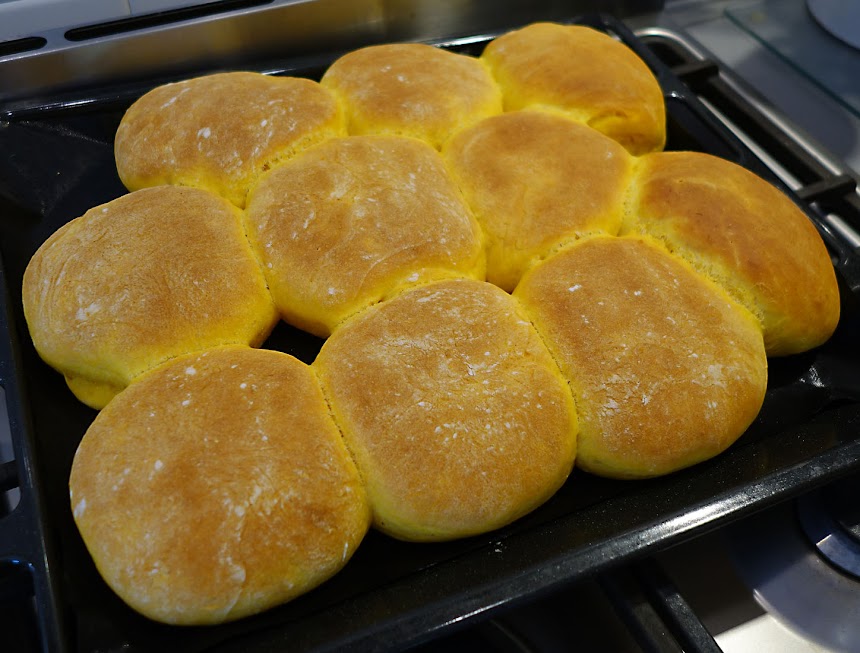 I didn't have any sweet potatoes but I had seen two containers of roasted and mashed winter squash pulp in the freezer. I made a dough with a cup of mashed pulp that we had labeled as sucrine du Berry, a local winter squash we've grown in our vegetable garden for years. It sort of resembles a butternut squash but the flesh is slightly different in texture and maybe not as sweet. As you can see, it worked well. Rather than give you a recipe, I'll point you to this video and this recipe, which I recommend. After the very soft and slightly sticky dough rose for 90 minutes (the instant dry yeast I used made it nearly triple in volume), I punched it down, pressed it into a maybe 2 centimeter thick oval shape on the work surface and cut out rounds of it using an emporte-pièce (a "cookie cutter" or "biscuit cutter" in American English). Those rounds rose again for 45 minutes and then baked for about 12 minutes in a fairly hot oven. They turned out perfect — 10 soft, bready, and tasty buns.

Above is the deboned, pulled lamb shoulder. "Pulled" means shredded, or effiloché in French. Recently I've also been cooking beef, the kind you used to make French pot au feu or bœuf bourguignon, which are comparatively inexpensive cuts, in the slow cooker. After whatever meat you choose is completely cooked and tender, falling off the bone if not already boneless, the pieces of lamb shoulder, stewing beef, turkey legs, or — more conventionally — pork shoulder, can be shredded or pulled apart (use your fingers or two forks) and then seasoned as you like. After adding seasonings, brown the pulled meat for a few minutes in a hot oven if you want a crispier texture. Spicy pulled pork that has been slowly barbecued over oak or hickory wood is a standard preparation where I come from (North Carolina). It's good served as a meat course with cornbread (hushpuppies) and cabbage salad (cole slaw) or in sandwiches on buns. 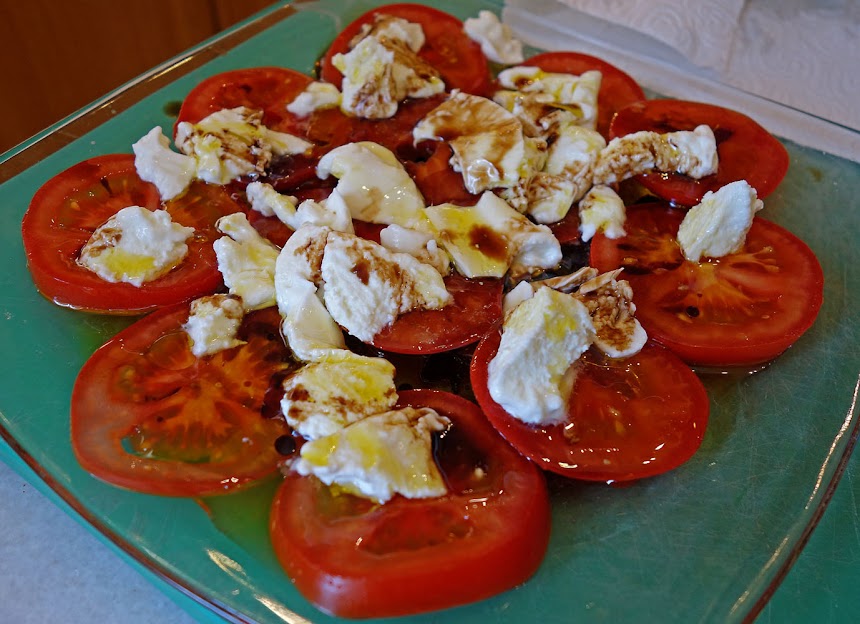 Often, Walt and I eat salads like the ones above as a kind of combined cheese and salad course at the end of a meal, before dessert. You can have it as a first course or "starter" to a meal as well. Walt bought tomatoes for this salad at the outdoor market in Saint-Aignan — it's far too early for our garden to be giving us tomatoes — and we got some packages of mozzarella di latte de bufala — mozzarella made with the milk of the Italian water buffalo (lait de bufflonne). I'm sorry I didn't take a picture after Walt tossed some fresh home-grown basil leaves over the salad. Anyway, I bet a lot of people don't realize that mozzarella cheese is traditionally made with buffalo milk. Much of the mozzarella you find in supermarkets is made with plain cow's milk.
Posted by Ken Broadhurst at 06:45