It's actually ratatouille. I've written about the word and the dish before. The word seems to be derived from two terms that merged — ratatiner, which means "to shrivel up, to get wrinkled", and touiller, which means "to stir, to mix". The Grand Robert unabridged French dictionary says that ratatouille, in current, everyday language, means: Plat d'origine niçoise, mélange de courgettes, de tomates, d'aubergines, etc. cuites ensemble à l'huile. It's pronounced [rah-tah-TOO-yuh] with the stress on TOO and a very slight final yuh sound. 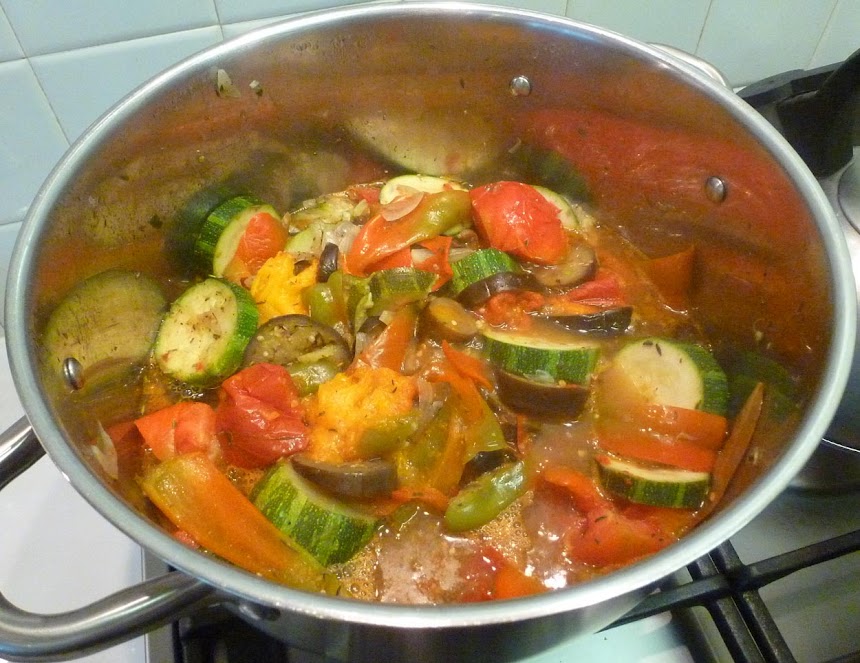 Right now, we have the tomatoes, the eggplant (aubergines), the zucchini (courgettes), and the bell peppers (poivrons) — that's for sure. We have onions, garlic, and olive oil, and we have herbs (thyme, oregano, etc.). Walt used all that to make a big batch of ratatouille yesterday, some for eating this weekend and some for storing in the freezer for later. 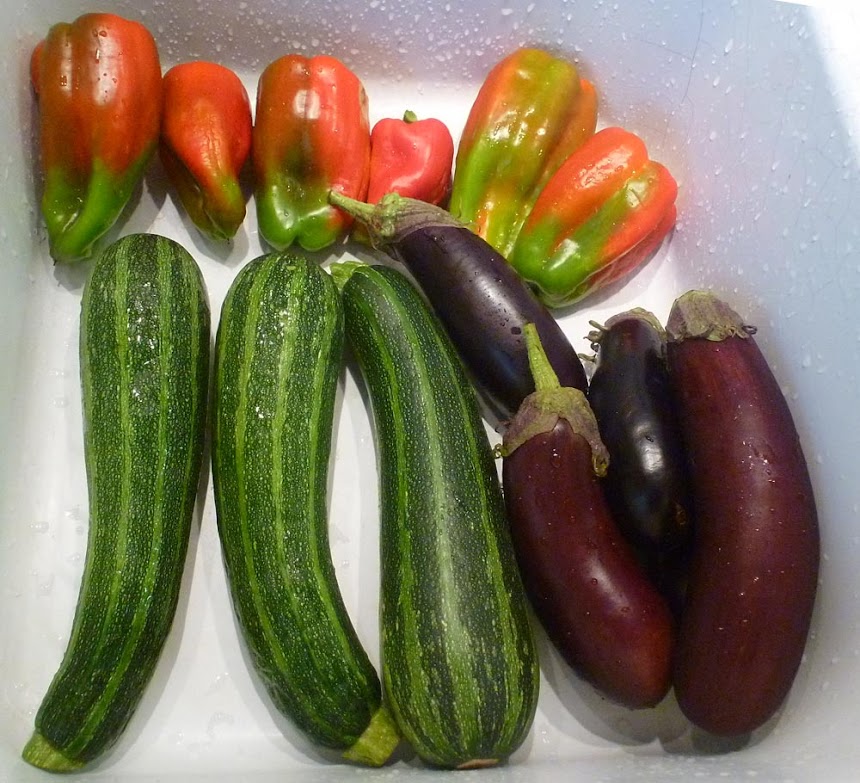 I remember the first time I ever heard of ratatouille, and tasted it. I was in Marseille. It was the spring of 1970, when I was a 21-year-old student in nearby Aix-en-Provence. I don't know why I went to Marseille, and I think I was by myself — again, I don't know why. Maybe I was meeting somebody who was coming in by train, and then taking the visitor back to Aix. Anyway, I had lunch in a sidewalk café, and feeling adventurous, I ordered ratatouille, which I had never heard of before. It was delicious, and it seemed very exotic compared to the North Carolina cooking I had grown up on. 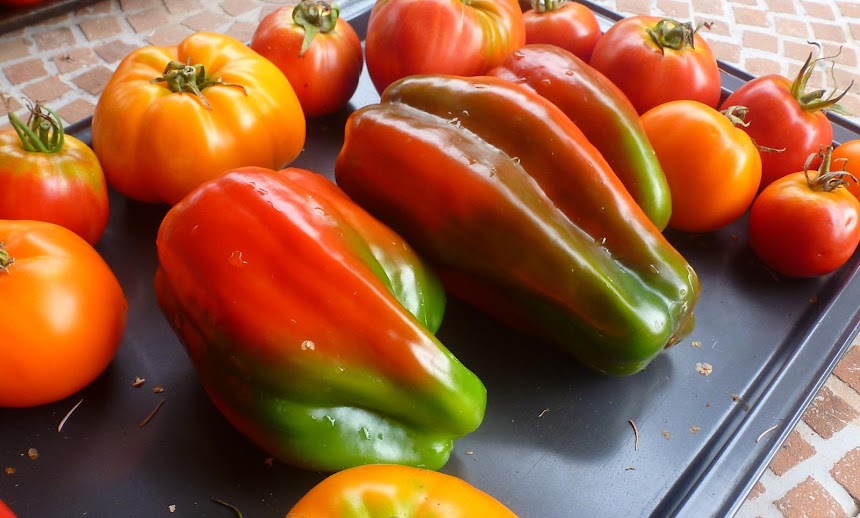 There are many styles of ratatouille. Some call for cooking the onions, garlic, bell peppers, eggplant, zucchini, and tomatoes separately in olive oil and then layering them in a big pot to let them finish getting ratatinés but not doing much touillage (see Julia Child...). Other styles go to the opposite extreme of stirring the vegetables vigorously as they cook down and shrivel up, and then crushing the who mixture with a potato masher to make the ratatouille into a more or less homogeneous mass. Below is a recipe we use (Monique Maine's), for ingredients and proportions as much as method. 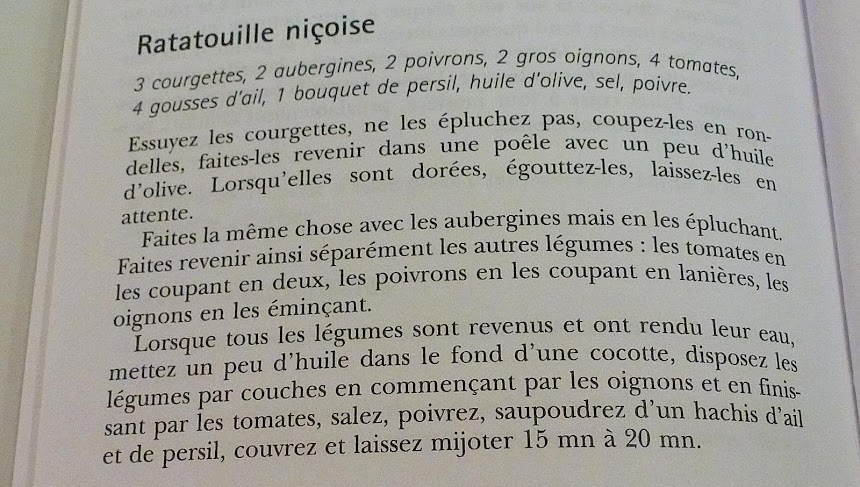 Walt took the middle road, doing a good bit of touillage but not cooking the ratatouille so long that all the vegetables started to melt into the cooking liquid. He said he likes to have some chunks of vegetable left when the ratatouille finishes cooking. You can always cook the chunky mixture down to make it smoother and more homogeneous later if you decide you want that, but you can't put the vegetables back together again once they've disintegrated. In fact, some versions of ratatouille are not stirred at all — they are vegetables baked in a dish in the oven. 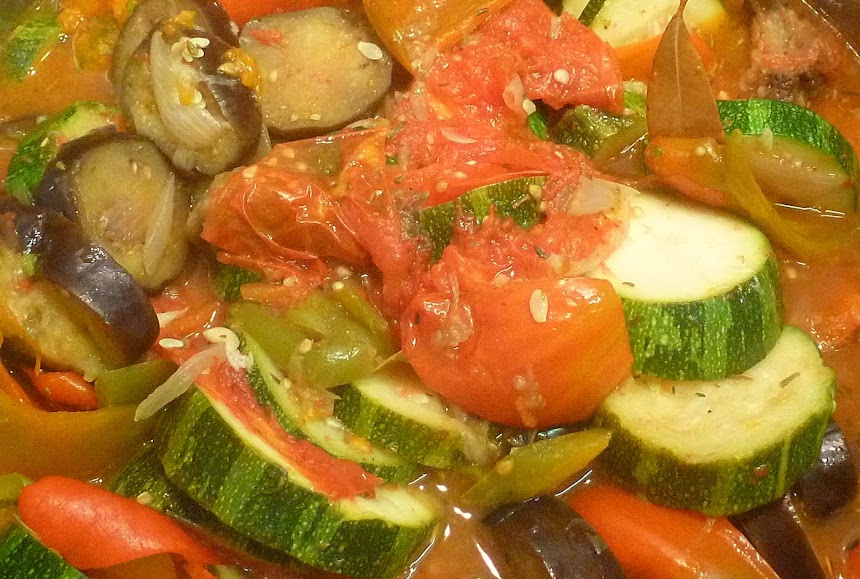 Did I mention that I've never been able to find mention of ratatouille in the exhaustive Larousse Gastronomique food encyclopedia?  Ratatouille is not your classic Parisian gastronomical delicacy. It's more rustic. It's from Nice, and Nice wasn't even part of France until about 150 years ago. Maybe ratatouille is in some other edition of the Larousse Gastronomique, but I can't find it in the one I have. Mine's in French, not English, and was published in 1967.
Posted by Ken Broadhurst at 07:25