C'est l'appareil qui fait la déshydratation. I decided it was time to try one, and I found one on Amazon.fr for about 45 euros ($50). I'm not sure how much we will use it, but I'm sure we'll at least use it during tomato season each year. I also have a huge crate of walnuts in the garage that I'll try to crack open and dehydrate this winter. 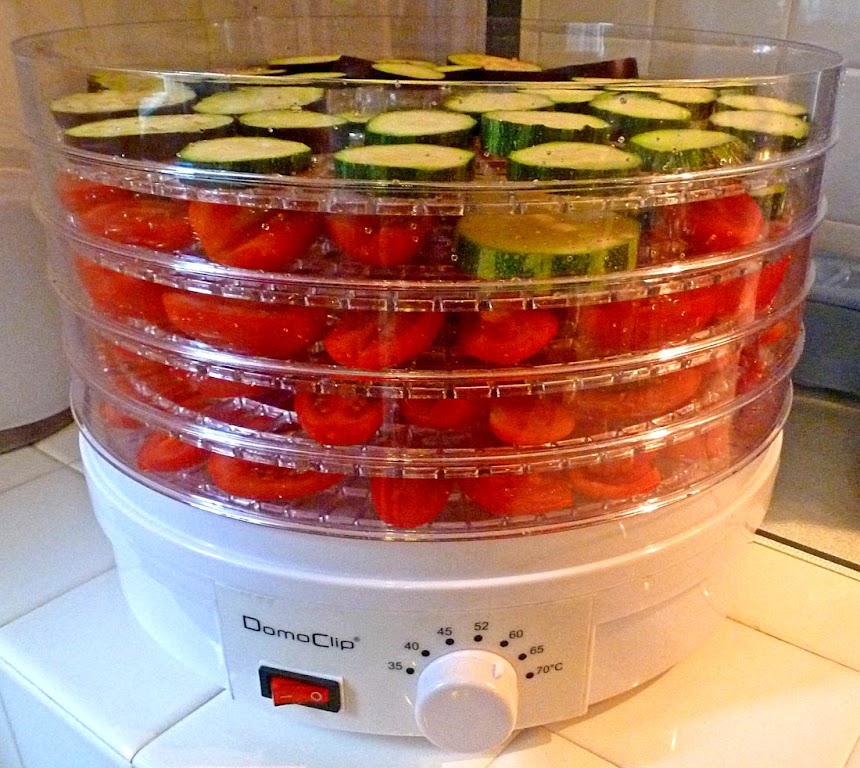 Loaded up and ready to go


Yesterday I prepared enough tomatoes to fill three dehydrator trays. I used mostly small Juliet tomatoes, which are like mini-Romas. All I had to do was to cut each tomato in half and cut out the core. That took a while, but it's a kind of work I don't mind doing. 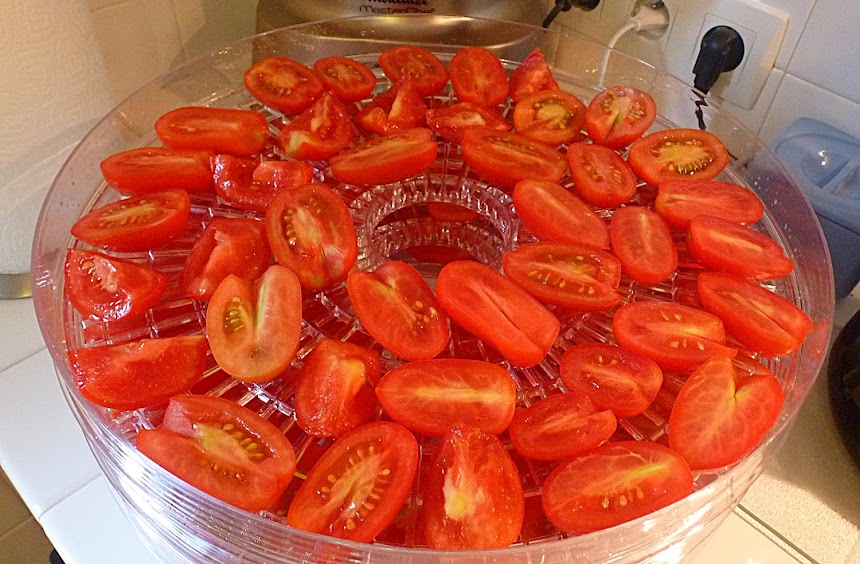 I had three full trays and one partial tray of tomatoes like this for our trial run.


I had some room left over inside the machine, so I sliced up a couple of zucchinis and an eggplant, just to see how well they would dehydrate. I turned the dehydrator on at about 11 a.m. and let it run for 10 hours at a temperature of 60ºC / 140ºF. 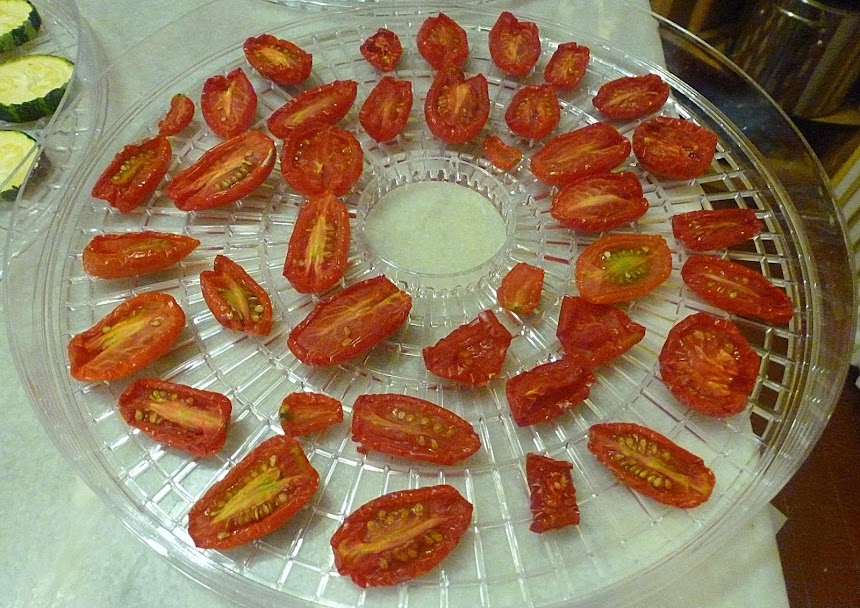 Here's how the tomatoes looked this morning after 10 hours of drying and 10 hours of resting overnight.


Because it's a new machine and because we want to watch the progress of the vegetables we're drying this first time, I turned the machine off at bedtime and just let it sit there, all loaded up, overnight. This morning, I can see that one tray of tomatoes is much dryer than the other two. The thinner slices of eggplant and zucchini are pretty much ready, but some thicker slices will take more time. 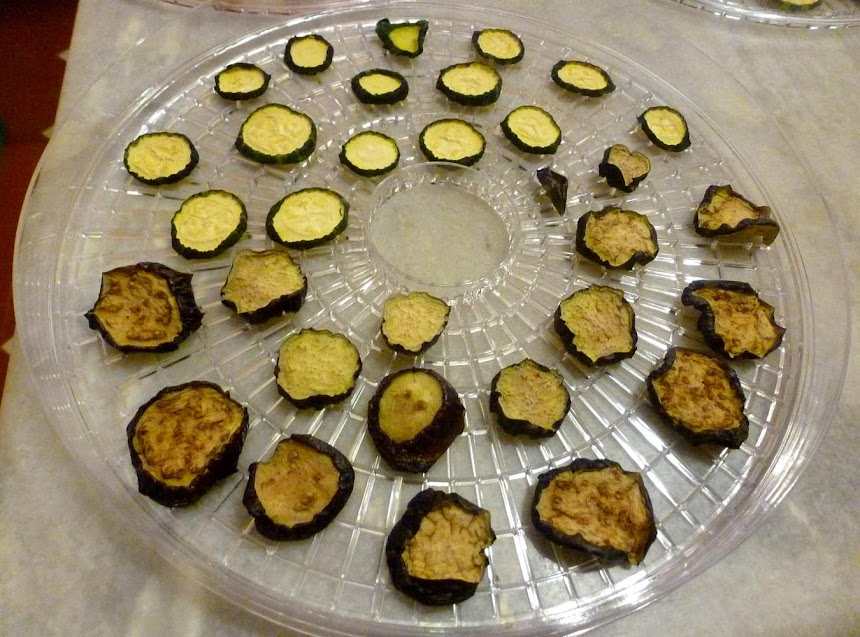 These thin slices of eggplant and zucchini are almost ready to take out and pack for storage.


The book that came with the dehydrator says to remove the vegetables that look sufficiently dried out as you go, leaving the others in the machine for a longer time. You want the vegetables to be completely dried out but not crispy. I haven't yet decided how I'll pack the tomatoes for storage when they're done. The easiest thing to do would be to freeze them, but I might put them up in jars the way I did the oven-dried tomatoes I made a few days ago. 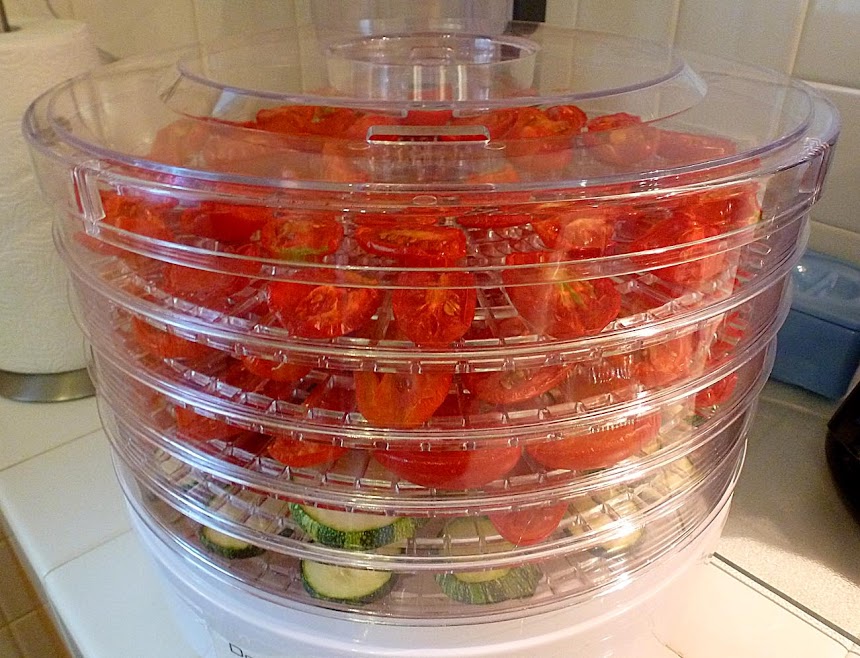 Here's how it looked when I inspected the dehydrator this morning and turned it back on.


The dehydrator itself gets good customer reviews on Amazon.fr. The main criticism is that the plastic trays seem pretty fragile, so you have to handle them carefully. Noted.... The dehydrator can be set to run at different temperatures, from 35º to 70ºC (95º to 160ºF). It doesn't have an on/off timer, but I can use a lamp timer to add that option.
Posted by Ken Broadhurst at 07:15