The other day I cooked some garden green beans according to a recipe called Haricots verts à l'albigeoise — Green Beans Albi-Style. (Albi is a town in SW France, near Toulouse and the Pyrenees mountains.) Anyway, the green beans are cooked with shallots, mushrooms, and smoked-pork lardons (chunks of bacon). More about that later. 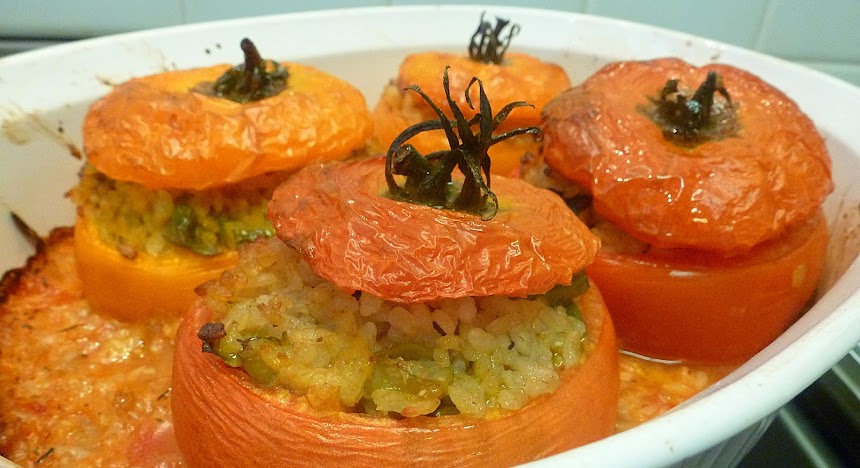 We enjoyed the green beans, and then we talked about making tomates farcies, or stuffed tomatoes, with some of the biggest tomatoes we have gotten from our garden for the time being. Walt said it might be a good idea to make a stuffing with the Albi green beans. It was a good idea, as it turned out. 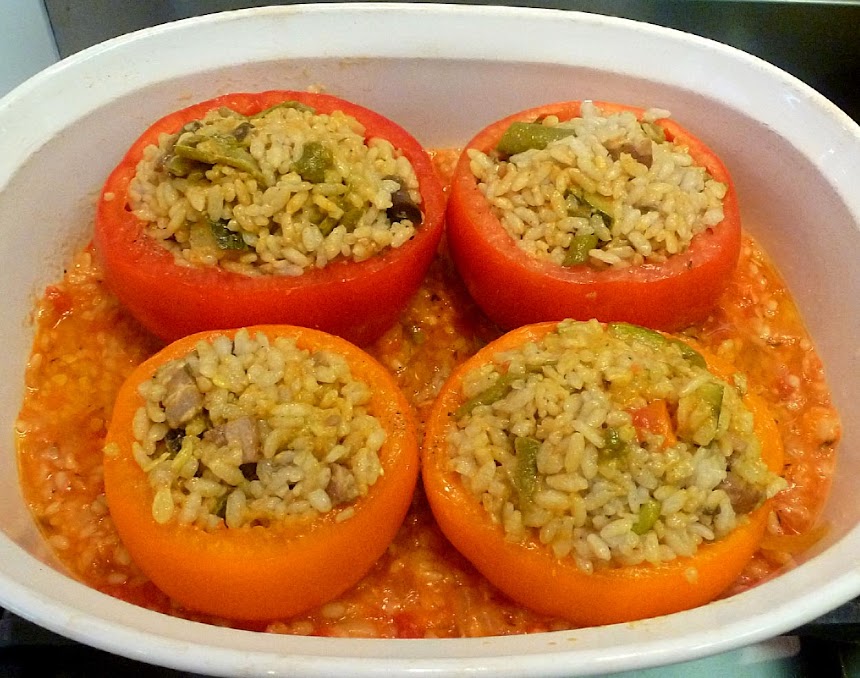 I warmed up the leftover beans and poured the mixture through a colander to get the liquid, which I wanted to cook rice in. I added some chicken broth to stretch it a little and I cooked some riz rond, or short-grain rice, in it. I added a few more leftover ingredients — some diced, cooked carrot and zucchini, for example. Then I mixed the green beans, mushrooms, and lardons into the rice. That made a good stuffing for tomatoes. 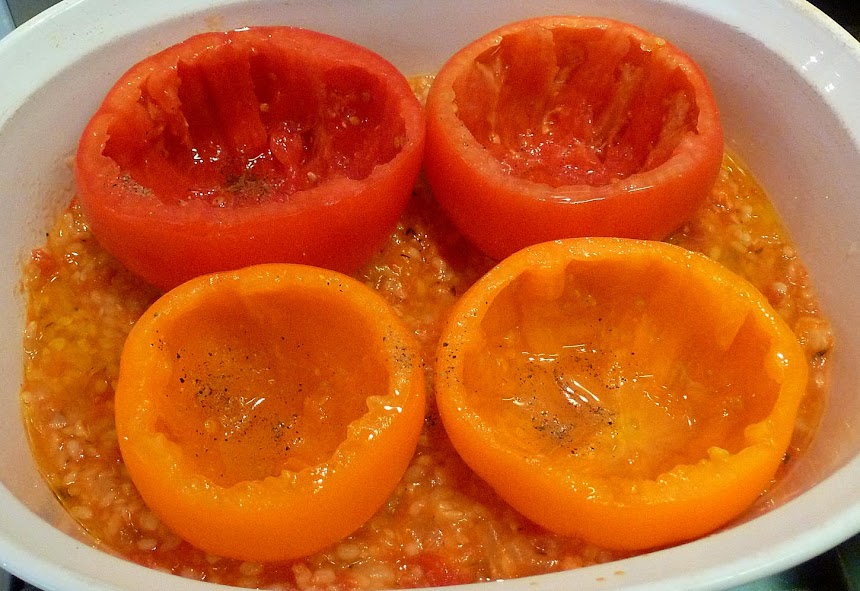 The next step is to cut the tops off a few big tomatoes. Save them. Then you scoop out the tomato pulp, seeds, and juice, leaving just a shell of tomato that you can fill with the rice stuffing. I use a grapefruit knife first, and then a spoon to scoop everything out. Sprinkle some salt inside each tomato shell and turn them upside-down on a plate to let them release their excess liquid. They'll roast better after that. 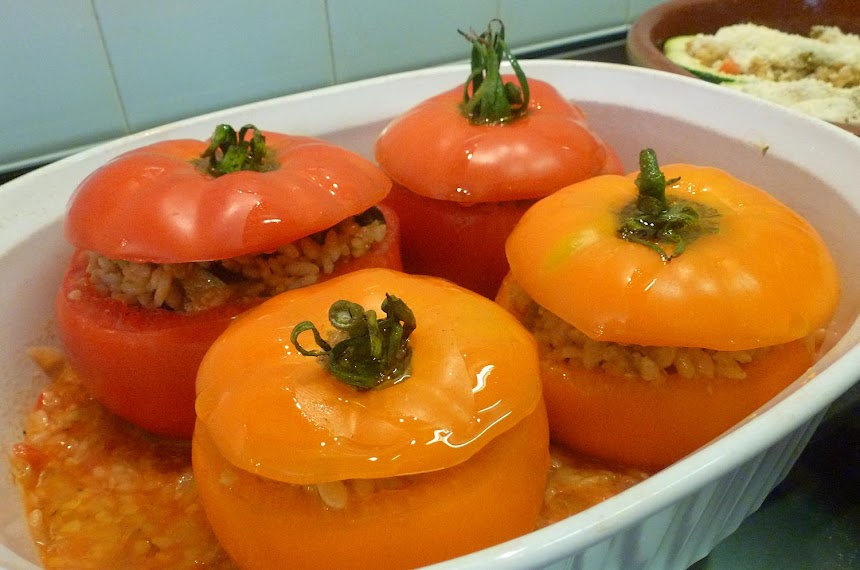 Don't throw the pulp away! Remove any tough green parts and cook the rest of it with some onion in a frying pan. Add some zucchini or eggplant pulp if you have any, and toss in a small handful of rice. Let all that cook down for a minute until it starts to thicken, and then use it as a sauce in the baking dish you plan to cook the stuffed tomatoes in. It will keep the tomatoes from rolling around in the dish, and it will make a nice sauce to spoon over the rice stuffing at the table. 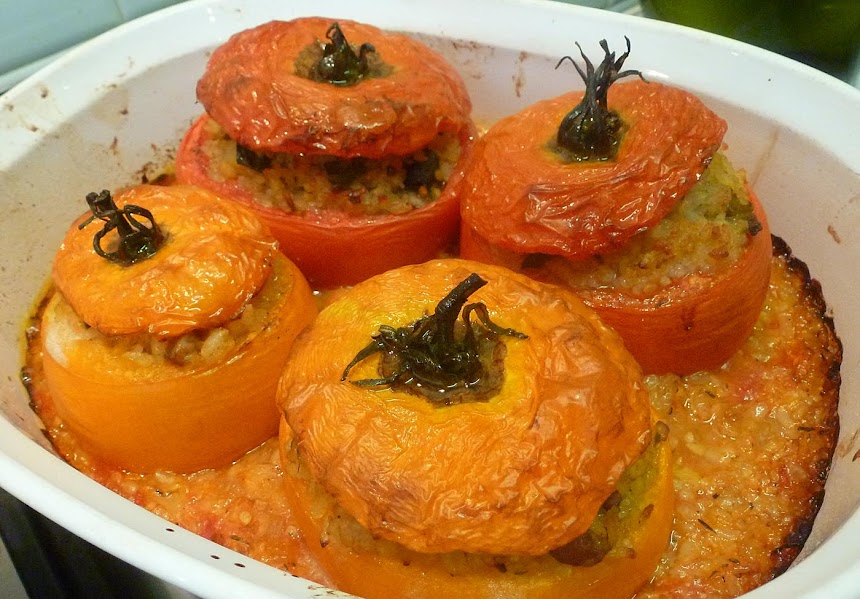 Spoon in the rice stuffing. Cover each tomato with its top and drizzle some olive oil over them. Cook the tomatoes in a moderate oven for 30 to 45 minutes, until they are slightly shriveled but not collapsing. Serve them hot right out of the baking dish. You can also stuff tomatoes this way with sausage meat, or ground beef, chicken, or turkey.
Posted by Ken Broadhurst at 07:30