A flood cometh before the fall

Yesterday, I went to the market down in Saint-Aignan. We wanted some strawberries. The man we buy them from was there, despite the widespread flooding. He and his son grow the berries over in the sandy soil of the Sologne woods, on the opposite side of the river from where we live. He apologized and said the berries would be sweeter and juicier if the weather weren't so gray and chilly. We think the strawberries are pretty damn good anyway. 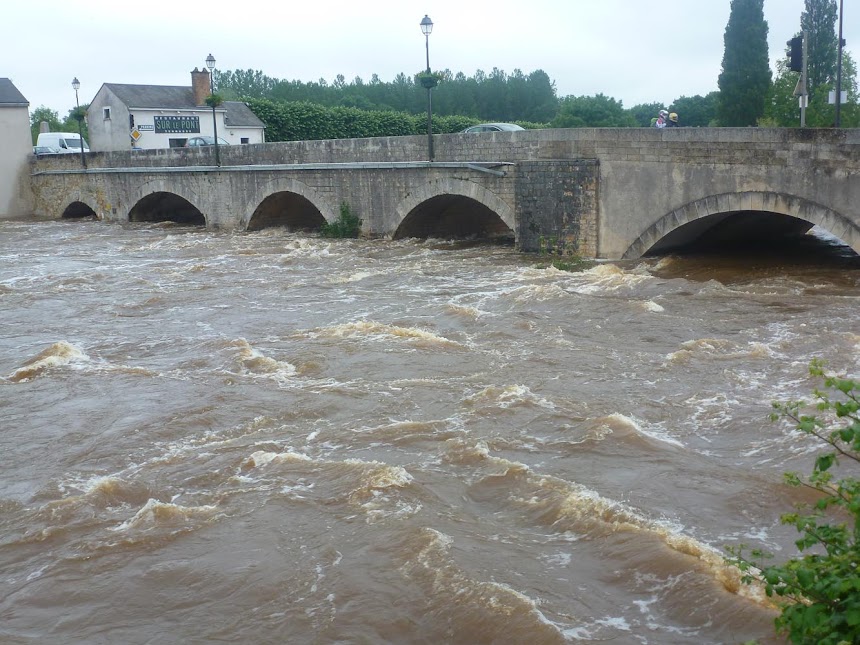 
Above is a photo of the Saint-Aignan bridge that I took yesterday. Below is one that I took in May 2010, which I found on the blog. These images clearly show the difference in the level of the water. 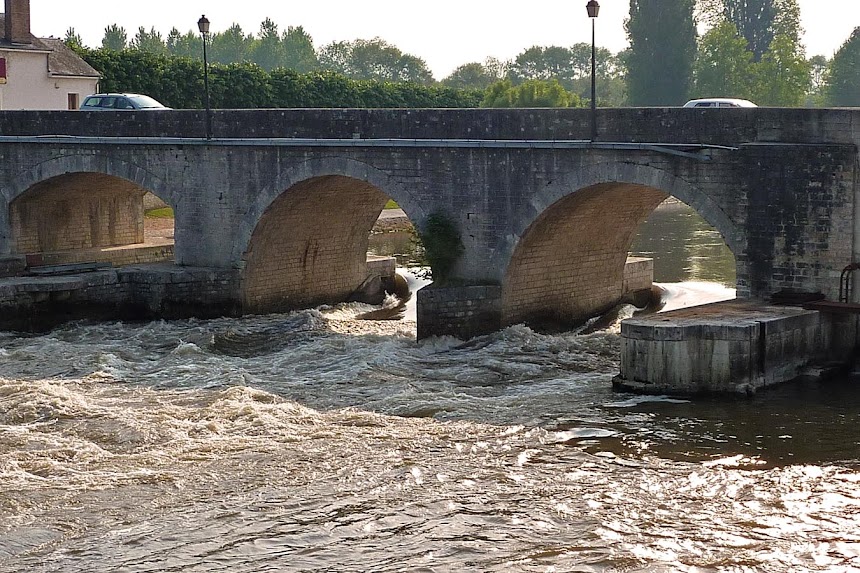 
I parked near the river, and I had remembered to take my camera with me. The water level wasn't visibly different from what I saw on Thursday afternoon, the last time I went to look. In other words, the flood hasn't subsided but hasn't gotten a lot worse either. All the regular vendors seemed to be present at the market, and while it wasn't what you'd call crowded there were quite a few shoppers out and about. 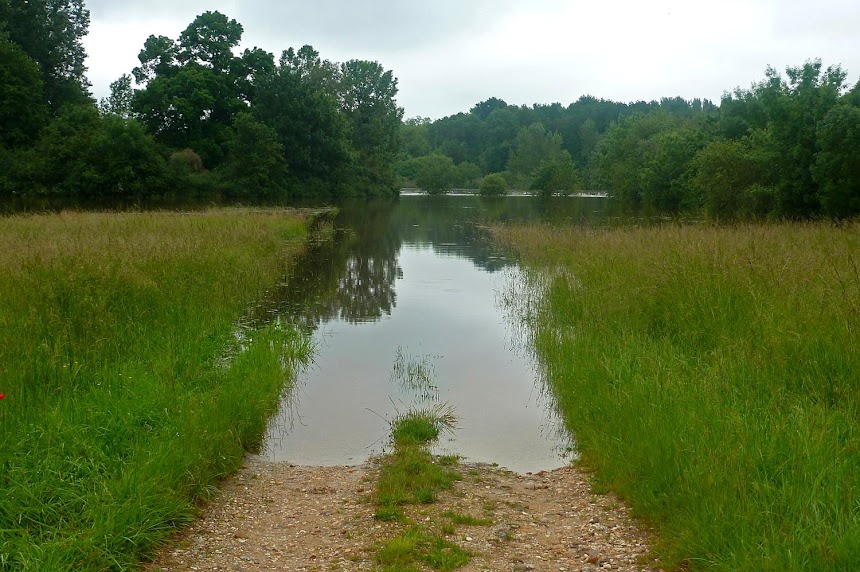 For now, the road ends here. Those little bushes and trees in the middle of the image are on the normal riverbank.


After I went to the market, where I got not only three little tubs of strawberries but also a bunch of local white asparagus and a pound of local mushrooms, I decided I should walk up to the château grounds and take a few photos of the river from up there. In the image below, you can see that the park on the island across from Saint-Aignan is almost completely submerged. 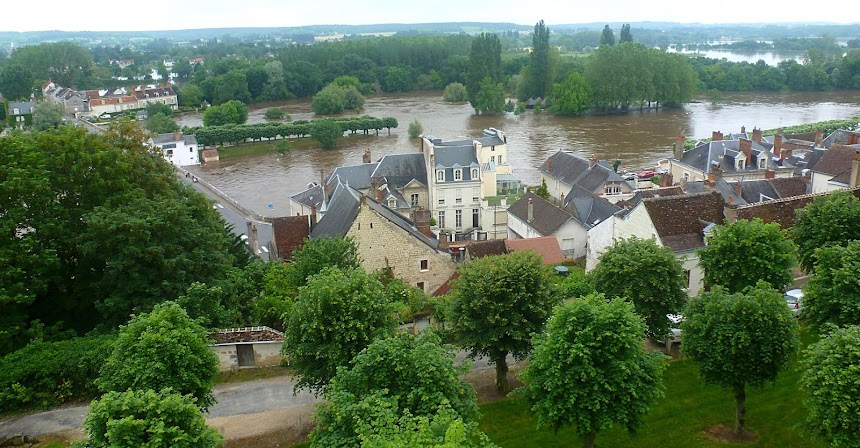 Several other people had the same idea but for a few minutes I had the château terrace all to myself. From up there you have a panoramic view toward the north, taking in the Cher river and a body of water that's called Le Lac des Trois Provinces, on the upper right. The old Sologne (in the Orléanais), Berry, and Touraine provinces meet here at Saint-Aignan. 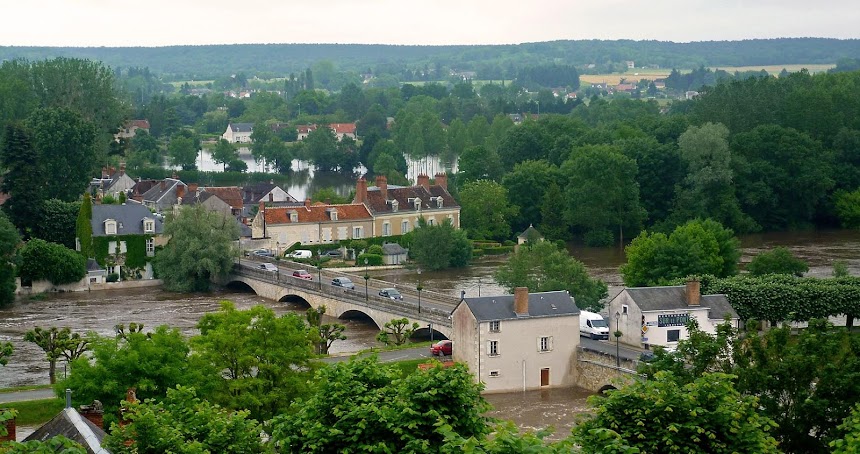 As I was walking back down to the car, I made a bad move. I decided to take a shortcut that involved walking down the little old stone staircase you see in the image just below. I knew it was dangerous and I was being as careful as I could be. There is no hand rail. I was carrying my camera in one hand (on a wrist strap) and my shopping basket with the other. 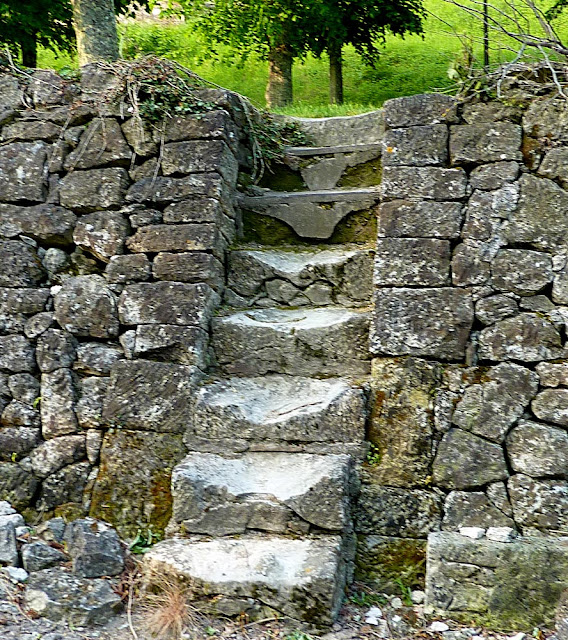 The first two steps down were fine. But when I put my foot on the third step — the first that is so worn down by centuries of use — my shoe found no grip at all.

I hadn't realized the damp stone would be so slippery. My right foot slid right out from under me and down I went on my gluteus maximus... bump bump bump... all the way to the bottom.

I guess I'm lucky I didn't hit my head on one of the steps as I slid down on my backside. I was busy trying not to crush the strawberries or break my camera. I didn't do either. I'm a little bruised, but not really injured. And feeling stupid.
Posted by Ken Broadhurst at 07:20