Greens and cheese for the season

You know, the air-conditioning in the Peugeot — climate control, really, because it is a climatisation automatique unit on which all you have to do is set the temperature you want and it does everything else — doesn't seem to be working right. It doesn't really blow cool, dry air right now. The car is 15 years old... I ought to take it to a shop and have the clim' recharged, but why bother? 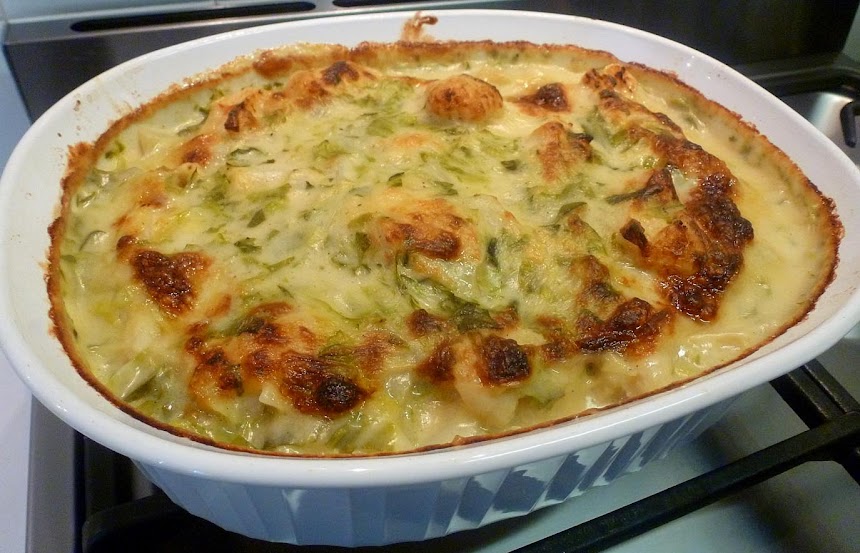 Not really summertime fare, but then...


Yesterday morning the boiler fired itself up and heated up the radiators all through the house. On June 15! And with the thermostat set for about 65ºF (18.5ºC)! This reminds me of San Francisco weather. Why spend 100 € on the car's AC when what you really need is just a little heat. Well, some dry air might be a good thing, because it just won't stop raining outside. 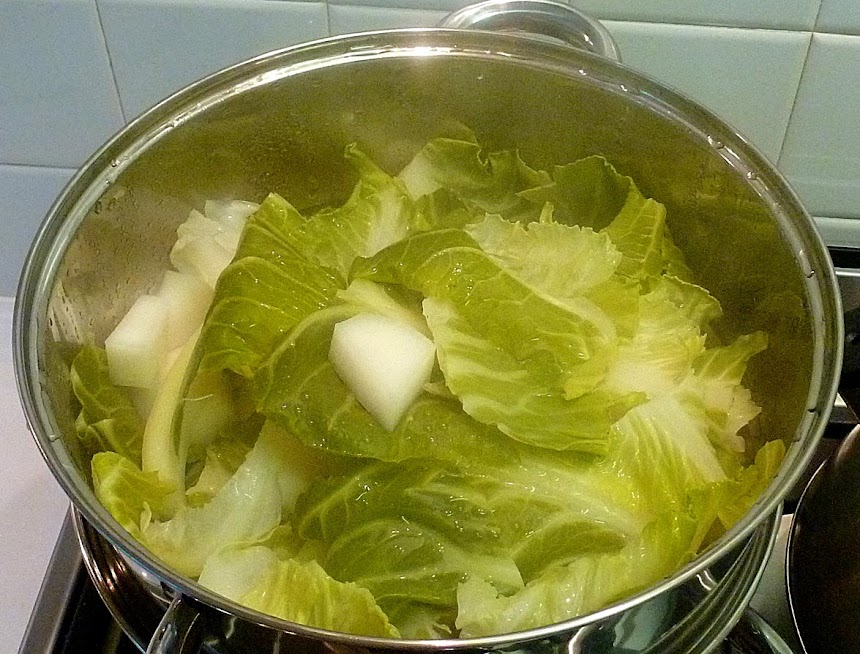 It's not steady rain, but it rains for a while pretty much every day. We have collected 70 mm, nearly 3 inches, or water in the rain gauge since June 1, and that doesn't count what fell last night. Remember how much rain we were afflicted with in May? It rained a flood — literally. 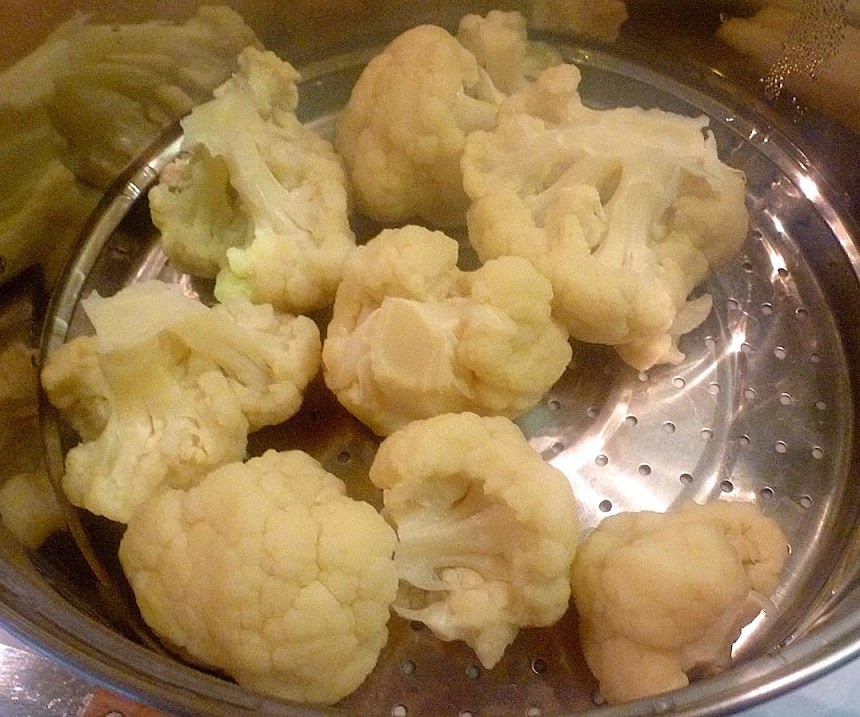 Florets, but not many


So I'm cooking wintertime comfort foods for our lunches. Like gratin de chou-fleur — cauliflower au gratin, we might call it in good English. Here's a recipe. I cooked this a few days ago and we enjoyed it for a couple of meals.


And here's what I learned: if you buy a head of cauliflower the way it did, completely wrapped in a thick layer of pretty green leaves with fat white ribs, don't throw those out. The leaves and their ribs are really good in the gratin along with the flower head. It's another way to eat your greens, and you know I advocate that as an important part of a healthy diet. 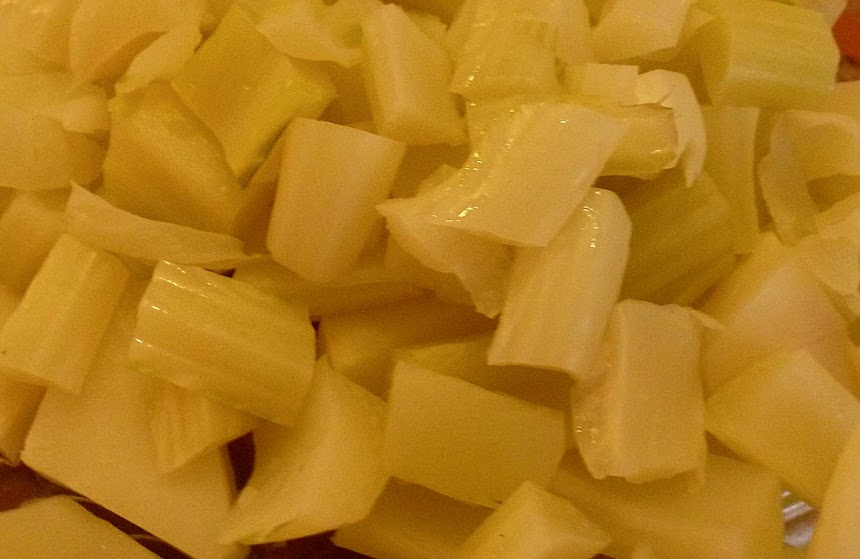 The leaf ribs steamed and cut into pieces


Actually, the cauliflower I bought turned out to have a fairly small flower head. Once I had broken or cut all the leaves off of it, there wasn't much left. That's what motivated me to cook and eat the leaves too. I steamed them in the steamer first, and then I steamed the florets the way I usually do. I figured I could taste the leaves after they had steamed and then decide what to do with them. 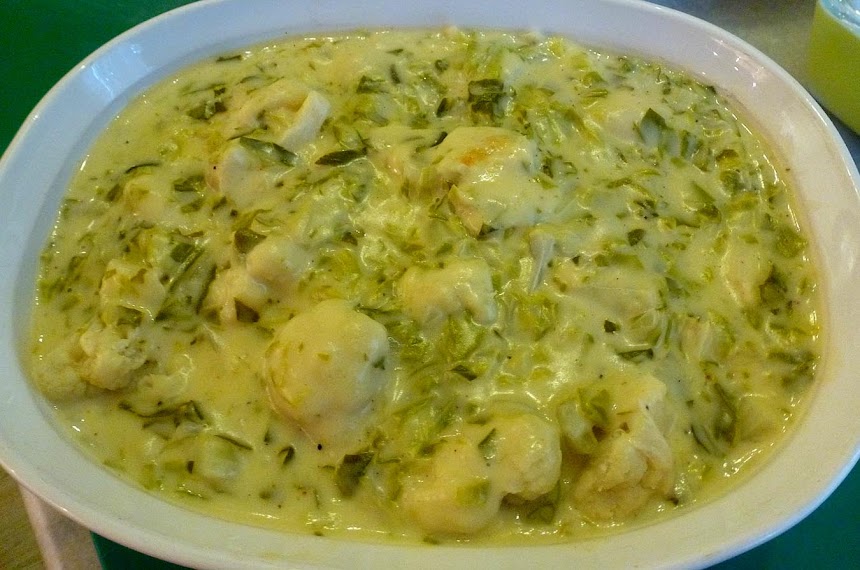 Ready for the oven — leaves, ribs and all


What I did with them was to cut the leafy green parts off the ribs. I cut the ribs up into pieces and added them in with the steamed florets. Then I chopped the green parts finely and mixed those into the cheese sauce before I poured it over the florets and ribs and baked it all in the oven. I think you can see from the photos what I'm talking about. I made the cheese sauce using some Cantal cheese and some white cheddar that Walt brought back from his recent trip to New York state. It was all good.
Posted by Ken Broadhurst at 07:01