A few days ago I wrote about summer salads. Then our hot weather cooled down and eating vegetables hot rather than cold became a happy prospect. My idea was a North African vegetable soup served with the tiny pasta called couscous. I've blogged about it many times of the years. 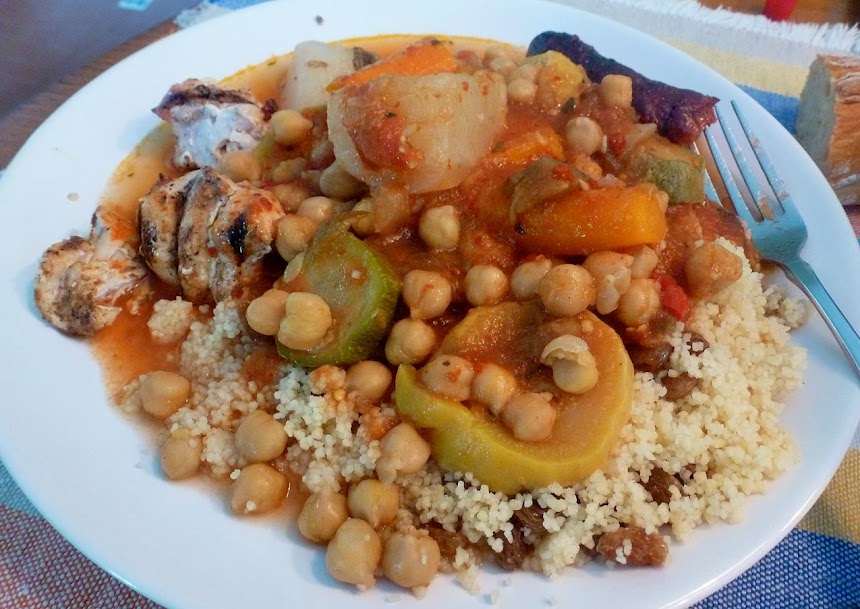 There are two or three indispensable ingredients in couscous besides the couscous "grain" itself. One is tomatoes. Another is chickpeas. And carrots... turnips... zucchini... onions. Not to mention the hot pepper paste called harissa. We had all those. We also had raisins to add to the couscous, and that's a nice flavor touch, making the couscous both sweet and spicy hot. 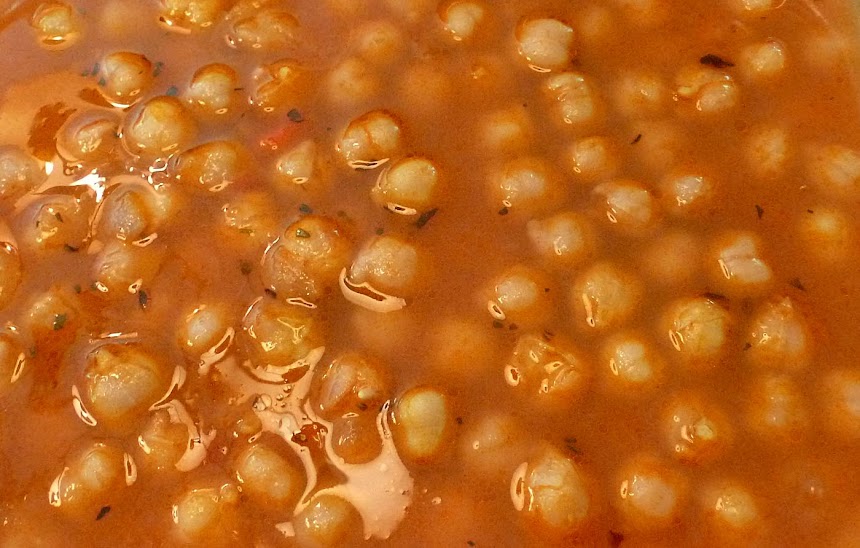 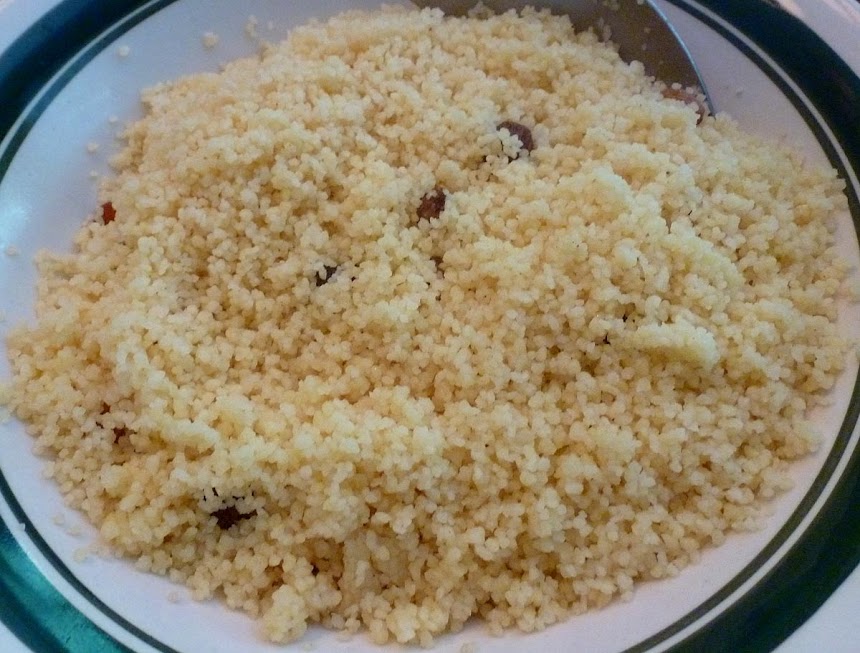 My couscous broth (the soup) this time was unconventional in several ways. Other things that are good in couscous are eggplant and green bell peppers. It dawned on me that those also go into the southern France dish called ratatouille, which also includes tomatoes, onions, and olive oil. I had some ratatouille in the freezer, and I used it as the base for my couscous broth. 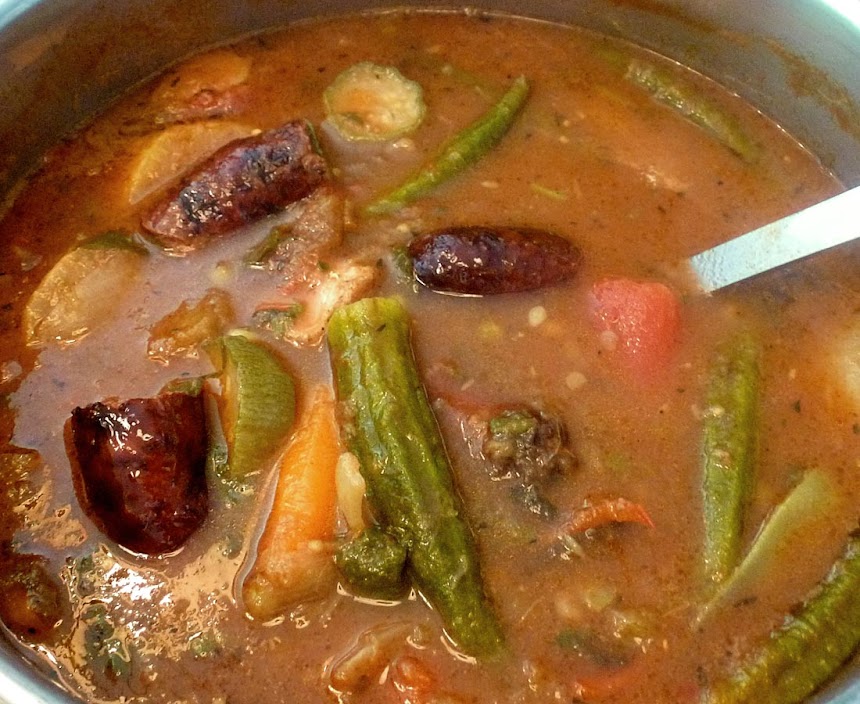 I also added a few okra pods to the mix. Some fresh snow peas from the garden. A couple of leftover steamed new potatoes. It's free-form, really. We had a couple of chicken breasts, cut into chunks, spiced up, and put on skewers for grilling. And we had some spicy sausages called chorizettes that also went to cook on the grill. 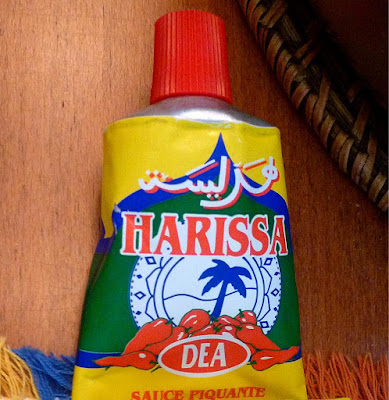 The ingredients that turned the ratatouille into a soup were about a pint of chicken broth, the liquid from a can of tomatoes, and a couple of tablespoons of the North African spice blend called ras el hanout. The mixture varies, but the one I used included spices like curry, coriander seed, cumin, carraway, and cayenne. I added some more hot red pepper in the form of harissa. 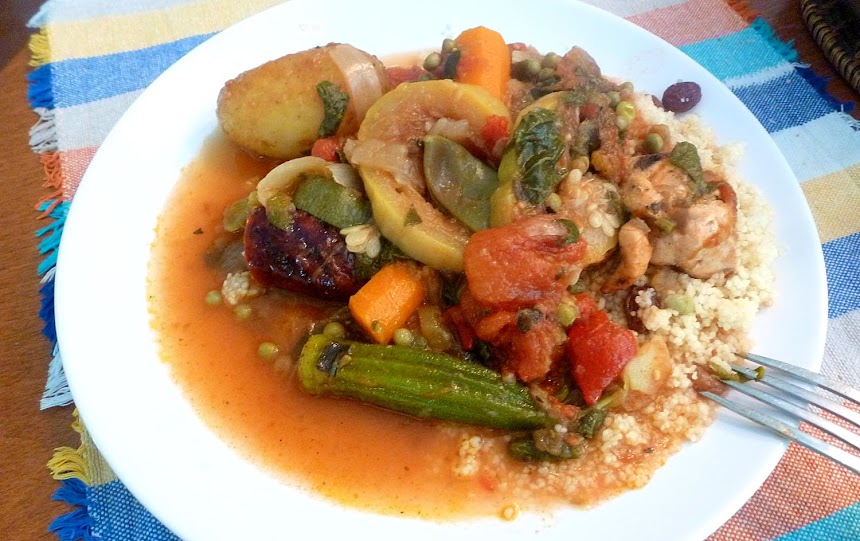 When you eat couscous, you put a pile of the "grain" (a form of pasta, really) onto your plate and then you spoon some broth and some big chunks of vegetables over it. You put a squeeze of the spicy harissa paste into a ladle, scoop out a little more soup broth, mix it well, and then dribble or just pour it over all. You can make it as spicy as you like. And the spiciness is what turns a soup that might be good in the cold of winter into something that's also really good when the weather outside is hot.
Posted by Ken Broadhurst at 07:30