Glad to be on high ground

I had to go out yesterday afternoon and I decided to take some photos of the Cher river around Saint-Aignan. Even though our heavy rains of the last week seem to have stopped, the level of the river is very high. The flooding here is not catastrophic, at least for the moment, but I'm not sure the river has crested at this point. 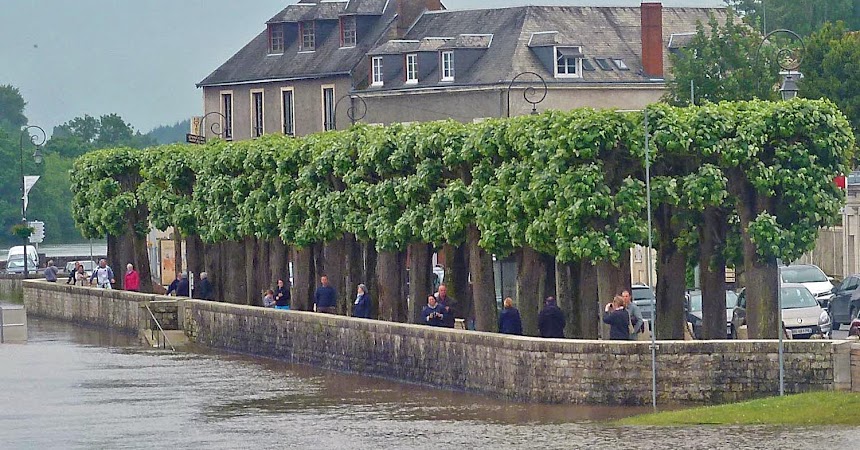 
I took over 200 photos yesterday — a third of them in the kitchen, a third down on the river and in town, and a third out in the vineyard on my walk with the dog. I'll focus on the river today. When I went into Saint-Aignan (pop. 4,000), I was surprised by the number people who were out taking in the scene. As a friend said, it was as if a couple of big tour buses had driven in and dropped off crowds of curious people. But I saw no buses.


It's hard to choose which photos to post, and it's hard to give you an idea of the scale of the flooding unless you are pretty familiar with the area and know what the Cher normally looks like. One of the most disturbing pieces of news is something I read in the local newspaper (here's a link to the article, with photo): the fast-flowing floodwaters are threatening the structural integrity of the Saint-Aignan bridge. Experts and engineers are assessing the situation. 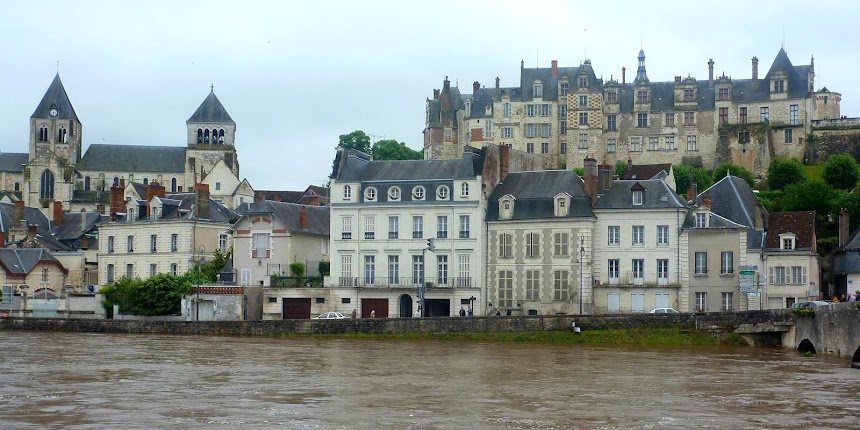 The church and château at Saint-Aignan, high above the flooding river


Maybe words are better than pictures in this situation. The reason I went out was to get my hair cut at the salon down in the village center. The young woman who runs the place (she took it over from Madame Barbier a couple of years ago) was obviously under a lot of stress.

Looking across the Cher from Saint-Aignan


She told me she had gone home at lunchtime to find that her house was starting to flood. Her partner and a friend were in the process of moving all the furniture out. Water had started coming into their garage early in the morning, and because the house is all on one level, that meant there would probably be a certain amount of water all through the place. 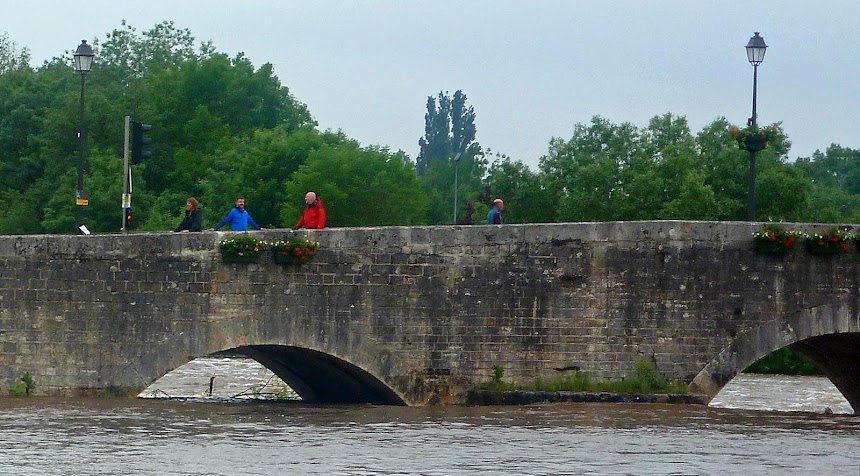 The bridge at Saint-Aignan


The woman and her partner live on the east side of Saint-Aignan near a big campground on the river at a place called Les Cochards. She told me that when she got home around noontime, she was surprised to find 9 or 10 little rabbits in her garage. Her partner's mother had rescued them from the floodwaters, not wanting to see them drown. 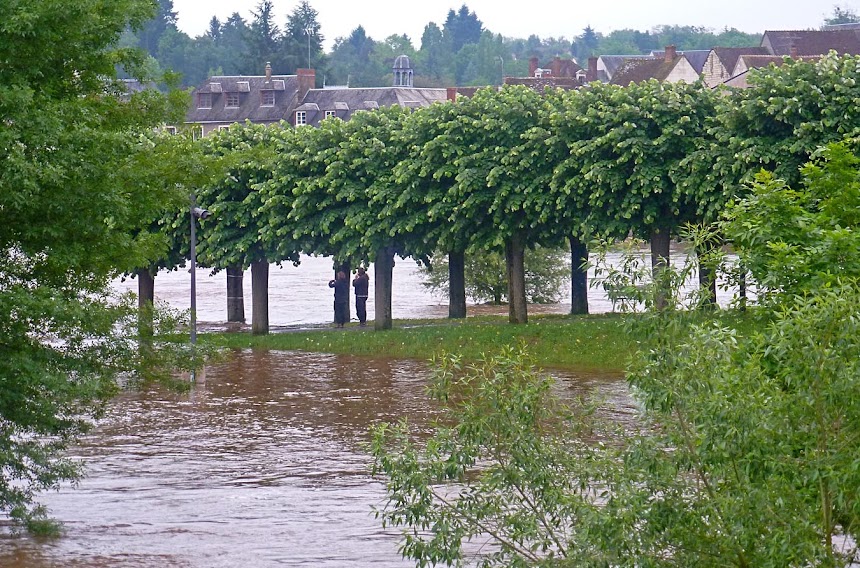 The island across from Saint-Aignan is mostly under water.


She also said that a neighbor had also come home for lunch and was in tears because the chickens he keeps in his back yard had all drowned during the morning hours when the river rose. And she said the man who runs the nearby campground was also in tears because his office building and all the little mobile-home bungalows he rents to tourists had waist-high water in them. He has probably lost everything, she said. 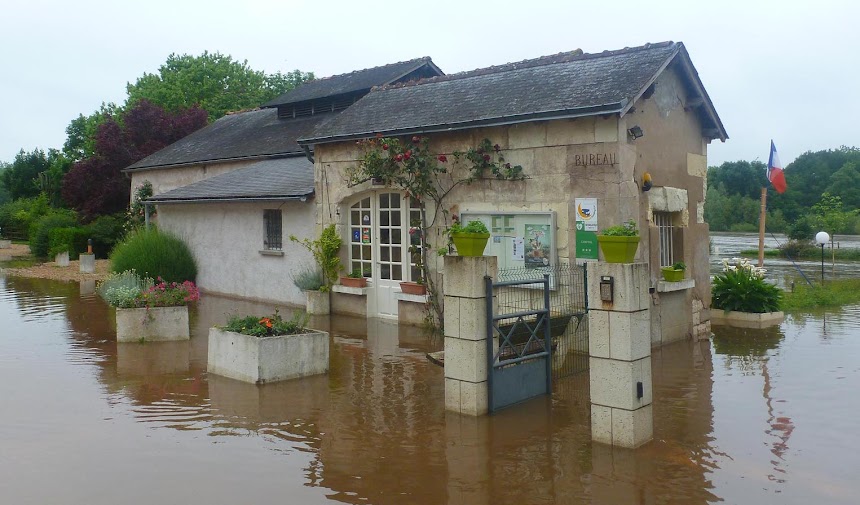 
Today, we are glad to have bought a house on high ground when we came looking in 2003. At the time, we were shown several houses in charming locations down along the river. However, there had been flooding on the Cher a few years earlier, and the sellers warned us of the danger. One woman said at her house, the water had "only" come up to the front door. A man down the street said he'd had a foot or two of water in his basement, where he had set up a guest bedroom suite. 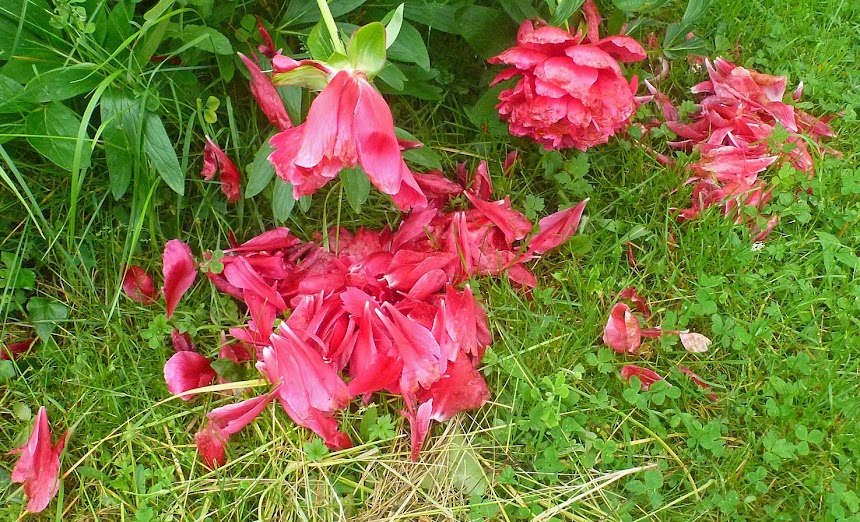 Rains have knocked the petals off our peonies.


The amazing thing to me is that despite all the heavy rains of the last week, our roof hasn't leaked. What a relief. It has leaked several times since 2007 when really heavy rains have fallen. We've had work done several times. The roofer who came by last year said the roof was not designed to cope with such downpours, and that the same was true of many houses in the area. He did good work for us.
Posted by Ken Broadhurst at 07:00