We saw the sun yesterday afternoon, but it didn't last. This morning it's raining again — another gray morning. Walt was able to cut part of the grass yesterday, taking advantage of a dry afternoon. 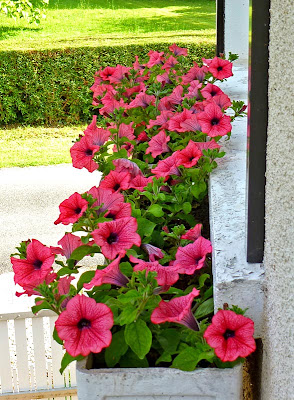 Petunias in planter boxes under the kitchen window
Today, we're going to Tours to do, as I said, some more shopping. Ikea, Paris Store, and more. At least we are taking advantage of our rainy days. The forecast for the the first part of next week is not encouraging.

Coleus plants in window boxes on the north side of the house
Did I mention that I nearly stumbled over a fawn the last time I went out for a morning walk with the dog (Tuesday)? Callie ran right past it. It was hiding in some very tall weeds — maybe it hid there because it heard me and Callie coming. It didn't jump up and run until I was nearly on top of it. I could have reached out and touched it. It took off running, with Callie giving close pursuit. It got away. 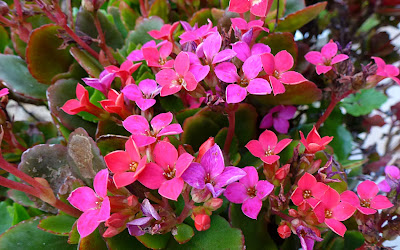 Flowers 0n a potted kalanchoe plant on the terrace
The ground around the vineyard is so wet that it's slippery and dangerous. I've nearly fallen on my fesses several times on recent walks. At the same time, the weeds are very high, so it's hard in places to know what you are about to step on... or into. 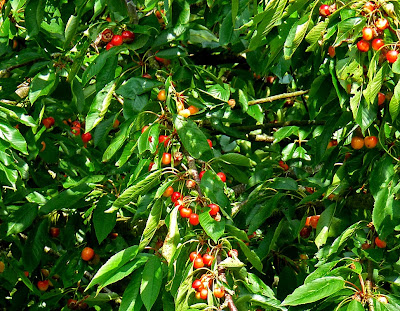 A neighbor's cherry tree is covered in fruit. I hope
somebody comes to pick some of it soon.
I ate cherries from a couple of trees yesterday afternoon, during the walk. There aren't many of them, and some are spoiled because of all the rain, but there are a few tasty ones. The tree with the most cherries I've seen is in the back yard of the house down the road that's supposedly for sale. The yard is fenced in, so I can't get to the cherries. I wonder if the birds won't get them all. Some pictures are in this post to give you an idea... 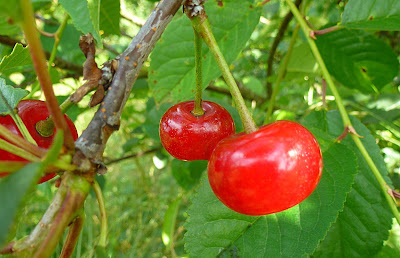 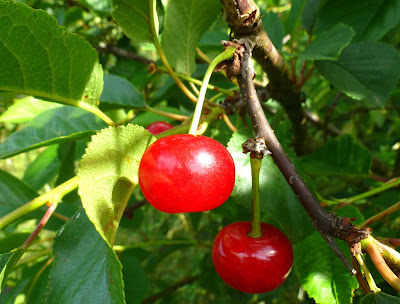 A few cherries on some trees on the edge of the vineyard
Susan in California asked about the monitor. What I ended up getting is a Samsung model, the S24B300H. It didn't cost a fortune. Here it is on www.amazon.fr. My old monitor (I'd had it for two or three years) was an 18" off-brand LCD TV that I bought at SuperU on an impulse, and it cost more then than the new Samsung does now. The S24B300H seems to be a European model; I don't see it on American web sites. Here it is on www.amazon.co.uk. 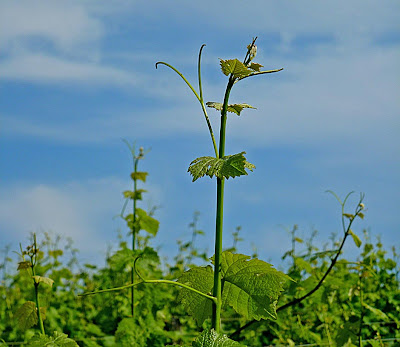 The vines are reaching for the sky now.
Before I bought the Samsung monitor, I tried using a 32" LCD TV as my monitor, but it was just too big for my desk, and the resolution wasn't sufficient at 1360 x 768 pixels. Sitting close to it, I could see the individual pixels. The 24" monitor runs at 1920 x 1080 so it's sharper than the TV screen and it fits better on my desk. It's connected to the computer by an HDMI cable.
Posted by Ken Broadhurst at 07:00