I use the word « gourmets » not because we particularly are, but because the restaurant where we had lunch yesterday is called Le Rendez-vous des Gourmets — "The Gourmets' Meeting Place". It's up in Bracieux, just south of the Château de Chambord and 25 miles north of Saint-Aignan.

We first heard of the Rendez-vous des Gourmets a couple of weeks ago, when we had dinner with some people who live across the river from our village. Leon and Sue from Australia were passing through, and their friends Carol and Mikee had all of us over one evening. The other guests, a French couple named Annick and Gérard, told Walt about their son, a chef who has a restaurant in Bracieux. They gave him the restaurant's card. 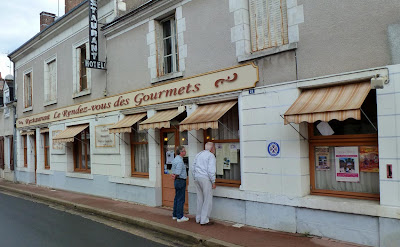 Bracieux is the first town on the road
leading south out of Chambord.
This week, CHM asked us to choose a restaurant where we could
go and have a celebratory lunch. The first one we thought of was
Le Rendez-vous. We had looked it up on the Internet and realized it had replaced another restaurant in Bracieux, in the same building, where we had had a nice lunch 12 years ago. Le Rendez-vous des Gourmets got some very good customer reviews on web sites I scanned through. 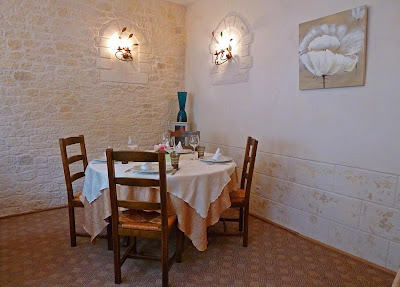 The restaurant's décor is simple but slightly formal.
The place did not disappoint. CHM said we should have the Menu Découverte, which looked especially "gourmet". It includes seven courses, if you count the little hors d'oeuvres called « amuse-gueule » and the mid-meal "cold interlude" of sorbet that is served between the fish and the meat courses. 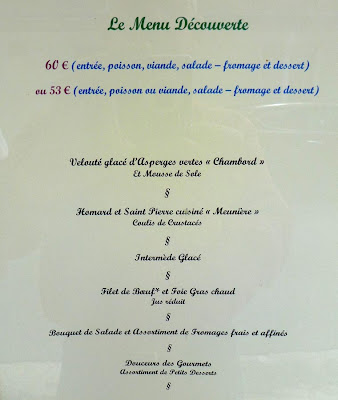 We chose to have what is called « Le Menu Découverte ».
I'm going to make this report on the Rendez-Vous des Gourmets into two posts, because I have a lot of photos. It was a memorable meal, including dishes made with asparagus, lobster, foie gras, beef filet mignon, cheese (of course) and several desserts. We had a bottle of white wine from the area near Blois called Touraine-Mesland — a Chenin Blanc — and a bottle of red — Pinot Noir — from the village of Oisly near Saint-Aignan. 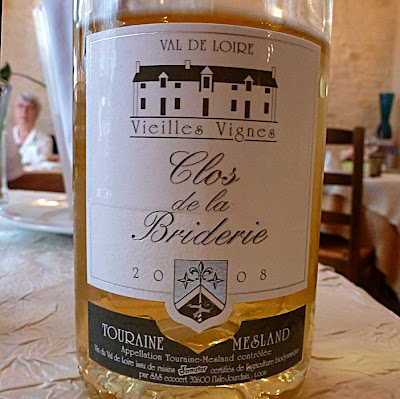 This white Touraine-Mesland was good with the soup
and fish courses that started the meal. 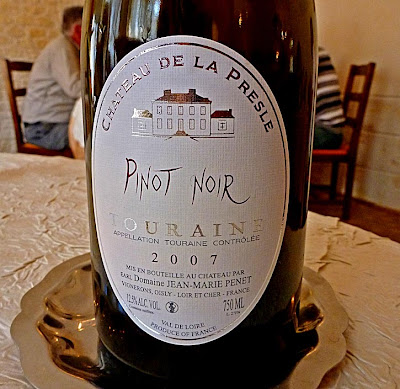 And this red Pinot Noir from Oisly, near Saint-Aignan,
was good with the meat and cheese courses.
More about the food tomorrow...
Posted by Ken Broadhurst at 07:25