The Mange-Grenouille — it's a funny name meaning "Frog-Eater" — is one of the best restaurants in the immediate Saint-Aignan area. We had lunch there last Friday, wrapping up a three-day string of copious away-from-home meals. This week, it's back to our routine of lunches at home and only a very light snack at night.

The Mange-Grenouille's lunchtime menu is very reasonably priced, given the quality of the cuisine. For three courses — starter, main dish, and dessert — you pay only 14 euros, or about $18 U.S. Have just two courses (omitting the starter or the dessert, for example) and you pay less than $15. If you just want a main course (le plat du jour), it's 8.50 euros, or less than $11. 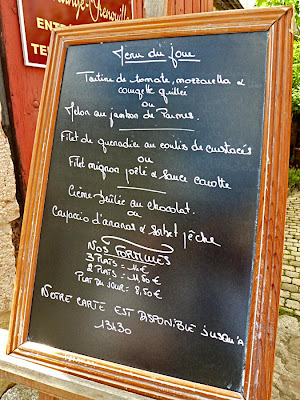 The lunch menu at the Mange-Grenouille
restaurant in Saint-Aignan
Click the picture with your mouse to enlarge it.
At night the prices are higher and the menu is more extensive. You have more choices, including the promised frogs' legs. Either way, the decor is attractive and the service is pleasant and efficient. There's an outdoor seating area in addition to three different rooms inside. Here's an earlier post about the Mange-Grenouille on my blog, and one on Walt's blog too. 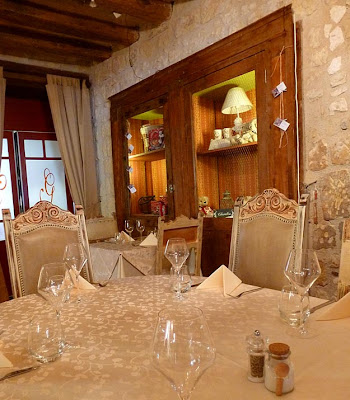 Decor
Our group of eight at the Mange-Grenouille Friday included me and Walt, CHM, blogger friend Martine/Ladybird from Belgium, her friends and fellow travelers Mats and Vera from Sweden, and her French friends Brigitte and Jean-François who live near Chenonceaux. It was a bilingual lunch, with Martine and me occupying the center seats at the table to bridge the language gap. 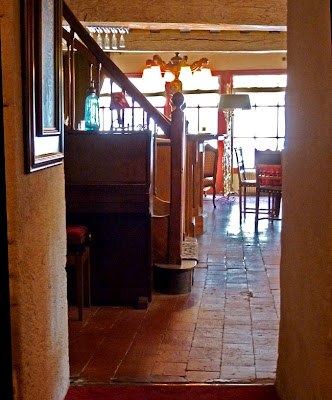 Old-time ambiance
Anyway, it was fun, but we got off to a late start and much of the daily menu had changed by the time we placed our orders. The appetizer courses were the same, but the main dishes had changed from filet mignon (pork tenderloin) to andouillette (pork chitterling sausage, a French specialty) and from grenadier (a deep-sea fish known by the unfortunate name of "rattail" in English) to daurade (a European fish called the "sea bream"). All but one of us ordered the daurade, and it was delicious though the one filet each us us got served was very small. 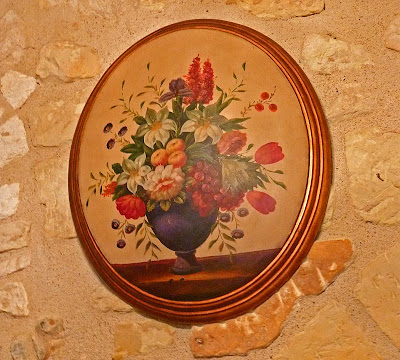 I didn't take pictures of the food or the people, because
we were too busy talking and getting to know each other.
One of the desserts had changed as well. Instead of chocolate crème brûlée, we were offered an apricot tart, which several of us chose. It was delicious. The other dessert choice was the pineapple carpaccio listed on the menu, if my memory is accurate. That would be very thin slices of fresh pineapple arranged on a plate and dressed with a sweet syrup. 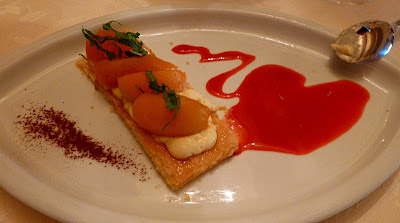 Apricot tart for dessert
The Mange-Grenouille is located on the main street into old Saint-Aignan, close to the bridge. The space used to be a big old café, Le Café Rouge, I've been told (but don't quote me). When we arrived here in 2003, it had already gone out of business. The Mange-Grenouille restaurant opened in about 2005, and it has been successful.
Posted by Ken Broadhurst at 07:30