Lasagne or lasagna? In other words, singular or plural? In Italian, lasagne is the plural of lasagna. You use more than one lasagna noodle when you make lasagne. Language, eh? In French, you often see the Italian plurals re-pluralized, with recipes for lasagnes, for example, or a plate of spaghettis with tomato sauce and meatballs.

Anyway, I've been favoring the Italian lasagne, plural, in English, but when I search on the terms in Google, also in English, I get 5 million results for lasagna and only 3.5 million for lasagne. In other words, it's almost a toss-up. Let's move on. 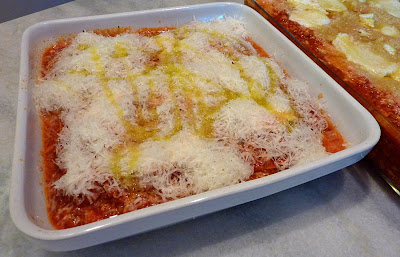 Lasagne made with Petit Trôo and Pecorino Romano cheeses

When CHM was here week before last, he bought a little cheese called Le Petit Trôo at the supermarket just a day or two before he went back to Paris. Since we enjoyed a string of restaurant meals over those days, we never even cut into the Petit Trôo cheese, and CHM left it for us. 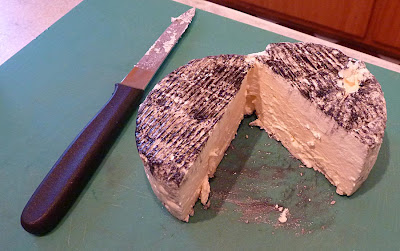 Trôo is a village on the Loir River. I do mean the Loir River, not the Loire. La Loire (f.) is our region's biggest river, and Le Loir (m.) runs parallel to it a few miles north for several dozens of miles, flowing toward the west. The biggest town on the Loir is Vendôme, and another biggish town is Montoire-sur-le-Loir, about 30 miles / 50 km north of Amboise and 50 miles / 80 km northwest of Saint-Aignan. 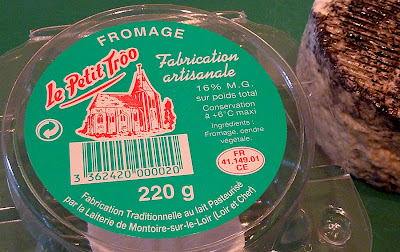 I think when the label doesn't specify otherwise, it's wise to assume
a cheese is made with cow's milk rather than goat's or ewe's milk,
despite all appearances to the contrary.

And Trôo? It's a small village (pop. 350 or so) just west, downriver, from Montoire. It's a village troglodytique — that means that it is made up partly of very old cave dwellings dug into the side of a promontory along the north bank of the Loir River. And by the way, the name is pronounced [TROH], not [TROO], which would be the French word trou, or "hole" — the word trou is used to describe a remote, nondescript or even ugly town or village, the way we would say a place is "a dump", derisively. You might see the name written as Troo, Trôo, or even Troô, and it is not a dump. Here's a 2008 post I did about it, with a few pictures.

All that said, the cheese called Le Petit Trôo isn't even made in Trôo itself, but in a dairy in the bigger town of Montoire, which I mentioned earlier. And it fooled me when we bought it. Because this whole area is known for its goat cheeses, and because the Petit Trôo is a little round ball of a cheese, a thick disk really, and it is sold either "naked" or coated in black ash the way many local goat cheeses are sold — Selles-sur-Cher cheeses, for example, and also Valençay, both local. 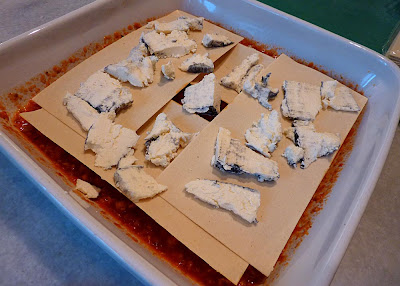 I decided to make lasagne last week, and I made a big batch of meat sauce using ground turkey breast and finely chopped mushrooms, with tomato sauce, onions, garlic, and herbs. I made a lot of sauce, so I had enough for two pans of lasagne. In the bigger one, I used ricotta and mozzarella, which I got at the supermarket, and I put some grated Italian cheese (not really Parmesan, but the same idea — grated hard cheese made from cow's milk) on top.

For the second pan of lasagne, I decided to use the Petit Trôo, thinking lasagne made with goat cheese would be good and interesting. I also had some Pecorino Romano cheese, which is made with ewe's milk in Italy, that I could grate over the top of the pan of lasagne instead of Parmesan — making the lasagne that much more unusual and exotic, I figured. 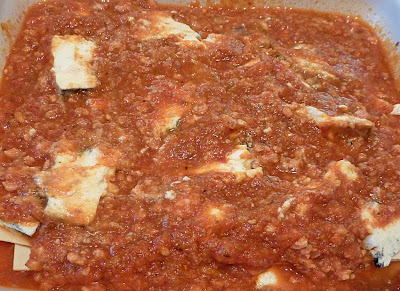 So I made the lasagne and then when I started to blog about it last week, I looked up Le Petit Trôo in French Wikipedia. Imagine my surprise when I read that Le Petit Trôo is a cow's milk cheese. I think it's disguised as a goat cheese. What it really is, however, is a little round of cream cheese, but slightly grainy and not so smooth as Philadelphia-style cream cheese (did you know that the Philadelphia in that appellation is a village in Upstate New York and not the city in Pennsylvania?). 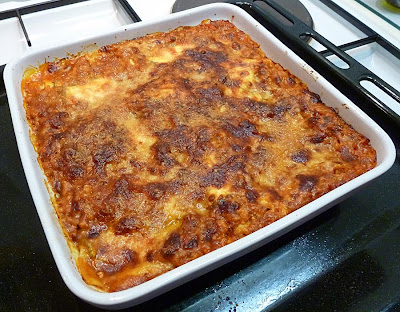 The salty black wood ash that the little cheeses are coated with gives it flavor. Petit Trôo cheeses are also sold plain or coated with garlic and herbs or black pepper, according to what I see on the Laiterie de Montoire's web site. The Petit Trôo is made with pasteurized cow's milk and the dairy or laiterie was a co-op that was originally located in Trôo itself but moved into a newer facility in Montoire in the mid-1970s.

So what do I think of the lasagne? I don't know, because I haven't tasted it yet. The other pan was pretty good. The Petit Trôo-Romano cheese lasagne went into the freezer. We'll get around to thawing and eating it one day soon.
Posted by Ken Broadhurst at 08:15