The weather doesn't change. It's just more of the same every day. Here we are, almost at the summer solstice, and there's not a hint of summery weather in sight. It's getting old. We had a nice afternoon on Sunday, but it's been raining, or threatening to rain, ever since. It rained steadily in big splashy drops last night before I went to bed.

Some days we get something done in the garden; some days not. Yesterday morning, Walt did some weeding and planting, but with the wet weather we know that the weeds will grow back really fast, and the slugs will probably eat any new shoots that push up out of the ground. Yesterday we also finally burned some debris that had collected on a garden plot a while back, with the hope that the weather will clear up and we'll be able to plant some squash and maybe some greens soon. 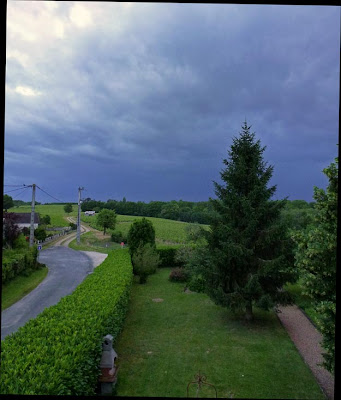 A typical afternoon at Saint-Aignan this June 2012
I've been buying a lot of hardware recently. That's a bad sign. When times get tough, the tough go... shopping. Thanks to Amazon.com and Amazon.fr, I have a new camera, a new DVD player, a new friteuse (deep-fat fryer for making frites), and now a new monitor for my computer. Buying new hardware is something I've always done when life gets me down. I guess it's a little bit of nest-feathering. 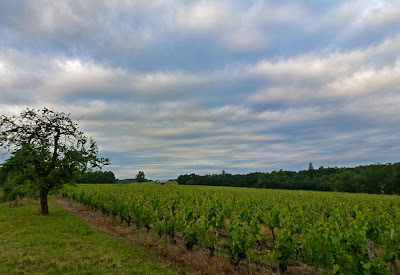 The vineyard on what passes for a nice June morning
I can justify each of these purchases. The new camera is great — it's much faster and has a longer zoom than the old one. The new DVD player will read both American and European DVDs. The fryer will make better French fries quicker, and it will be easier to clean than the old one was. And the new monitor... well, I just got it yesterday so we'll see. 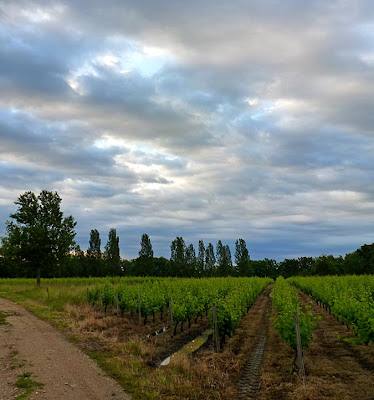 One day there was almost a little bit of blue sky...
One thing I noticed immediately when I set up the new monitor is that my pictures now look a lot smaller. On the old, smaller monitor, they pretty much filled the screen at a resolution of 1440 x 900 pixels. Now with the new monitor at 1920 x 1080 pixels, my pictures sort of float in the middle of the gray Blogger screen, looking shrunken and lonely. Should I resist the urge to "super-size" them, and just get used to it? 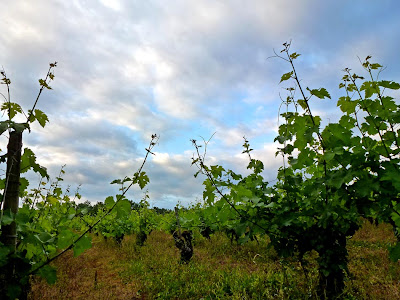 ...but not much. The vines are growing though, thanks to the rain.
Tell me if you think my photos are too large or too small. That'll give me a clue as to what to do now. With this weather, I'm not taking very many pictures anyway. Just these I'm posting here, which are nearly a week old. But nothing has changed in a week. According to weather reports, nothing is likely to change much very soon. 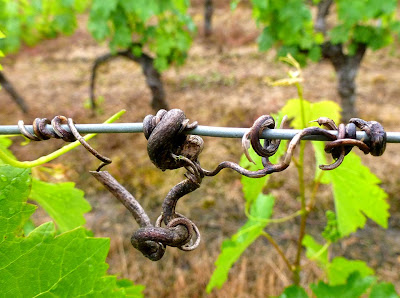 Remains of last year's vines
Oh well. 2012 is turning out to be a strange year. Can you believe our trees have produced no apples? Nor have the neighbors'. In past years, we've been buried under piles of apples. We've struggled to gather them up and dispose of them. We've made pies and jellies and apple sauce. Not this year. The trees are bare.

The good news is that the drought is definitely over.
Posted by Ken Broadhurst at 06:30