One positive thing about the rainy weather we've been having since the beginning of April is that the lettuces Walt planted in the garden have been and still are fantastic. They're full, leafy, and green. They've grown so vigorously that not even all the moisture-loving slugs and snails out there can keep them down. 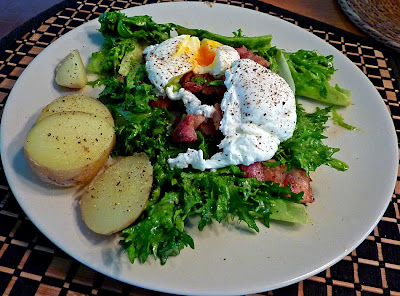 Salade Lyonnaise the way we had it for lunch last week
The two varieties of lettuce Walt grew this spring are Laitue Romaine Blonde Maraîchère** and Chicorée Frisée Grosse (which is sometimes called "curly endive" in the U.S.). One head of either has been giving us two or three big tossed salads. With the Romaine, we've been making Caesar Salads with grilled chicken breasts, and today we're going to enjoy a Caesar Salad with hot-smoked salmon fillets that we made over the weekend with the help of our friend John, who has a smoker. 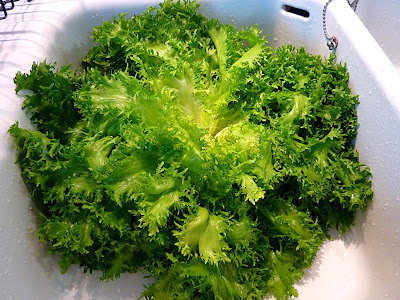 One Chicorée Frisée « Grosse » from the garden
filled up one side of our kitchen sink.
With the Chicorée Frisée, there are a lot of ways to make tasty salads. Frisée needs to be dressed with a mustardy, vinegary dressing flavored with garlic, onion, or shallot. Roasted red beets are a good accompaniment because their sweetness tones down the bitterness of the salad greens. Toasted walnuts or pecans do the same, and that kind of nutty salad is good with some chunks of Roquefort or blue cheese added in with the greens. 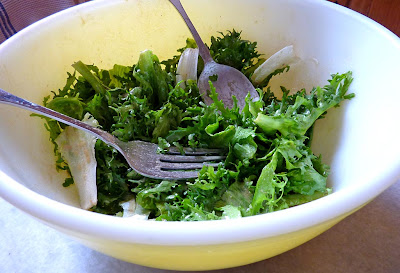 It's a good idea to dress and toss a Frisée salad in vinaigrette
15 or 20 minutes before you plan to serve it.
That wilts and tenderizes the greens.
Salade Lyonnaise is another standard French recipe that features Chicorée Frisée. You might see it called Frisée aux Lardons in cafés or restaurants in Paris or elsewhere in France. At least one recipe I found on the web (at Marmiton) calls for making the Lyon-style salad with dandelion greens, but these days it's more common to see it made with Frisée. Either way, it's a kind of bacon, eggs, and toast salad. 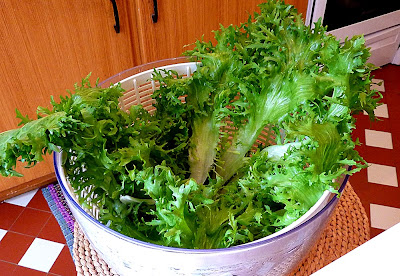 The Frisée washed and spun dry
The Lyon-style salad includes a couple of ingredients that also bring out the best flavors of bitter Frisée greens — smoked pork lardons (chunks of cooked bacon or ham) and freshly made croutons (cubes of toasted or fried bread, with garlic if you want). The dressing is the same kind of garlicky or oniony vinaigrette, heavy on the Dijon mustard. Finally, and literally to top it off, a lunch-size portion of Salade Lyonnaise will feature a couple of poached (or fried, or soft-boiled) eggs. 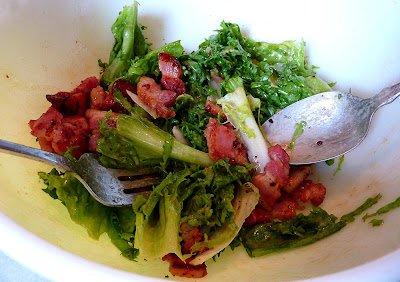 After the salad has "cooked" in vinaigrette, add the
pre-cooked bacon or ham and toss again. Do the
same with croutons if you use them.
That was our lunch a few days ago, though we didn't make croutons because we had a freshly baked and delivered baguette to eat with the salad, which was our main course. Instead, I boiled a couple of new potatoes and served them, sliced, on the side. The salad with eggs, lardons, and potatoes, plus some cheese afterward — and dessert — made a satisfying meal.

Here's a link to a good step-by-step recipe for Salade Lyonnaise, in French.

** The French word maraîcher (fem. maraîchère), describing a garden, translates into British English as "market garden(er)" but into American English as "truck farm(er)". I looked up "truck farmer" and was surprised to see that the "truck" in the expression comes not from the U.S. name of the vehicle that the farmer uses to take his produce to market, but from the French word « troc », meaning "barter" or "trade". The farmer barters or trades with his produce at the market.
Posted by Ken Broadhurst at 07:15