Making your own heat

Making French fries at home is nearly a requirement when you don't go out to restaurants very often. We were in the U.S. in May, and we ate in restaurants nearly every day. And most of the meals included French fries, unless we had a big salad for lunch. That's too many fries, of course, but you just have to have good fries a couple of times a month. 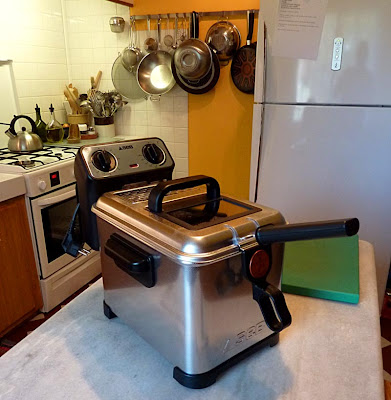 The stainless steel SEB FR404800 deep fat fryer
French fries, or frites (pommes frites, or pommes de terre frites) appear on menus nearly as often in France as in the U.S., of course. You might think they were invented in France, but according to most experts French fries are actually Belgian in origin. 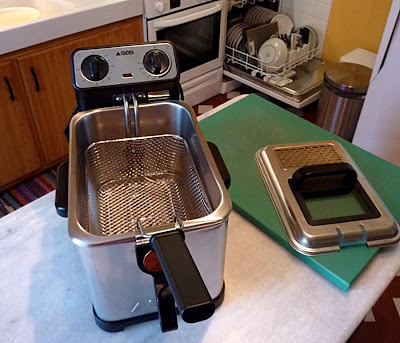 The lid, with its built-in permanent filter, is dishwasher-safe...
I bought a new fryer recently. We already had one, a Kenwood model, but it was (and is) very hard to clean. It cooks potatoes just fine, but that's not enough. When I ordered it online from Darty years ago, it was advertised as having a bowl that could be removed for cleaning, but that was not true. Caveat emptor. I should have returned it, but it was too much trouble. 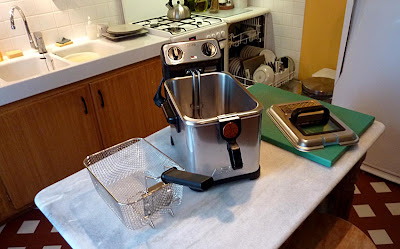 ...as is the stainless fry basket.
The new fryer, a SEB model, comes completely apart, and all the pieces except the electric heating element/control panel can go through the dishwasher. It's all stainless steel — the old Kenwood fryer has a fixed aluminum bowl inside a plastic housing. 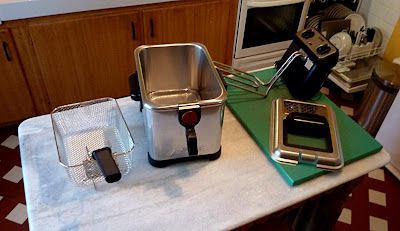 The heating element / control panel is removable too.
For many years, the most popular meal served in French restaurants was steak with French fries — the famous steak-frites. It probably still is, though the proliferation of fast-food restaurants has made the hamburger with fries a big competitor. Omelets, too, are often served with fries. Fish and chips — fried fish filets with French-fried potatoes — is common in Great Britain and most of the U.S., but you hardly ever see that combination in France. 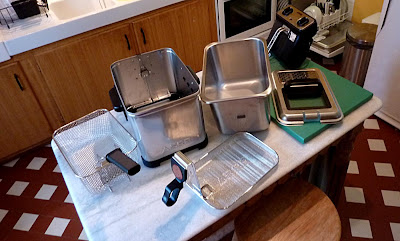 The SEB fryer in all its disassembled glory
I won't use the new fryer to cook anything besides potatoes. I'll use frozen frites much of the time, but I'll start a new round of experiments with making fries using different varieties of fresh potatoes. I have chef Joël Rebuchon's book of recipes for cooking potatoes every way you can imagine (Le Meilleur et le plus simple de la pomme de terre), and I'll be working my way through that one again.
Posted by Ken Broadhurst at 07:35