In the past, many French towns and villages had their own brick-makers, or briquetiers. I guess the advantage of having a local briqueterie was that heavy loads of briques didn't have to be transported over long distances to building sites. 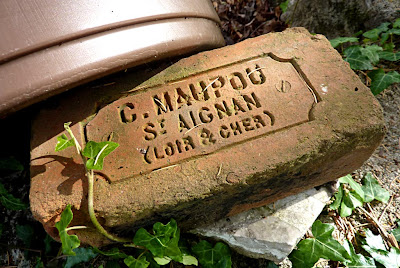 A "red" brick made in Saint-Aignan years ago
This Saint-Aignan brick is one of several that we found in our yard, garage, and garden shed when we moved here nine years ago. It doesn't look very red, but it is surely what we'd call a "red brick" if we saw a house built of such material. I can't find any reference to the G. Maupou company on the Internet. 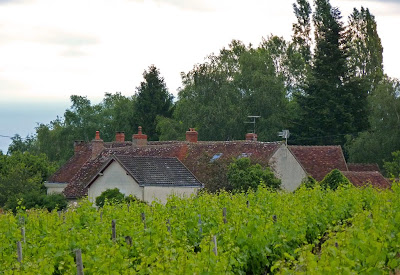 Houses at La Renaudière outside Saint-Aignan-sur-Cher
Red tile rooftops like the ones above —these are our neighbors' houses — are very common in the Loire Valley. The roof tiles are made of the same material — clay — as bricks. They last indefinitely (if not forever). When the roof needs to be rebuilt, the tiles are carefully taken down and stacked for re-use. The wooden slats underneath are replaced, the terra cotta (terre cuite, or "cooked earth") tiles are carefully brushed and scrubbed, and then they're put back up on the roof. 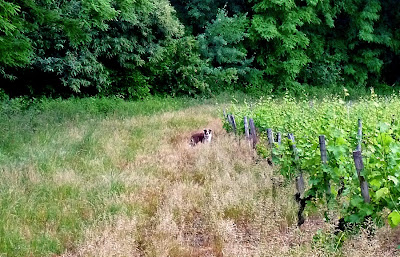 Callie out on the edge of the vineyard
Did you know that Callie is a "red" dog? I know that when we decided we wanted a border collie five years ago, I imagined that we would get a black and white dog. In fact, border collies — the breed has existed for only about 125 years — can have coats with black, brown ("red"), yellow, white, or mottled colors. 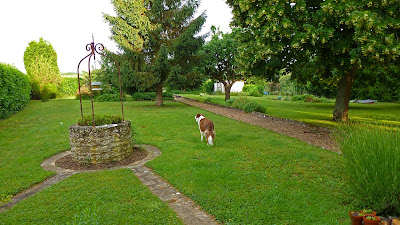 A red dog in a green yard
Some are tri-colored. It seems funny in French to call a dog's coat color rouge or "red" because there's a different word for that in French — roux or rousse. "Red hair" in American English is not called rouge in French, but roux. In fact, roux is "rust red" or "brick red" — in England, they use the term "ginger" for the same kind of color. According to the dictionary, a "ginger tom" is a chat roux — I'm not sure what we say in American English. "Tabby"? "Orange"? Maybe either or both. 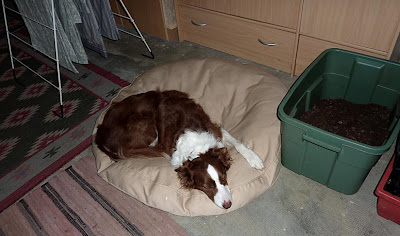 Callie sleeping on a dog bed that my mother made
years ago for our previous dog, Collette
Anyway, I've seen dogs like Callie called « rouge/chocolat » on different breeders' web pages. Chocolat makes more sense — we say "chocolate lab" for a brown-colored Labrador dog. Callie's brown fur really is chocolate-colored. But she's a red border collie, according to sites like the ones on this Google search results page. And here's a page in French for border collie rouge.
Posted by Ken Broadhurst at 07:15