A couple of weeks ago I got it into my head that I wanted to make chicken cacciatore. The French equivalent of that Italian-American dish is called poulet chasseur, which means something like « poulet cuit à la façon du chasseur » — "chicken the way a hunter would cook it." The French word for "to hunt" is « chasser ».

The main ingredient, besides chicken, is mushrooms, it turns out — not tomatoes. Where do you find mushrooms? In the forest, and often French dishes like omelets or pâtés that have mushrooms in them are named « forestière ». It all makes sense, because hunters hunt in forests. 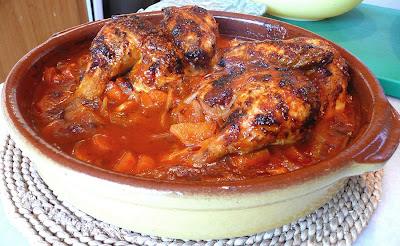 Chicken cacciatore, or poulet chasseur, American-style,
as it came out of the oven
Even in Marcella Hazan's The Classic Italian Cook Book, she give a recipe for a chicken dish that resembles French poulet chasseur more than my memory of cacciatore. She calls it a fricassee of chicken with wild mushrooms, not chicken cacciatore. She puts a little bit of tomato in the sauce, but not much — just as most of the French recipes specify. 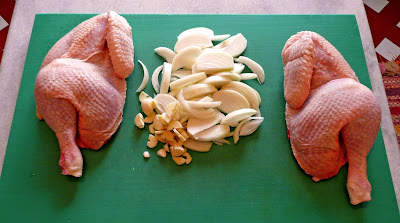 One way to do it is to cut the chicken in half...
The French versions and Marcella Hazan's call for adding two to three tablespoons of tomato sauce or paste (concentré in French) to a cooking sauce that's basically a white wine sauce made with a flour roux and mushrooms. It's just enough tomato to improve the sauce's color, really. 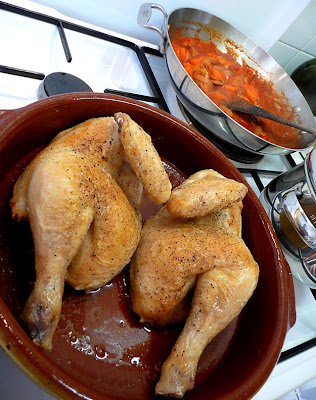 ...and brown the two halves in the oven
while you make the sauce.
One French cookbook I have, Ginette Mathiot's classic of home cooking called Je Sais Cuisiner, gives a recipe for poulet chasseur with mushrooms but no tomato at all. Mathiot cooks a whole chicken, but a lot of the French recipes I see on the web call for just thighs or leg-thigh sections.

I just looked at the Joy of Cooking (1997 ed.) and saw this in the introduction to the chicken cacciatore recipe: "Italian hunters who cook always seem to have tomatoes and olives handy." It goes on to say the "basic ingredients" of the dish are "chicken... tomatoes, onions, and sometimes mushrooms." The recipe calls for a whole small can of tomatoes. 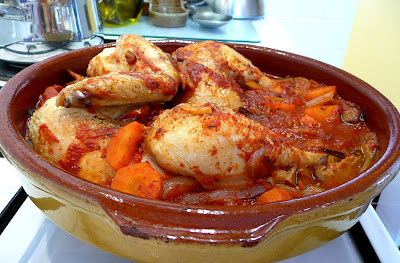 Pour the sauce over the partially cooked chicken halves
and cook it for an hour, covered.
That's what I remember about American versions of chicken cacciatore — a lot of tomato sauce. And that's what I wanted: a chicken cacciatore that corresponded to my memories from childhood and the rest of my life in America. So I made it that way, using a pint of tomato sauce from the freezer and from our garden tomatoes last summer. Since I didn't have any fresh bell peppers, I added in half a cup of red pepper puree, also from the freezer and last year's vegetable garden. 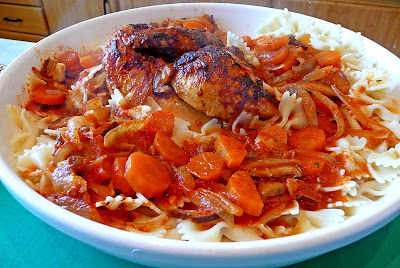 Serve with pasta
Along with mushrooms and white wine, of course. Onions, garlic, carrots, thyme, and olive oil, but no olives. I used dried shitake mushrooms, which I rehydrated in hot water, and I added the mushroom water to the tomato sauce as well. The chicken was a Label Rouge poulet fermier — a farm-raised, free-range bird, that I got at the supermarket. I thought the whole thing was delicious and satisfying. The leftovers were good too.
Posted by Ken Broadhurst at 08:00