Yesterday afternoon March finally arrived. I mean the real thing, not that sunny and warm little June-like interlude we had last week. March means giboulées, which are sudden hard downpours of cold rain and even ice pellets. The showers are supposed to continue this morning. March showers will bring April flowers...

Early morning was beautiful for the daily walk. Rain started later.
This is a view out over the river valley, looking north.
Today is the day when the French Constitutional Council in Paris announces the names of the candidates who have qualified for the April presidential election. On Friday, at least 10 candidates claimed to have gathered the required 500 signatures (meaning endorsements or sponsorships) from elected officials around the country.

The rules are more complicated that the « 500 signatures » shortcut might imply. The mayors and other officials who have issued a given candidates endorsements much represent at least 30 French départements (the equivlent of our counties). That eliminates potential candidates who have a really strong local following but no national credentials. And no more than 50 of a candidate's signatures can come from any one department, so fairly widespread support is ensured. 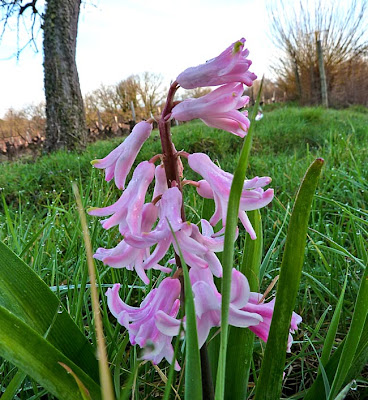 Hyacinths that escaped from somebody's garden
All that means the the Constitutional Council staff has to validate each candidate's petition very carefully and thoroughly, authenticating the signatures and the geographical distribution. And yes, for 10 candidates. Some of the "minor" candidates had no trouble getting the signatures they needed, and some of the candidates considered more prominent and popular failed. For example, the ex-Prime Minister Dominique de Villepin had to call it a day, while a couple of candidates I'd never even heard of will qualify for the ballot. 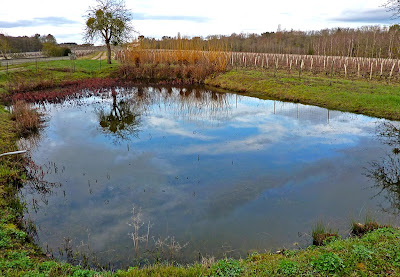 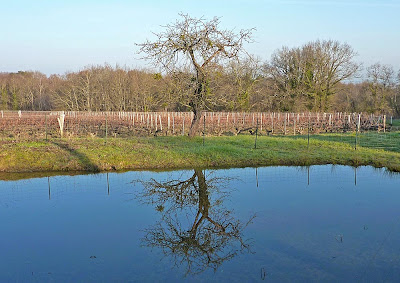 The pond out back was pretty yesterday and all last week
Starting tomorrow, the campaign rules change. Every qualified candidate will get equal time on television, for example. I'm not sure how that works with regulating news coverage to ensure equal time for the candidates, but we'll see. Election day is six weeks away, and there will almost surely be a run-off election on May 6 between the top two vote-getters — unless some candidate gets more than 50% of the vote in the first round of balloting, which is unlikely. 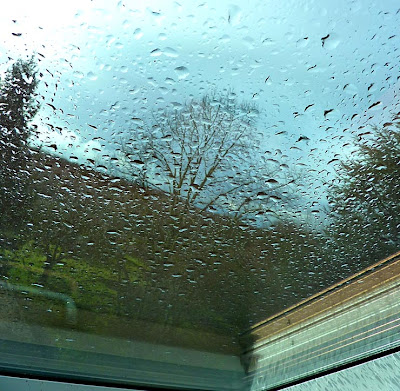 Yesterday afternoon
The election is our entertainment right now, along with cooking and eating, since the weather is not conducive to work in the garden. Bertie the black cat is in here this morning, rubbing all over me and the furniture, because he can't get out an hunt rodents and birds — he doesn't like getting wet. He must have liked the sunny warm weather, because we didn't see him much last week, except at feeding time.

Walt was the lucky one who got to walk with Callie in the rain both yesterday afternoon and this morning. As you can see in the pictures here, I had a beautiful stroll yesterday morning. The dog an I went out into the woods up at the top of the vineyard, and that's an area Callie isn't familiar with. She found it very exciting, sniffing all around for traces of deer and rabbit aromas.
Posted by Ken Broadhurst at 07:30