The other day we had pot au feu for lunch. That's boiled beef, and you end up with meat and vegetables but also a lot of broth you can make soup with.

The soup I decided to make was Vietnamese pho bo — spicy beef soup with noodles. I had four liters of good beef broth. To it I added a couple pieces of star anise, a cinnamon stick, three dried cayenne peppers, a three-inch chunk of ginger root, and a sliced onion. I let that cook for about two hours on low heat. 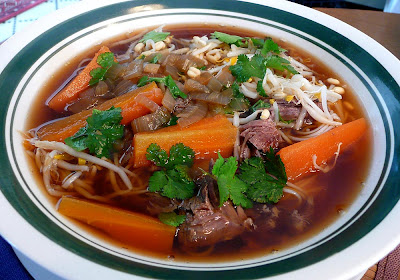 A Frenchified version of pho bo (Vietnamese beef noodle soup)
I also added a tablespoon of soy sauce, a tablespoon of dark sweet soy sauce, half a cup of Mirin rice wine (sherry or dry white wine would be good) and two tablespoons of nyoc mam (Vietnamese or Thai fish sauce) during the cooking. While the broth was simmering, I cooked some Asian wheat noodles (almost any noodles, including spaghetti, would be fine) and shredded up the leftover boiled beef. I also cut the leftover carrots into smaller pieces that we could eat with chopsticks. 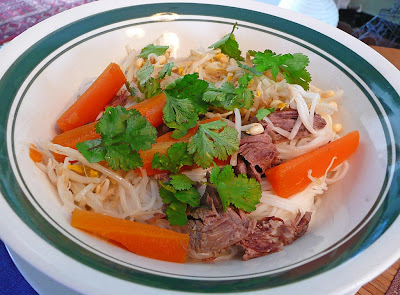 Make up a bowl and ladle piping hot broth over it.
There you have it. Put the noodles, some bean sprouts, and the beef and carrots in a bowl. If you have some cilantro (coriander) leaves, tant mieux. Pour hot broth over all. Eat it with chopsticks and a soup spoon. Drizzle some sesame oil over the top and add more soy sauce to taste.
Posted by Ken Broadhurst at 08:00