My new French driver's license arrive yesterday. Literally — it arrived by car from the mairie (village hall), delivered by the mayor herself. Madame le maire lives almost next door, so she dropped off the new license on her way home for lunch.

I had requested a new license because the one I had dated from 1981 and had a picture of me on it that was fairly unrecognizable. It also gave my address as a street in Paris where I lived in the late 1970s and early '80s. I wanted a license with a current photo and my current address on it. French driver's licenses are good for life and never have to be renewed, by the way. 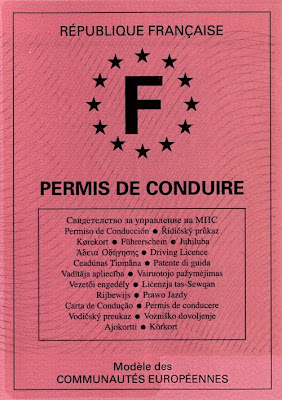 The new French driver's license is labeled as such in
many languages, including (British) English.
When I took the old license, the completed form, and new photos to the mairie three weeks ago, the clerk told me she thought the only valid reasons for requesting a new, updated driver's license were loss of the original or damage to it — accidentally running it through the washing machine, for example. My old license was in pristine condition. "They'll probably refuse your request," the clerk said.

Never mind that on the official form that a different clerk at the mairie had given me a few weeks earlier, there were three checkboxes under the category Reasons for Requesting a Replacement License: (1) lost original, (2) damaged original, and (3) change of name or address. The clerk went ahead and sent in the form, just shrugging her shoulders when I insisted and persisted.

So now I have it. In France, it doesn't matter, but in the U.S. I'll feel better having a license with a picture that looks like me (even if it also looks like a mug shot) and that carries my current address. The next time we go, I'll be renting a car. Walt and I both have French "driving licences" and neither of us has an unexpired U.S. license any more.

I've erased a lot of the personal information on my new license,
but you can see what a French permis de conduire looks like.
The news yesterday, coincidentally, reported that 25% fewer people died in traffic accidents in February 2012 compared to February 2011. I'm sure that's because of the two week spell of snowy, frigid weather we had starting February 1. It discouraged people from driving, and encouraged drivers not to speed.

Along with that good news about highway fatalities, the news also reports that fully three-quarters of the people killed in car accidents are men, and that 90% of the penalty points given to drivers for rules infractions go to men. Women, it turns out, are much more careful drivers than men — despite, the news reader on TéléMatin said a moment ago, all the old stereotypes. Too many men on the roads of France are daredevils.
Posted by Ken Broadhurst at 07:15