That's the French translation for "a hotdog" but nobody here would ever say that except facetiously. Actually, in French this kind of sandwich is called a « hot-dog », with a hyphen. Pronounced, it sounds a little like [ut-DUG].

We made U.S.-style hot dogs, with mustard, ketchup, and pickle relish, last week. So the next time we went to the supermarket, I bought some more saucisses de Francfort. Actually, they were saucisses de Strasbourg, which are similar to the German ones. In this season of equal time — I refer to the French presidential election — I thought we needed to make hot dogs French-style. 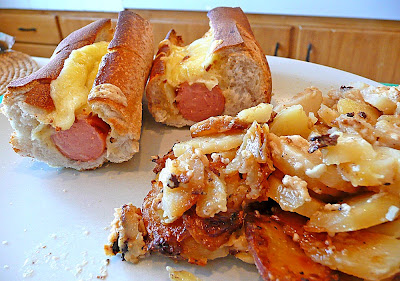 A French-style hot-dog, served with a gratin
of sliced potatoes and Jerusalem artichokes
One of my earliest memories of a hotdog in France dates back to 1970, when I was a student in Aix-en-Provence for a semester. There was a street vendor there who sold sausage sandwiches. His version was a hot saucisse de Strasbourg (a wiener) inserted into the middle of a hollowed-out piece of French baguette of the right length. The only condiment? Not mustard. Not ketchup. Not pickle or chile. No, just butter, melted. It was amazingly good. 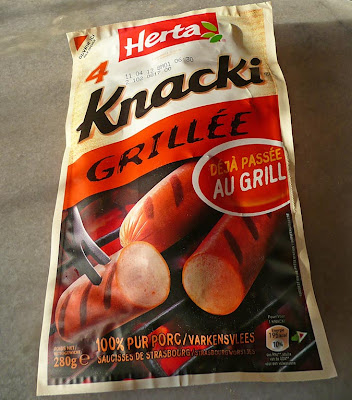 Knacks are saucisses de Strasbourg — "knackwurst"
or even "knockwurst" in English.
Anyway, that's not what I recognize as a real French hot-dog. The authentic one, to me, is a saucisse on a split length of baguette dressed with Dijon mustard and melted Gruyère cheese. You put the wiener in the bread, slather it with hot mustard, and sprinkle on a good amount of grated "Swiss" cheese (Gruyère, Comté, or Emmenthal). 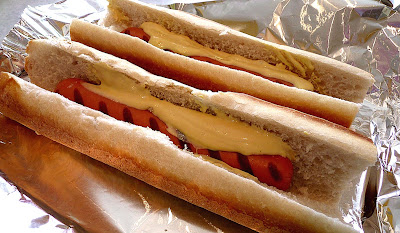 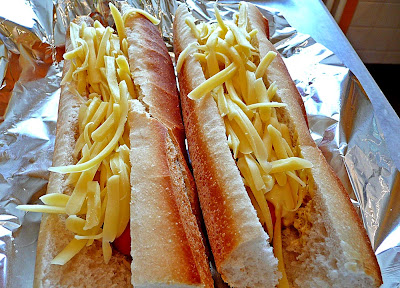 Baguette, saucisses, mustard, and grated cheese
Then you run the sandwich under the broiler until the cheese is completely melted and starting to brown on top. Be careful not to burn the baguette. Eat it with your hands or, better, with a knife and fork, after it's cooled slightly. 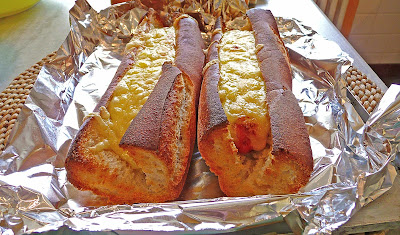 Hotdogs hot out of the oven
Some recipes I've seen call for wrapping the wiener in a slice of poitrine fumée — streaky U.S.-style bacon — but that seems to me to be a little over the top. I was tempted, though.
Posted by Ken Broadhurst at 09:15