So the hunting dogs that you see at the Château de Cheverny are considered now to be a distinct breed. The breed's name is Grand anglo-français tricolore, or Great Anglo-French Tricolo(u)r Hound. 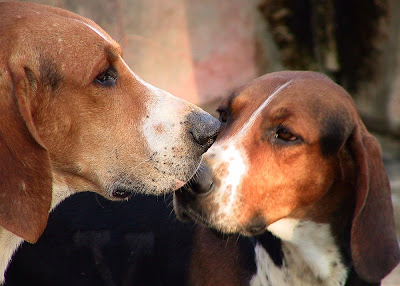 The dogs at Cheverny
This breed was created by crossing French hunting dogs — specifically, a breed called the Poitevin — with English Fox Hounds. The Anglo-French Hounds are more French than English, with the original French breeds predominating, according to the sites I've read. Here's an interesting French site on which you can search for the breed you want information on. 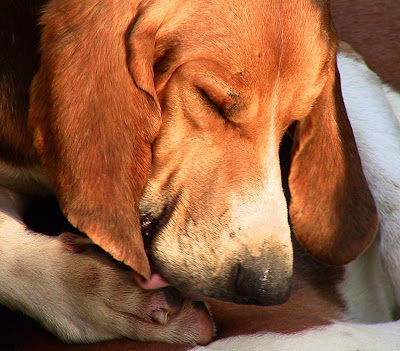 Loveable, I think
These are dogs that weigh from 30 to 35 kilograms — 65 to 85 lbs. — and need a lot of exercise. They're docile and affectionate, apparently, even with children, but they're dogs that need to run and so do better in the country than in urban environments. The Anglo-French Hound is definitely not a lapdog.
Posted by Ken Broadhurst at 07:48