Arriving in France with Collette

It was early June in 2003. Walt and I had sold our house in San Francisco in March. We'd had all our belongings — at least the things we wanted to keep — packed into a container for shipping, and then we'd flown off to France with the dog.

The dog’s name was Collette — we called her that because she was a collie of some sort. We had found at the Humane Society animal shelter in Santa Clara, California, in 1992 and adopted her. She had to travel in the cargo hold of the Air France plane, and that made us nervous. 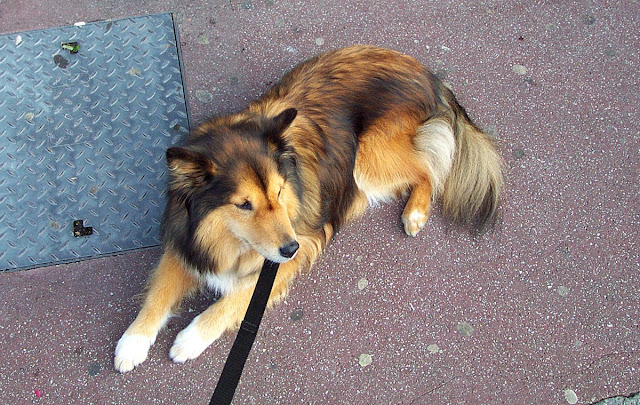 Collette on the sidewalk in Rouen in June 2003

Nobody seemed to know what we had to do to export a dog from the U.S. to France. I had spent nearly six months talking on the phone to people all over the U.S. and even in France who were experienced in exporting dogs and were supposed to know what kinds of shots, blood tests, microchips, and documents needed to be taken care of.

Leaving the dog behind wasn’t an option. If she couldn’t make the move with us, we weren’t going to be able to move.

June 2003 at Etretat on the English Channel

Somehow we had figured out a procedure that made sense and followed it, even though the processes and requirements were not at all clearly spelled out. France had recently been declared rabies-free, so we had to be careful to have all the right shots and blood tests. Everything seemed to be in flux. 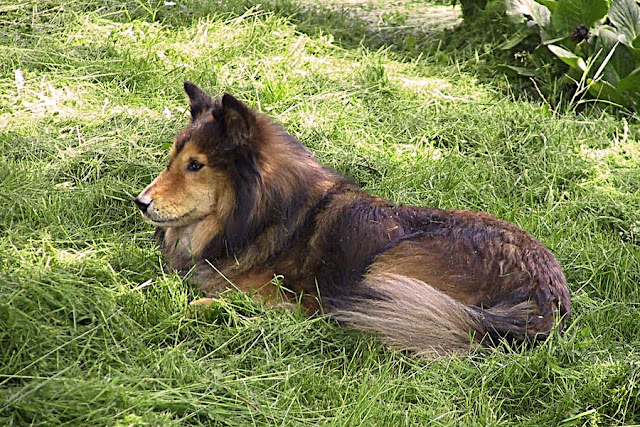 But one dog-export expert said the French customs authorities would be within their rights to deport a dog that arrived at Roissy without the proper paperwork. Who would be there in the U.S. to pick Collette up if they sent her back? That same expert also said French authorities could also decide to euthanize an animal that arrived in France illegally. So it seemed like a good idea to do things right.

When we arrived at Washington Dulles airport for our one-way flight, the people at the Air France check-in counter were mystified too. “You are traveling with a dog?” they asked. Yes, I said, we have paid for the dog’s passage. She’s here in her kennel. 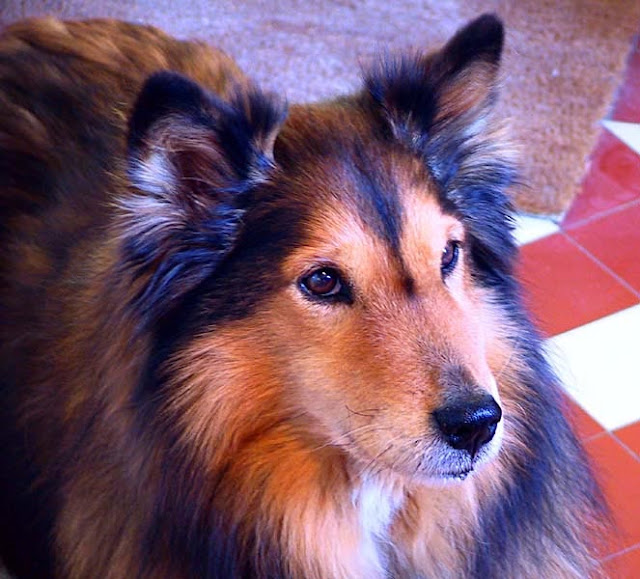 “Well, I’m not a veterinarian,” the young Air France agent said. “I don’t know what kind of paperwork we need to see.” Well I do, I told him. It’s all in this folder — rabies vaccination certificates, blood test results, health certificates signed and stamped by the USDA, and all that. “OK, I’ll just make photocopies of all these papers,” the Air France employee said, "and you'll be all set.”

Suddenly another Air France crew member appeared out of nowhere, said it was time for the dog to be put on board, and whisked her away. We were nervous about whether we would ever see Collette alive again. She was 11½ years old, after all, and the trip would be long and cold. 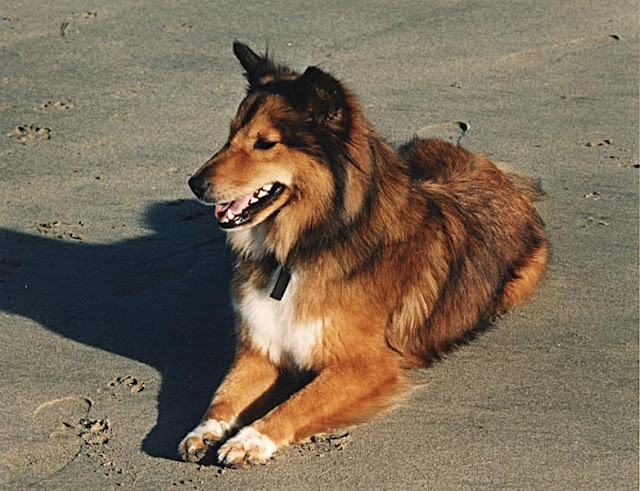 When we arrived at Charles de Gaulle airport in Paris, I went over to the baggage-claim officer's booth while Walt waited for our suitcases to come out on the conveyor belt. I told somebody we had a dog that was arriving as cargo. “We’ll go get the animal and bring it up on the elevator,” he said. A few minutes later, there was Collette — dazed and stiff, but otherwise fine, it appeared. She seemed sleepy.

And there were our bags too. So we were ready to go. 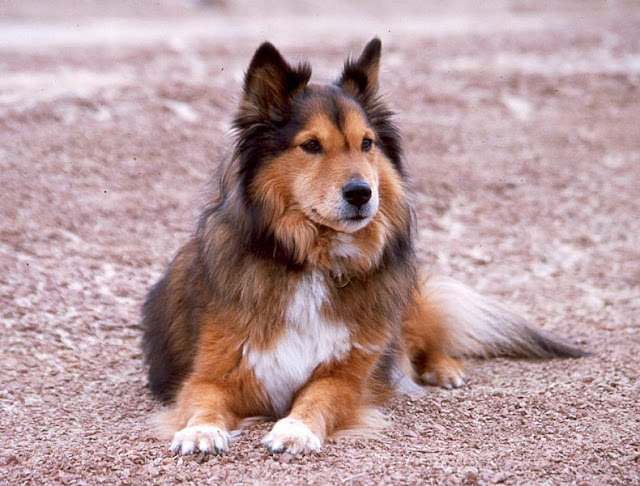 ...and in the Southern California desert

The French customs agents were on strike that day. At the customs desk, I remember, there was one young woman wearing jeans and a tee-shirt, with a DOUANES armband as her only uniform. People were lining up, with all their suitcases and backpacks on the little airport carts, to talk to her and get cleared for entry into France.

We started to get in line behind the 10 or 12 travelers who were already waiting.

“These are all Americans,” I said to Walt. “They are standing in line because they think they are supposed to. I don’t think we need to wait here.” I suggested that we just slowly push the cart with our suitcases on it and the cart with the kennel and Collette on it right past the customs line and out the door into the airport lobby. 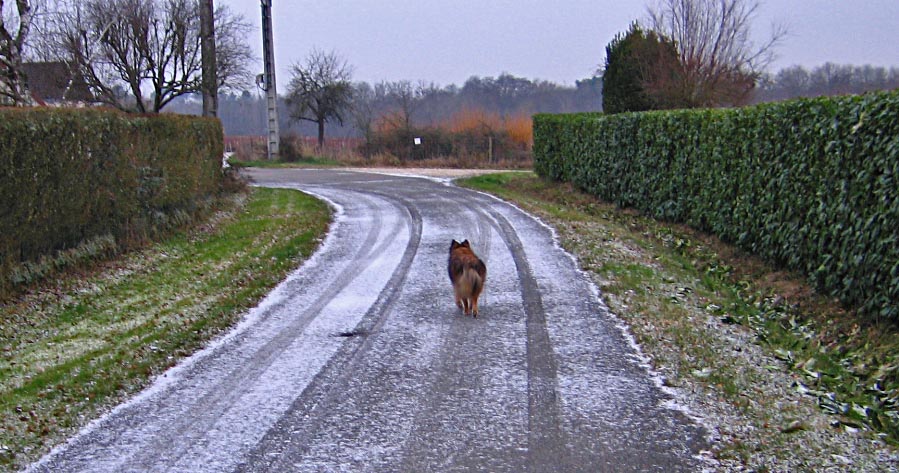 Headed out for a walk in the vineyard in January 2006

So that’s what we did. We walked very slowly in case anybody from customs might want to stop us and ask questions. I was prepared to counter any challenges with claims of innocence: “Oh, we didn’t realize we needed to show any papers...” But nobody challenged us. There we were, out of customs now, and actually in France.

P.S. Collette died six years ago today at the age of 14. She was a city dog who got to spend three years enjoying life in the country — the yard, the fresh air, French food, and vineyard walks with no leash.
Posted by Ken Broadhurst at 08:00