Our shopping excursion to Vierzon was partly successful, but partly disappointing. At the Grand Frais store, I found fresh okra (which to me is a treat), a nice navet blanc or daikon, and a bag of fresh bean sprouts (lunch today). Grand Frais is a big produce market with a good range of exotic grocery products (Mexican, Asian, etc.), and a small dairy section as well as a meat counter. It's the French equivalent of Trader Joe's, in a way.

What I don't like about Grand Frais is that they sell almost exclusively produce that is imported — big carbon footprint — and out of season — eggplant, tomatoes, etc. in March. But then the prices can be very low. I got two nice eggplants imported from Spain, where they were surely grown in greenhouses, for just 69 cents. To me, Grand Frais is a good place to buy, once in a while, a few exotic vegetables that you can't find elsewhere. 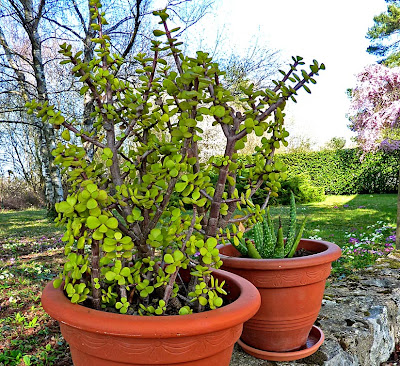 This is a different kind of jade plant from the one I showed yesterday.
CHM brought me a cutting from the SoCal desert a few years ago.
It winters indoors, as does the aloe plant.
The big Carrefour store that was my original reason for wanting to go to Vierzon turns out to have been bought out by the U chain and converted into a HyperU in January. We have a SuperU here in Saint-Aignan, and it's our best local supermarket. I was pleased and surprised to see that it is a better store than the HyperU in Vierzon, so I won't likely go there again to shop. That'll save me some hours of driving this year. 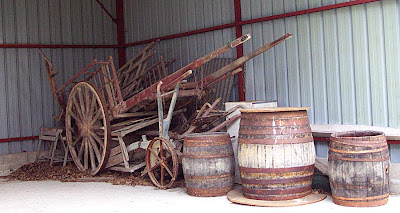 These old barrels and carts are in an open hangar
on one of our dog-walking routes.
Vierzon itself, as everybody says when you mention it here, appears to be a little gritty, run-down, and rough-looking. At least the parts we drove through were like that. We didn't go into the "downtown" or get close to the rivers and canals. What we saw certainly didn't look dangerous or anything approaching that, but it didn't give me any desire to spend time walking around in those neighborhoods. The weather was beautiful, though, and people were sitting outdoors at sidewalk cafés in a couple of places. 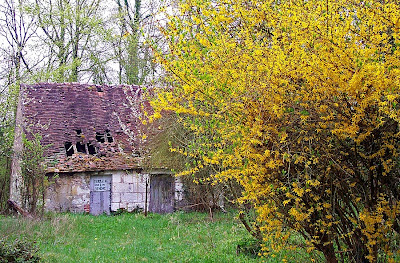 This picture is from April 2005. Since then, the roof of
this old barn in our hamlet has been repaired.
Today we are going to ride over to Bléré, a smaller town on the Cher River in the opposite direction from Vierzon. One of the wine co-ops over there — near Chenonceaux — is having its annual open house (portes ouvertes). Walt and I have never bought wine at that particular co-op, but we've tasted it because our American friends who live over on the other side of Saint-Aignan have served it to us. It's defintely good.

Sunrise from the living room a couple of days ago
I especially like the Chenin Blanc wines from the Bléré co-op. Chenin is the grape grown in the famous Vouvray and Montlouis vineyards, which are just north of Bléré. Over here near Saint-Aignan, the main white wine grape is Sauvignon Blanc. The wines are very different. I'm hoping to buy 10 or even 20 liters of Chenin this morning. They'll fill my little plastic jugs (called cubitainers or just cubis) and I'll put the wine in bottles and cork them this week to enjoy for a month or two. 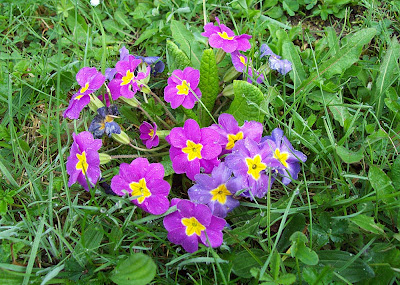 More primrose volunteers
Today's will be a pleasant excursion. We're going with the friends I mentioned. The weather is warm and sunny, and it's predicted to stay that way for another week at least. We haven't had to turn on the heat at all for a few days now. I've noticed too that some of the plants that I thought had died because of the extreme cold weather we had in February are actually starting to put out leaf buds. The warm, sunny weather is having the desired positive effect on all the local life forms.
Posted by Ken Broadhurst at 08:00