Today is my third 21st birthday. I like saying that better than admitting I'm 63 years old. But so I am.

It certainly didn't dawn on me until I hit 50 that I would ever live to such a ripe old age. I know plenty of people who are older than that, and healthy, so I'm optimistic that I might have a few more good years ahead of me. Still, it's funny to think I was born in the first half of the 20th century, and now I'm a dozen into the 21st. 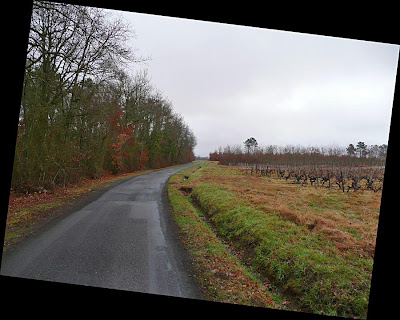 La Route Touristique du Vignoble yesterday morning
On my first 21st birthday, I was a student in Aix-en-Provence, in the south of France, learning French for six months. It was 1970, and it was the first time I had ever spent more than a few days outside my native North Carolina. 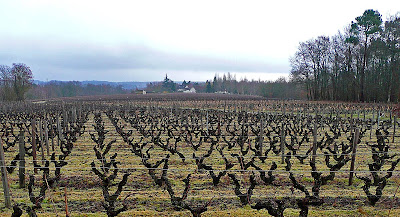 The Renaudière vineyard in early March
On my second 21st birthday, at age 42, I was living in San Francisco. I'd been out there nearly five years, after stints of about that same length of time out on the Midwestern prairie in Illinois; on Capitol Hill in Washington DC; and around les Halles in Paris. I was still learning French in all those places. 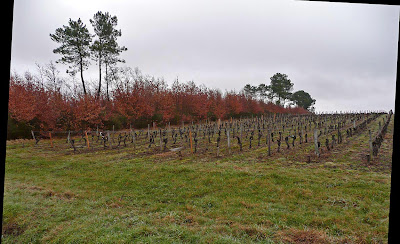 Those are little oak trees with the rust-colored leaves.
Now on 21 x 3, here I am in my ninth year in Saint-Aignan, in the Loire Valley. I came here, taking refuge, after another dozen years in California. I left the crowds, traffic, noise, and earthquakes (I hope) behind. I've discovered seasons again. And I'm still learning French. 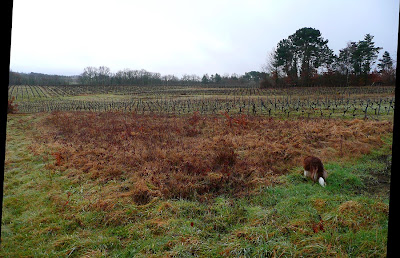 A brown dog and a brown patch of weeds out in the vineyard
Anyway, life goes on. Here in Saint-Aignan, we experienced a very relatively short but extremely cold winter this year. Now the landscape's colors are vivid, even on a gray day. The oak trees, which keep their leaves all winter, have taken on a rusty orange color. A lot of the local vegetation was burned red to brown by the recent frigid temperatures, and it shows.
Posted by Ken Broadhurst at 07:30