Yesterday the International Herald Tribune/New York Times published an article about the malady known medically as “nostalgia” — homesickness — written by Sandra J. Matt. She's a university professor in Utah who has published a book titled Homesickness: An American History. According to Matt, people who leave their home countries to work and live as immigrants elsewhere suffer unusually high rates of depression and anxiety. She writes:

“...many people who leave home in search of better prospects end up feeling displaced and depressed. Few speak openly of the substantial pain of leaving home.[...] explicit discussions of homesickness are rare, for the emotion is typically regarded as an embarrassing impediment to individual progress and prosperity. This silence makes mobility appear deceptively easy.”

Vierzon, ville d'eau
People have been migrating, emigrating, and immigrating for centuries, of course, but modern transportation and communications make it easier for people to act on the desire to change countries than it used to be. Jobs are more plentiful and better paid in some countries compared to others. In the case of many of us who have chosen to live in France, a range of factors — better weather, better food, less traffic, more peace and quiet, and a lower cost of living, among others — have motivated both retired and working people to uproot themselves. We didn't move out of necessity, but because we just thought we'd try it. 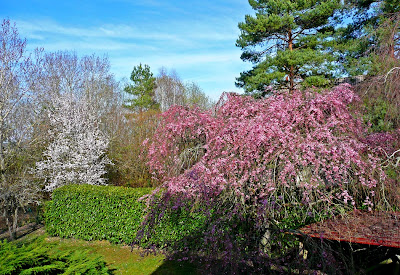 The view from our “front porch” yesterday afternoon

Sandra Matt writes that for some emigrants, improved international communications via telephone and the Internet might actually heighten feelings of displacement and homesickness. In the past, it was much harder to stay in touch with family and friends in the country you'd left behind. Now, we can stay in such regular and close contact that it might be harder to make the break and distance ourselves from the life we used to live. We're constant reminded of what we're missing.

If you're an American living in France, a sort of homesickness
might motivate you to cook and eat a sandwich like this one.
In past waves of migration — I'm thinking of the millions of Europeans who crossed the Atlantic in the 19th and 20th centuries to settle in North America — the emigrants didn't have much of a choice. They couldn't easily return to their native countries and families, for economic or political reasons. Now, Matt says, 20 to 40 percent of all immigrants to the United States ultimately return to their home countries. 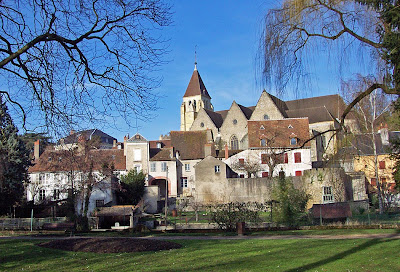 The church in Vierzon

Language is an issue that Sandra Matt doesn't address in her New York Times article. How much of the homesickness and anxiety that emigrants suffer from comes from living in an environment where their native language is a foreign language? As an American, moving from the U.S. East Coast — North Carolina — to live and work in California, for example, was in many ways as big a move as coming to live in France. The main difference was that in California, I could speak English (though maybe with a different accent).