Some news, in two categories. Past news and future news.

Future news: the weather service is predicting 120 kph/70 mph winds here tonight and tomorrow morning. So I'll spend another night lying awake listening to water drip into the attic — the trap door is in the ceiling right outside the bedroom — and worrying about our big trees blowing over.

March is coming in like a lion. This morning we have to secure some things outdoors that we let blow all around the yard a couple of nights ago.

Farther future news: Still thinking about the attic conversion and the new staircase. The picture below shows where the new staircase will go. The old stairs wrap around to the left. The new ones will continue in the same spiral, starting on the landing where the pine cabinet is. 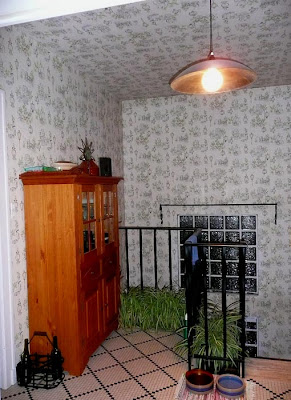 The ceiling in this picture will be cut away
to make an opening for the new staircase.
The pine cabinet will have to be moved to another location, probably downstairs. And at last we'll be able to take the old wallpaper down. This information is for those of you who have visited and are familiar with the layout of the house.

Past news: the new fuel pump was finally installed in our boiler yesterday afternoon. That was three weeks to the day when we realized we had a serious problem. Yesterday I realized that another week was nearly past, so I called the Savelys office around noontime.

Béatrice answered the phone. I told her it was Mr. Broadhurst and that I wondered if there was any progress on our repair. « Vous ne nous oubliez pas, j'espère », I said. « Ça va faire un mois que notre chaudière est en panne. » Let me see, Béa answered. We received some spare parts this morning... ah yes, here it is. We have it — got it just today.

Hah! If I hadn't called, it would probably have been some time next week before we ever heard from them. So when can you send out a technician to install it? I wanted to know. What about this afternoon? Béa said. Fine, I told her. I'll be here. I almost felt like I had called her bluff.

The Savelys technician who came to do the job is a man we know. He's done work here and at our American friends' house 10 miles south of us on several occasions. In fact, he asked about those friends. He didn't get here until after 5:00 p.m., and the work was done in less than 45 minutes. Case closed, I hope. The boiler seems to be working fine this morning.

Finally, choucroute: Yes, nine pounds (four kilos) of sauerkraut seems like a lot. I've put it in the freezer in one-kilo packages for future use. Here's an idea from a past post about eating sauerkraut with smoked chicken — it's really good and a nice change from smoked pork.

And here's a blog post about how you go about making salty raw choucroute edible, by blanching it to de-salt it and then cooking it in white wine. Of course, in the U.S. you probably will have to buy the sauerkraut already cooked, packed in jars, cans, or bags. If it's too salty or vinegary, though, you can improve it by cooking as you would raw sauerkraut, but for a shorter time. 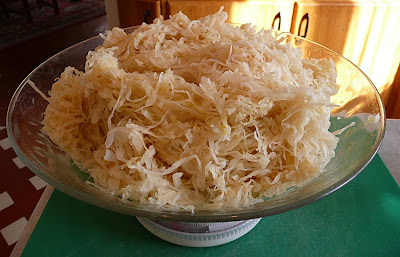 One kilogram of raw choucroute from Alsace
At Intermarché the other day, when I ordered my four kilos of raw sauerkraut, the gentleman behind me in line, who was about my age, said to me: « C'est beaucoup pour deux ! » — "That's a lot for two people!" He was joking. I looked at him and said yes, I realized that, but there would be three of us. Ba da boom.

As I was walking away, I heard him order a kilo of choucroute himself. The woman behind the counter said: "Raw sauerkraut?" Oh no, I heard the man say. I made that mistake once, and it was awful. Give me the sauerkraut that's been cooked in white wine.

I guess he doesn't have the cookbook I use.
Posted by Ken Broadhurst at 08:33