Yesterday afternoon we were cooking and listening to some American music from years gone by. For some reason I started wondering how old some of the artists are now, and I looked people up on Wikipedia to find out. Linda Ronstadt, b. 1946. Emmylou Harris, b. 1947. Jackson Browne, b. 1948. All my generation.

Did you know that Kate McGarrigle was Rufus Wainwright's mother? You must know him. He's very talented, and has become quite famous. So has his sister, Martha Wainwright.

The first time I ever heard of Kate McGarrigle and her sister Anna, I was living in Paris in the early 1980s. I was about 30 years old. They had recorded an album called Entre Lajeunesse et la sagesse (called just The French Record in English). It included two songs that were "hits" in France back then: one was the title cut, and the other was called Complainte pour Ste-Catherine. I heard them a lot on the radio. A 1976 picture of Kate McGarrigle posted on her sister Anna's blog.
Sympathy, apologies, and thanks to Anna McGarrigle.
Both these French-language songs were clearly North American. They came out of the folk music tradition. I guess I was struck by them because I was an American living in Paris, getting to be pretty fluent in French, and the McGarrigles' songs were the evidence that there was a thriving French reality in North America. That mattered to me.

The song Entre Lajeunesse et la sagesse is about a street in Montréal called Lajeunesse and the coming of age that is caracterized by la sagesse — wisdom, or at least well-behaved adulthood. It's a play on words, because la jeunesse means "youth." It says that between Lajeunesse street (or youth) and wisdom there is « un arrêt de métro, deux dépanneurs, un bricoleur, une affiche de Brigitte Bardot ».

I learned that un dépanneur in Québec is what we call a convenience store in the U.S. The term isn't used that way in France. Une panne is a breakdown, an outage, or a mechanical failure of some kind, and the verb dépanner means both to repair or fix something and, figuratively, to help somebody out. Un bricoleur is a jack of all trades, a handyman.

And the song brought home the fact that there is a métro in Montréal, just like in Paris. I must have already known that — I had spent a week or two in Québec in 1980, around the time the songs were popular. I went to Québec again in the summer of 1984, with Walt.

Here's an excerpt from that concert in the bar in Rochester.
It's the song I describe a little below, with Anna at the piano.
That's Kate McGarrigle playing the squeezebox.
The other song, Complainte pour Ste-Catherine — the title means something like Lamentation for Saint Catherine — is also about a street in Montréal. It talks about how cold it is in Québec, and about the warmth of the métro. It's about walking around under Saint Catherine street — there's a whole underground city in Montreal, so people can do their shopping without having to brave the elements in winter. Again there was that subway again. I spent a lot of time riding around on the Paris subway in those years.

Montréal must be a lot like Paris, I thought. The song was about coming of age, and about living the simple life, and about how things were changing. I liked this verse in the song:

It was French, but a different French. It used words and expressions not used in France. Chauffer, for example, meaning to drive a car, like a chauffeur. Une convertible — that's obviously the American word, but pronounced with a French Canadian accent.

And then there was the line about la gloire being inutile — glory isn't really worth much. Did gloire mean something different in Québec French? Not "glory" but "showing off." Driving a convertible might impress people, but the price of gasoline for such a fancy car is prohibitive. Driving a convertible in Québec, the frozen north? That was hard to imagine. I liked the words, the ideas, and the images. 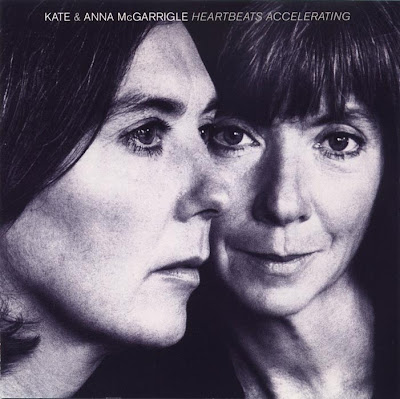 Kate and Anna McGarrigle in the late 1980s
One day a couple of years later, Walt and I were living in Washington, D.C. We were watching a lot of public TV. One night, there was a show — a McGarrigles concert recorded in a bar in Rochester, NY — featuring Linda Ronstadt and Maria Muldauer. Kate and Anna McGarrigle, as it turned out, were the authors of songs like Heart Like a Wheel, Talk to Me of Mendocino, You Tell Me that I'm Falling Down, and others.

The McGarrigle sisters — there they were again. Kate thanked Ronstadt and Muldaur, who had recorded and made big hits out of a few of their songs, saying that if it weren't for them "we wouldn't be here today, singing in a bar in Rochester." Ha ha ha.

During that concert, the McGarrigles even sang the French songs I knew. I recorded the concert on a Betamax tape! Years later, I was able to record it onto a VHS tape, so I didn't lose it when the Beta machine died. And then years later again, I was able to get the show recorded onto a DVD. I think it was in 2008 or 2009. We watched it last night. It's a crummy recording, but a great concert, and a great memory.

After that, Walt and I moved to San Francisco. It turned out that the McGarrigle sisters did a concert out there every year. They had quite a few fans. We attended every one of their performances that we ever found out about. They sang many times at a place called The Great American Music Hall in San Francisco's Tenderloin district. It was almost an Old West saloon. We were so close to the stage some years that we almost came to feel we were friends with the McGarrigle sisters. We had such a long shared history. I listened to their songs in the car on my long commutes to and from work in Silicon Valley.

Then one year the annual concert was held at the auditorium at San Francisco's Palace of Fine Arts. We were enjoying the music, and at some point I turned around and saw Linda Ronstadt sitting right behind us, in the next row. At the end of the concert, Kate called Linda up on stage to sing Heart Like a Wheel. That must have been in the mid-1990s. I was impressed that Ronstadt would be there in the audience, like we were.

Another year, Kate talked to the audience about her life and Anna's in Canada. She said that she lived in Montreal, and that back in the 1960s and '70s she had always enjoyed going to visit Anna, who lived out in the country, because the food was so fresh and good.

Now, she said, in the 1990s, all the good food is to be found in the cities. Out in the country, the only food you can get is standard, packaged, pre-cooked, factory-produced supermarket products. You have go into the city to shop for better products in farmers' markets and specialty shops. And pay the high prices. It made me realize how the world has been turned upside down in so many ways over the past 50 years.

Since we moved to France in 2003, we have kind of lost touch with the McGarrigles. The new generation — Rufus and Martha — took over. Here in France, we didn't hear a word about Kate McGarrigle's passing. Walt and I read numerous blogs and Facebook every day. We both read the New York Times faithfully, and I at least scan the headlines in the Washington Post, The San Francisco Chronicle, and the L.A. Times nearly every day too. We watch French television news. And still, nobody told us. Maybe we just missed it.
Posted by Ken Broadhurst at 17:05