When we bought our house just outside the town of Saint-Aignan-sur-Cher in 2003, one of the things about us that attracted us to it was its huge attic. And also its big, flat yard (or garden), where we could have a vegetable garden. It was private without being isolated, and it was at the end of a road where there is very little traffic.

Why was the attic a point in the house's favor? It was because the house wasn't really as big as the house we had in mind when we started looking. It has only two bedrooms, and we wanted three or four (for guests, our computers, etc.). Plus, the bedrooms are small. Well, not that small, because a king-size bed (2 m by 2m) fits comfortably in one of them. But small compared to what we were used to.

The attic was pure potential. It was big enough to be converted into a suite comprising a family room and a large master bedroom. We could transform a house that already had a lot of attractive features — a spacious living room, a big front terrace, and huge bathroom — into one that met all the criteria we had in our minds when we started looking for a house in France.

So what stopped us from doing the attic conversion until now? Money, of course. But it's more complicated than that. 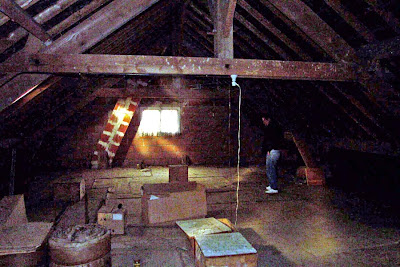 Here's the attic looking toward the window in the north side
of the house. Walt is studying the possibilities.
First, we decided to live in the house for at least a year before undertaking any major expansion. We didn't know what other kinds of renovations might need to be done first, and what systems might need upgrading. We figured we'd better repair what needed repairing before we started expanding.

As it turned out, we absolutely had to have new windows put in all around, and we needed both plumbing (new faucets, shower stall, and toilet) and electrical work (more outlets, preferably grounded ones) done. We did a lot of painting, and we had a wood-burning stove put in to make the fireplace usable. We also bought a rototiller so we could have the big vegetable garden we had imagined when we first saw the place. We got connected to the new sewer lines.

None of that broke the bank. The roof and heating plant have proved to be sound. There have been no significant water or dampness problems. The layout of the house is satisfactory in general. The kitchen felt just big enough, and it was practical as furnished for the time being.

The problem for us was that the dollar crashed. When we paid the down payment on the house, the U.S. dollar was at parity with the European euro — a thousand euros cost us a thousand dollars. Four months later, when we paid the balance on the house, the euro was worth about $1.10 U.S. That didn't seem radical. By the time we got here in the summer of 2003, the euro was up to $1.20. At that point our thousand euros cost us twelve hundred dollars.

And then the dollar kept falling. We didn't know how far down it could go. In fact, the dollar's low point a couple of years ago, the euro was worth $1.60. In other words, if we wanted to "buy" 1,000 euros, it cost us not 1,000 dollars but 1,600. That hurts. Widely fluctuating currency rates made it impossible for us to plan and budget with confidence.

For us, living on dollars, everything became more and more expensive. We were still trying to figure out how much it was going to cost us to live here. How much, in dollars, would we be spending on electricity, heating oil, fuel for the car, water, house repairs and improvements, taxes, health insurance, and all the rest? 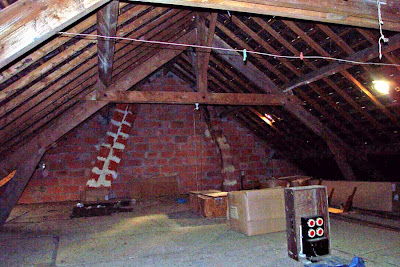 Looking south. Clearance under those horizontal beams
is about 6'6" — adequate.
What about our legal status as foreigners in France? Or, more importantly, in the European Union. British people can move to France the way Californians can move to Illinois or North Carolina, without asking permission. But as non-Europeans, we had to apply for visas and residency permits.

From 2003 until 2009, applying for residency permits was an annual affair. Every June, we would get a letter from the Préfecture in Blois "inviting" us to gather together all sorts of documents that we needed to justify another year of residency in France. Those included proof of our address (easy: an electric or phone bill), copies of our birth certificates with translations (I did my own translations, making that a lot easier than it might have been), and, at the beginning, proof that we had health insurance.

Most importantly, every year we had to show the French authorities that we had enough money to live here for 12 more months without needing to look for gainful employment. As the dollar kept going down in value, we of course had less and less money when converted to euros. At what point would "enough" money no longer be considered enough by the French bureaucracy?

More recently, as we all know, U.S. interest rates went through the floor and the stock market went down in flames. So much for good investment income. 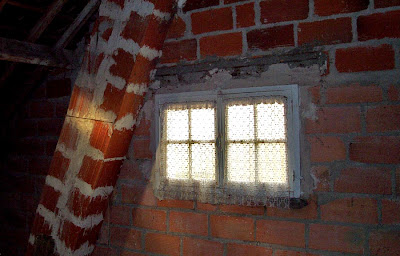 The house is built out of hollow bricks and
concrete blocks. This is the northside attic window.
As a result, we figured we'd better hold on to as many dollars as we could. We got very conservative with money, and that ruled out major home improvement projects. Wouldn't it have been a catastrophe if we were denied that next residency card and were forced to decamp to the U.S., after having moved here lock, stock, and barrel?

What changed? In 2009, we were granted 10-year residency cards — the carte de résident rather than the annual carte de séjour temporaire we had been under since 2003. All of a sudden, nobody is breathing down our necks any more about our resources and finances. With the carte de résident, in fact, came the right to work and get paid (not that we are planning to). 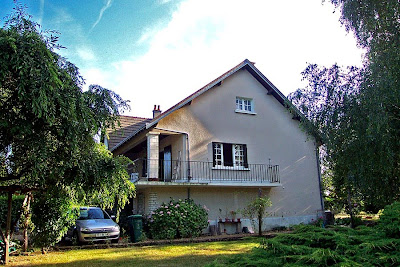 Here's the house seen from the north,
with that attic window up top.
Recently, the dollar has been moving up slightly — or the euro has been moving down. Last fall the euro was worth about $1.50. This morning — I just checked — it's down to just under $1.36. That's a nice trend, for us. With several euro-zone countries (Greece, Spain, Portugal, and Ireland, among others) having financial difficulties that require bailouts, and with the U.S. starting to raise interest rates, a strengthening dollar seems to be the trend. Who knows if it will last?

The other factor for us is that both of us now are within easy reach of starting to collect retirement pensions. We won't be "rolling on gold" as they say in French, but we will finally have some money coming in — even if the income is in deflated U.S. dollars, and the expenditures are in inflated euros. Having just an "outgo," with little or no income, has gotten old. These are some of the realities you have to deal with as an American expatriate in Europe.

Voilà. It's time to take the plunge. Oops, bad choice of words. To spread our wings and fly. Up into the attic. Grow and prosper. We can always hope.
Posted by Ken Broadhurst at 07:10