Can you get "black radishes" in the U.S.? We like to buy them here, where they are called « radis noirs ». I should put that in the singular, though, because normally you buy just one. A radis noir is the size of a short fat carrot or a saucisson/salami. Or like an elongated redbeet.

You peel the big radish and it's no longer black. It's white inside, like a radish. And it has pretty much the taste and texture of the little radishes called radis roses or radis ronds — sharp, a little peppery, and crunchy. Here's a blog topic showing the black radish that also gives a salad recipe. 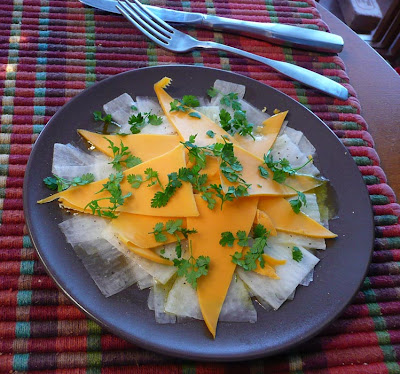 Salade de radis noir et mimolette
Walt makes a salad using thinly sliced radis noir and mimolette cheese. Mimolette looks a little like colby or American cheese. It's orange colored. It comes from Holland, originally, I believe, but it is also made in France. I've used it to make pimento cheese, for example.

Mimolette comes either frais (fresh) or sec (dry). Either one is good with this salad. I could see making it with dry jack cheese, but you wouldn't get the contrast in color. I think a good, sharp colored cheddar would be good with the radish.

As for the radish, you could use little round radishes sliced thinly. Or you might be able to use an Asian radish like daikon. The daikon is white but has the same shape as a black radish. It's milder, according to what I read. With either radish, it helps to have a mandolin so that you can make very thin slices. Or use a vegetable peeler.

The dressing is a dribble of balsamic or sherry vinegar, a drizzle of olive oil, some salt and pepper, and a few fresh chervil, parsley, or tarragon leaves.

* * *
By the way, here is the label from the barbecue sauce I used a couple of days ago to make pulled pork. 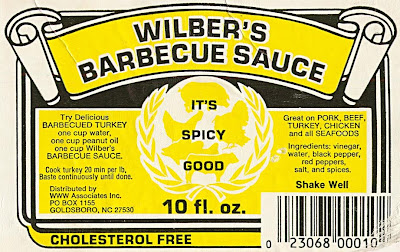 I just wanted to show you that the spelling of the name really is Wilber's, not Wilbur's. Wilber is the restaurant owner's last name. The restaurant is on U.S. Highway 70 in Goldsboro, North Carolina.
Posted by Ken Broadhurst at 07:40