That means "another breakdown" — another piece of equipment is on the blink. It's the boiler — la chaudière — which is what serves as a furnace at our house. It runs on fuel oil to heat water that is sent as steam into the big cast iron radiators in every room in the house. Or at least it used to.

It started acting funny about a week ago. By Saturday, it was clear that there was a real problem. I called the company with which we have a contrat de dépannage — an emergency service contract. A technician came out Saturday afternoon, took the thing apart, cleaned some of the heating elements, and declared the chaudière to be dépannée. « Pas de soucis », he said — No worries. 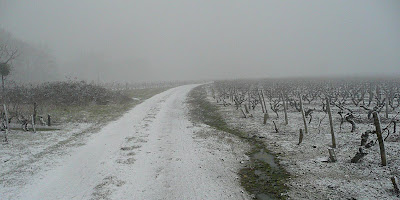 Yesterday afternoon in the vineyard. Snow was coming down
hard, with a brisk wind, but you can't see it in this picture.
Well, he was wrong. We didn't need to turn on the boiler Saturday evening. We had a fire in the wood-burning stove instead. Then we used the boiler for a few minutes Sunday morning, and everything did seem sort of okay. There was a strong smell of fuel oil in the utility room where the chaudière resides, but I told myself that would soon go away. We turned the boiler off by about 10:30 a.m. because we were going up to Blois for lunch and a long afternoon. It wasn't particularly cold outside. 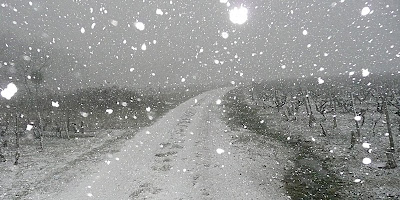 Look what the camera saw when I turned on the flash.
When we came home in the evening, I turned the chaudière on again. I heard the usual whoosh of the burners firing up. But the house didn't really get warm. I didn't think a lot about it, and at bedtime, I went downstairs and turned the boiler off without paying attention to see whether the reset warning light was glowing.

Monday morning, it became clear that the thing wasn't working. After a few minutes, the boiler would conk out and the yellow reset warning light would be shining. I pushed the reset button a few times, but the boiler would run only for three or four minutes before stalling out again. I called the emergency service number.

The woman on the phone said they could send somebody over Tuesday morning. Great. The temperature outside was dropping, and we had snow flurries during the day. We built a fire to keep at least the living room warm. 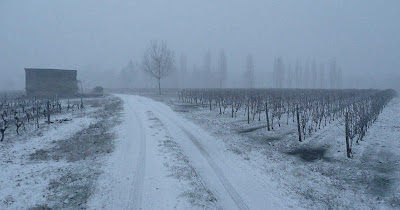 Trudging back home in the blowing snow —
the light suddenly turned very blue.
The technician — a different one — came by as promised the next day. We had the boiler running. He looked at it and listened to it. When it cycled off after heating the water to the programmed temperature, he listened carefully.

« C'est la pompe. Il faut la changer, » he announced — "It's the pump. It needs to be replaced." I thought he meant the pump that sends water/steam to the radiators. We've had trouble with that before. It gets stopped up. We've figured out that if you take a big screwdriver and take the face plate off of it, a little water dribbles out and it starts working again. That's easy. 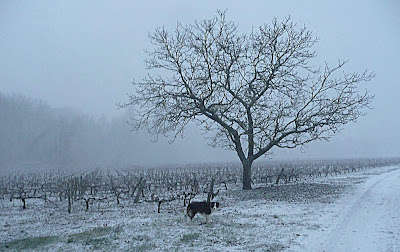 Callie doesn't mind the snow, but this time
her back was covered in big wet flakes.
"No, it's the fuel pump," the technician said. That made a lot of sense, given that the boiler room smells to high heaven of fuel oil. It didn't use to. "I'll take down all the information and get you an estimate on a new pump." He said he thought it would cost between 150 and 200 euros. We went upstairs and built a wood fire.

Yesterday morning the temperature was in the mid-20s F when I got up. The boiler worked for an hour or two, and then it conked out again. So we built another wood fire. I called the service company to let them know this is urgent. The house is getting cold.

The hamlet is just up ahead.
Snow was coming down hard.
This morning the temperature is in the mid-20s (-3.5ºC) again, and right now it is snowing. The boiler is working for the moment, and the wood fire is going too. We put a couple of big logs in the stove at bedtime last night. I woke up at 4:30 and went to check on it. There were live embers, so I put some more logs in, threw in some twigs and crumpled paper, and got it going again. I went back to bed.

I hope it doesn't take long to get the new fuel pump. The boiler just this minute stalled out again. Temperatures are supposed to stay below freezing for the next four or five days. As you can see from the pictures I took yesterday afternoon, we had snow that stuck. Nothing like Washington and Baltimore, but it's cold here too.
Posted by Ken Broadhurst at 07:28