Five years ago already. We hadn't even been in Saint-Aignan for two years at that point. Now it's been seven.

A new friend, Laurie, came to visit the weekend of February 20 that year. We had never met in person, but had mutual friends and had gotten to know each other on an Internet forum about traveling and living in France. 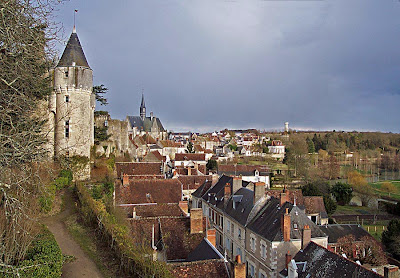 A view of Montrésor from the grounds of the château
One of the places we visited that weekend was the village of Montrésor, 15 minutes south of Saint-Aignan by car. Montrésor is one of the « plus beaux villages de France », a title awarded by a preservationist association. It has a château and a Renaissance church. 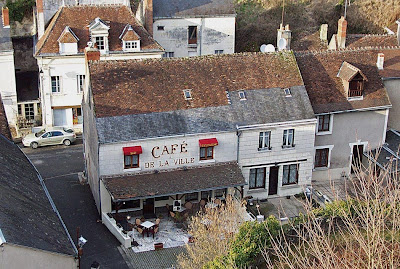 There's just one café in Montrésor, just below the château
The weather was cold. We went into the château at Montrésor and decided to do the tour of the château. There was a piano in a big ballroom that had been brought down from Paris generations ago. Chopin, they said, had composed music on that same piano. The owner of the château asked Laurie if she wanted to play it, and she did. She's a musician and teacher, and it was beautiful. 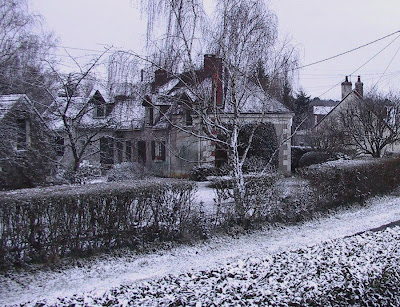 Looking across the street at our neighbors' house
that morning five years ago
Sunday morning when we all got up, we saw that it had snowed overnight. Laurie's plan was to drive up to Normandy that day. Back then she lived in Alabama, but a light snow didn't give her pause — she's originally from Minnesota and went to graduate school in Illinois, as I did.

Our back yard a little later that same morning
Since then Laurie has moved to North Carolina, and we were able to have a get-together at her house there in February 2009, with our good friends Evelyn and Lewis who still live in Alabama and made a very long drive to get there. It didn't snow, but it rained a flood, as we say in N.C. 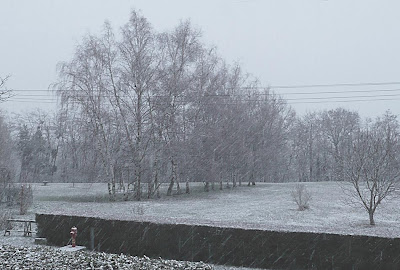 Live from Saint-Aignan, 20 February 2010, a Saturday morning
surprise! The view from our front porch just a minute ago.
Good times and good memories. This morning a "wintry mix" of snow and rain is supposed to fall on Saint-Aignan. Right now, it's a heavy snow shower — big wet flakes. Plus ça change, plus c'est la même chose.
Posted by Ken Broadhurst at 07:38