Chilly but not too cold

I mentioned yesterday that we got our water bill. We are billed just twice a year, and the one that comes in the winter is an estimate. An services des eaux agent comes to read the meter in June or July, just once a year. The bill is 316 € for six months, but that includes water (consommation eau potable 127 €) and sewerage (collecte et traitement des eaux usées 160 €). There are various other charges and fees to bring it up to 316 €.

Maybe the next bill, after they've read the meter, will be lower. Ever the optimist. But we probably used a lot of water on the garden last summer, when the weather was so dry for months on end. 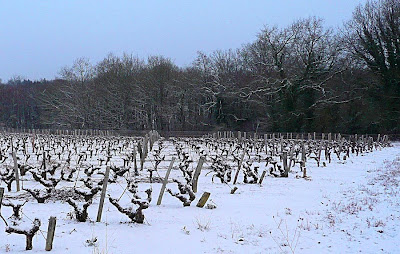 Thursday morning outside the back gate
11 Feburary 2010
As for the boiler, the estimate for the cost of replacing the fuel pump didn't come with yesterday's mail. Maybe it'll come today. We've kept the wood fire burning continuously for 48 or maybe 72 hours now, which is something we don't usually do. 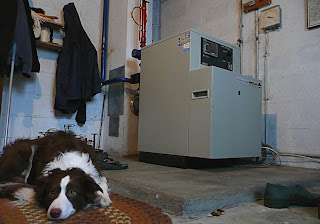 Here is what the boiler looks like.
There's Callie, begging to play.
And the fact is, the boiler does come on when we've left it off long enough for its compnents get good and cold. It's been willing to fire up and run for an hour or two the last few mornings, and that's enough to get the radiators good and hot. It takes the chill off. That's what happened again this morning.

I don't know what we'd do if we hadn't had the wood stove put in four years ago. Or if we didn't have a good supply of wood. Then we would be in trouble. 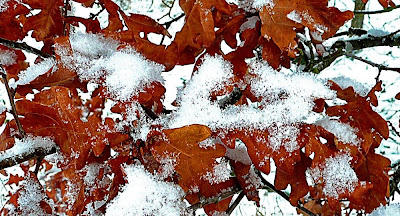 Oak leaves turn orange but don't fall when winter comes
Fact is, we told both the technicians who came out that we also burn wood for heat, and that we only use the boiler in the morning to take off the nighttime chill. This morning when I got up, the temperature in the living room was 13ºC, or 55ºF — and that was with a slow fire burning in the stove, not more than 15 feet from where the thermometer sits! Now, 90 minutes later, with the boiler on and the fire stoked up, it's up to 15.6ºC, the very low 60s F. It doesn't feel too cold in here.

When I called yesterday about the estimate and talked to Déborah (she introduced herself by her prénom when she answered the phone), I told her I thought they might make a little effort to speed things up, since the house was getting colder and colder. 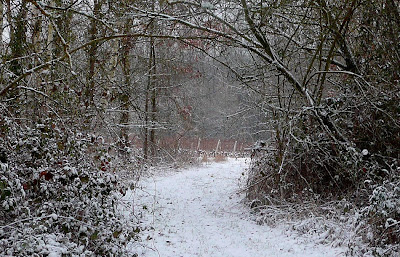 One of the paths Callie and I take on our walks
« Vous n'avez pas du tout de chauffage ? », she asked — almost accusatorily, I thought — "You mean you don't have any heat at all?" I wasn't going to lie to her, so I told her too that we are burning wood for heat. At the same time, I thought it was none of her business whether or not we had an alternative heat source. We have a contract with her employer for emergency service, and it's now been a week since I first called them about the boiler malfunction.

If I had said we had no other source of heat, would they have sped things up? Or would we have just been left to shiver and moan? 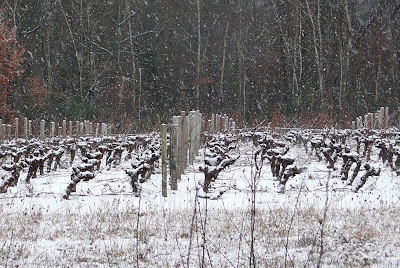 Thursday morning at La Renaudière
I think it's time for me to investigate other companies that might provide the same maintenance and emergency repair services for a similar price. There's a new chauffagiste in Saint-Aignan, right down by the bridge.

As with car and house insurance, it might turn out that I can get a much better deal, and better service, by changing suppliers. Inertia is a nearly irresistible force, but sometimes you just have to get the lead out and do some legwork. 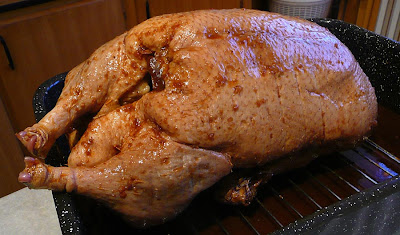 The duck marinated for two days in the lacquering sauce.
Meanwhile, the oven will help to warm up the house this morning. I'm getting ready to put that 8½ lb. lacquered duck in there to roast for a few hours.
Posted by Ken Broadhurst at 08:36