To me, lacquered duck is an unfamiliar expression in English, but not in French. I knew and remembered canard lacqué from my Paris days, between 1974 and 1982. Back then (and maybe still) there were a lot of Chinese or Vietnamese restaurants along, for example, the rue Monsieur-le-Prince in the Latin Quarter. I worked in that neighborhood for years.

An American friend and I used to meet regularly for lunch in those restaurants. The food was always appetizing and delicious. It was a nice change from standard French cuisine, which is what I ate at home. I didn't have a refrigerator in my apartment for the first two years I was in Paris, so I ate a lot of food from delis — charcuteries — where I could buy small portions for just one meal. In those days, there weren't as many Asian delis (traiteurs asiatiques) in Paris as there are now. 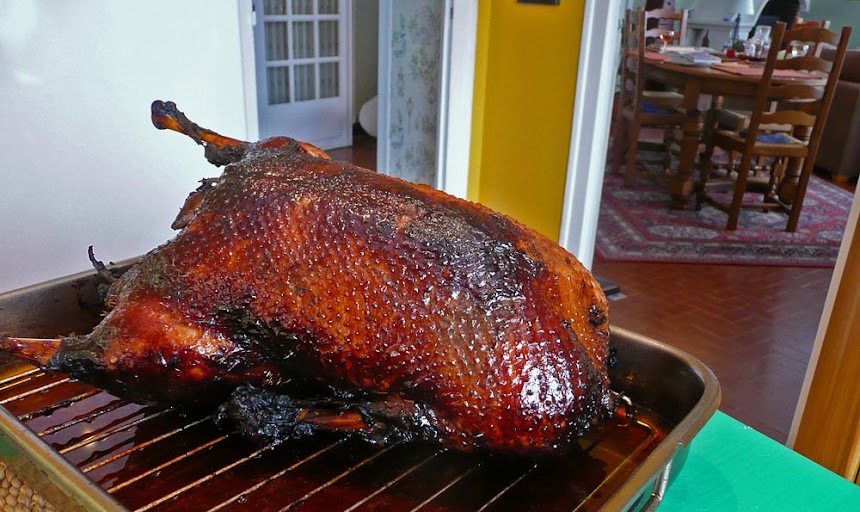 My version of a canard lacqué

Anyway, later there was a Chinese restaurant down on the rue de la Convention, in the 15th arrondissement near the Porte de Versailles, that I went to often with friends who lived in that neighborhood. My favorite menu item was the duck — canard lacqué — because it was crispy and tender, salty and sweet, spicy and juicy.

We don't have Chinese or Vietnamese restaurants in Saint-Aignan. There is one over in Montrichard, but I haven't been there because I haven't heard good things about it. There are also some vendors of Asian foods like pot stickers and spring rolls working the outdoor markets around the region, but I've seldom bought anything from them. We just make our own Asian-style dishes, including Thai curries, spring rolls, fried rice, kimchi, and lacquered duck, when we can get the ingredients. 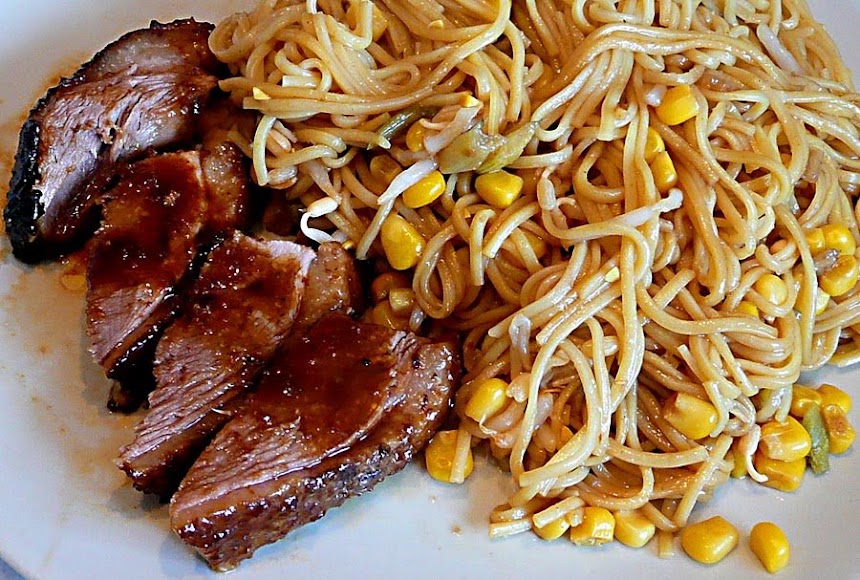 If I had realized how easy it is to make canard lacqué, I wouldn't have waited so long to do it. You just marinate the duck in a spicy sauce for a day or two in a cold place. This time of year, our cellar (a downstairs pantry with a sand floor and no heat) is about as cold as the refrigerator, so it can serve as a walk-in and we can keep a lot of things down there that wouldn't fit in the fridge in the kitchen.

I actually had a plastic freezer bag that was big enough to hold the whole duck (8½ lbs.) so marinating it was easy. Making the marinade was easy too. Here's a list of ingredients:

You can modify the ingredients and quantities as you see fit. The marinade should be salty, sweet, and spicy at the same time. But remember, it's just a marinade and basting sauce, so it can be strongly flavored without taking away from the flavor of the duck. 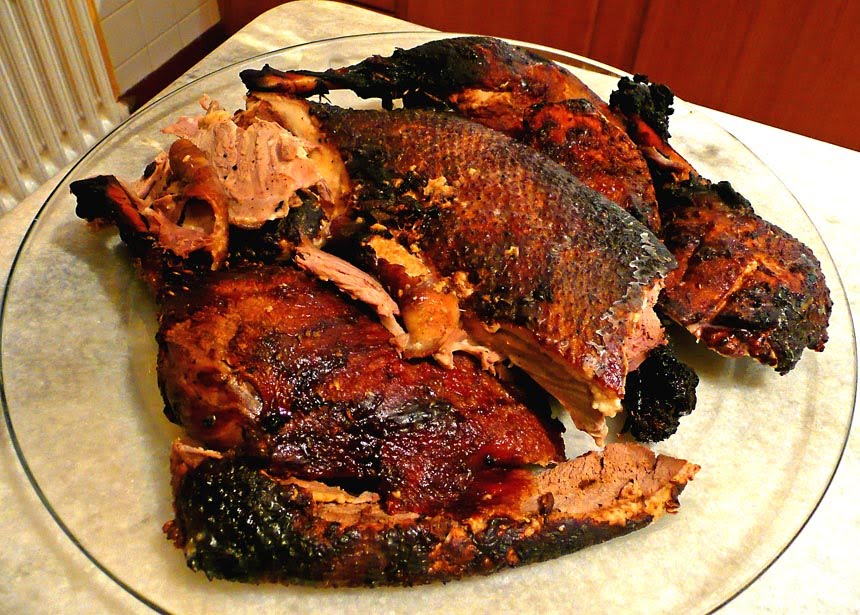 The carved duck reheats well — better than left over chicken.

Marinate the duck overnight or for as long as 48 hours. Use a plastic bag if you can. Otherwise, you'll need to brush the duck with the marinade every few hours as it marinates to make sure the skin and meat are well flavored. With a sharp fork or skewer, poke some holes in the the duck breast and thighs so that some of the marinade can penetrate into the meat.

Reserve the marinade and brush some onto the duck just before you put it into a 200ºC/400ºF oven to roast for 15 minutes, on a rack. Pour some water in the bottom of the roasting pan or dish so that the juices won't burn. When the duck skin starts turning brown — be careful not to let it burn — turn the heat down to 150ºC/300ºF and cover the duck with aluminum foil so that it can cook through completely. Leave it to cook, covered, for an hour or even 90 minutes (depending on the weight of the duck).

Meanwhile, put the reserved marinade in a saucepan and set it on low heat to cook and thicken up. You can use it as a basting sauce and also serve it at the table, but make sure it is cooked. It will be better thickened than too runny.

When the duck is ready, take off the foil and brush it with the marinade a time or two as it continues to cook and brown for 15 or 20 minutes. Turn up the heat if you don't think the duck is browned enough, but again be careful that it doesn't get too dark. The marinade will caramelize fairly quickly in a hot oven.

Take the lacquered duck out of the oven, put the foil back on, and let it rest and cool for as long as 30 minutes. Then carve it as you would a chicken or turkey. 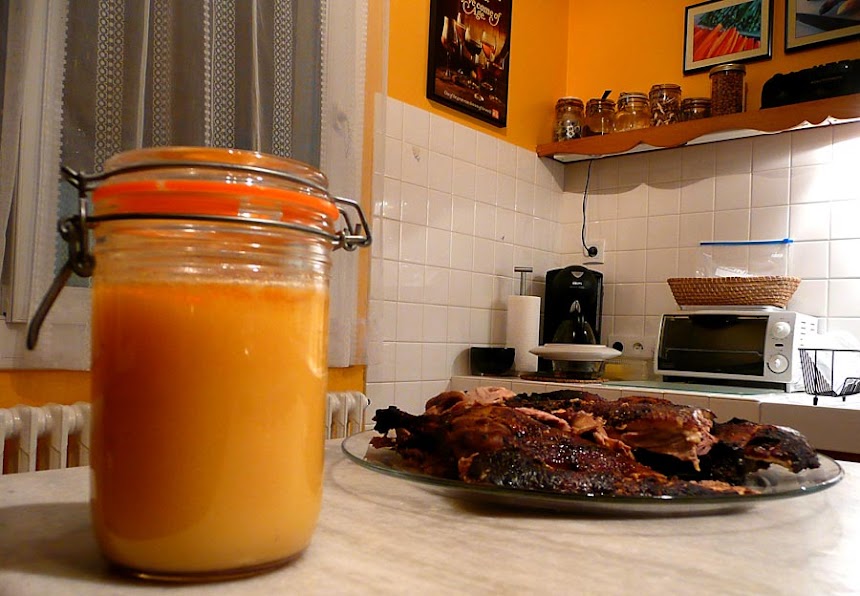 Nearly a quart of duck fat, colored yellow by the marinade,
that I "harvested" after cooking the canard lacqué

The juices in the roasting pan will include quite a bit of duck fat. Pour it all into a bowl and set it in the refrigerator. The fat will harden and you'll be able to lift it off with a fork, leaving you with a bowl of nice fragrant cooking juices you can use, along with some of the thickened marinade, to flavor a dish of Asian noodles or fried rice, for example.

And don't throw the fat away. Melt it in a slow oven and store it in a jar in the refrigerator. If you do other Asian-style cooking, you'll find plenty of opportunities to use it for frying and flavoring different dishes.
Posted by Ken Broadhurst at 08:50