Instead of driving up to Blois yesterday to look for either vacuum cleaner bags or a new vacuum, we decided to drive over to Romorantin. It's a little closer (20 miles each way instead of 25), and the drive is a lot easier because you don't have to drive through the middle of half a dozen villages, on congested narrow streets, to get there.

One of the things we've been meaning to do for years and are just now getting around to is having our car registration changed so that it has both our names on it. Right now, the Peugeot is registered in my name only. Under French law, if I die, there is no way Walt can inherit the car. I can't leave it to him. It would go to my mother or sister in North Carolina, I think — they are my closest relatives.

All my mother or sister needs is a ten-year-old diesel Peugeot that is located in France and not eligible for import into the U.S., don't you think? And then Walt would be stranded. He'd have to go out and buy a new car in the middle of all the turmoil. Or buy the Peugeot back from my mother or sister. It would be a hassle. 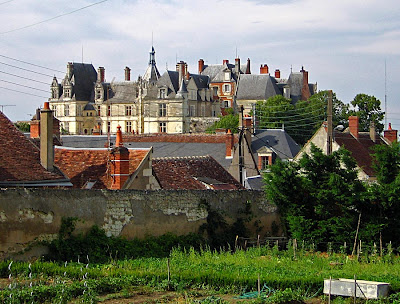 The château in Saint-Aignan on a sunny summer day
I think about this partly because our friend J-L passed away suddenly last October. His car was registered in his name only, and his estranged son, who doesn't even have a driver's license, inherited it. J-L was only 52. I'll be 61 in March. Besides, my father died exactly the same way — suddenly, in his sleep — just over 20 years ago at the age of 64.

Anyway, I don't plan to "disappear," as we say in French, right away, but it is always good to have your affairs in order. When I bought new car insurance a couple of weeks ago, the people at the insurance office said the préfecture was the place to go if I wanted have my car registration certificate modified.

The préfecture is the central administrative office in a French département, which is the equivalent of a county. The prefect, or préfet, is appointed by the national government. He (or she — I don't know if there are any women prefects) is responsible for the police, immigration matters, and vehicle registration, among other things. 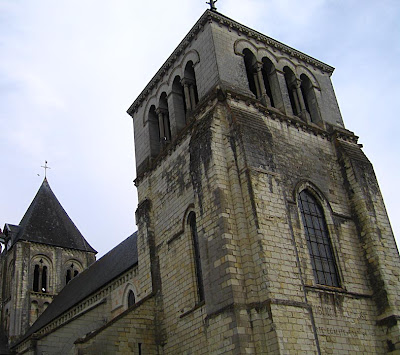 The church in Saint-Aignan
Our prefecture is in Blois, but there is an administrative outpost in the town of Romorantin. I believe every département in France has one préfecture and two sous-préfectures, sub-prefectures, like the one in Romorantin. We got all the papers together and decided to go there yesterday morning to try to have the registration changed.

We found a place to park, and then walked around the neighborhood in central Romo (that's what it's called locally) until we found the entrance to the administrative offices. In the lobby we discovered a dozen or more sullen-looking people — pas contents, mais résignés — in the waiting area. A sign said to take a number from a little ticket dispenser mounted on the wall, so Walt did. 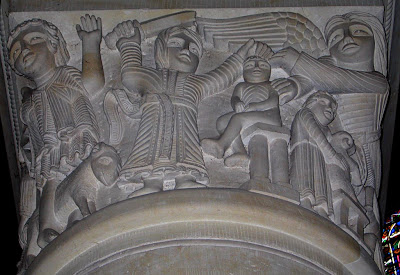 Somehow this scene reminds me of the waiting room
at the préfecture in Romo
Then I noticed a big sign on an easel in one corner of the room. There were at least ten paragraphs of text on the sign, but the first words that caught my eye were « panne informatique au niveau national affectant la délivrance de la carte grise » — "computer breakdown affects the delivery of vehicle registration cards, " or something like that.

I started reading the poster. "We may well be unable to issue you a new registration certificate today because of computer problems." And so on and soon. There was a lot of text. Cut to the chase: at the bottom of the poster, it said: « N'attendez pas inutilement ! » — "Don't wait unless you absolutely have to" or something to that effect. 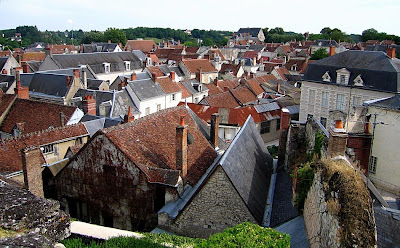 Saint-Aignan rooftops
Well, that decided the matter for us. We just turned around a walked right back out. Walt said we were tenth in line, according to the number on our ticket. There was no way we were going to spend hours there to get the registration changed. It will have to wait.

Since yesterday, I've read on the Internet that this computer problem with cartes grises has been going on for months. Last fall there were horror stories recounted in newspaper articles describing people having to wait eight or ten hours in préfectures around the country waiting to get their new cars registered.

I think what happened is that the government decided to enter all transactions concerning used vehicles into a system that was designed just to process the registration of new vehicles sold in France. The software couldn't handle the load.

But it wasn't a wasted trip. We stopped in a Boutique France Télécom — Romorantin is the closest such office to Saint-Aignan — and had our telephone contract modified so that Walt's name will appear on the bill and his name will now appear in the phone book. That was easy.

And then we drove out to the north side of Romo to the big Centre Leclerc "hypermarket" and I found the vacuum cleaner bags I needed. They were cheaper by far than the ones I had been buying at the SuperU in Contres for a past couple of years. So it turned out to be a very productive day, despite the panne informatique at the sous-préfecture.
Posted by Ken Broadhurst at 08:30