I'm not sure what else I have to say about cabbage rolls, but I have pictures. Here's a link to the earlier post about making them.

In fact, there's always something else to say: you can produce a vegetarian version by making a stuffing of rice, onions, carrots, celery, and mushrooms, for example. And you can cook them in a steamer rather than in tomato sauce or broth. 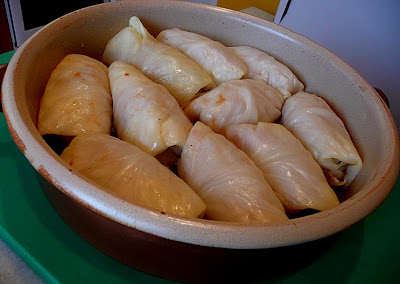 The cabbage rolls crowded into a baking dish
with tomato sauce in the bottom
One of my first memories of cabbage rolls dates back to the mid-1970s in Paris. I was a student at the Sorbonne that year, studying applied linguistics. The other people in my classes there, like me, had started teaching French as a foreign language in their home countries and were in Paris to improve both language and teaching skills. 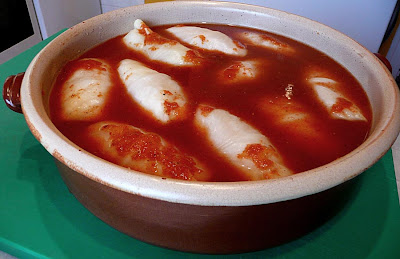 The cabbage rolls are so white that they look like
dumplings floating in the tomato sauce.
One student was a Greek woman from Salonica (a.k.a Thessaloniki). At Christmastime, she went home to Greece to be with her family. When she came back in January, she brought with her a big Tupperware-type container packed full of cabbage rolls that her mother had made. She invited a few of us to come share them with her one evening at dinner. 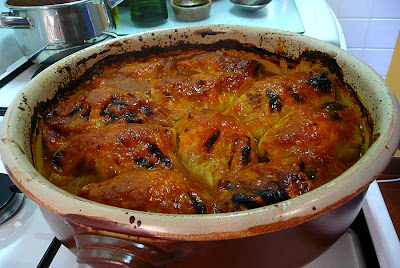 The cabbage rolls after 75 or 90 minutes in the oven —
cover and cook them at medium heat for the first hour.
Then turn up the heat and uncover the dish to brown them.
I thought they were amazing, but I couldn't tell you now exactly what they were stuffed with or what kind of sauce they were cooked in. Memory is a funny thing. It's wasn't a tomato sauce, I believe. What really remains with me is how good they were, and that they were cooked by a woman in a city in Greece that I had just barely heard of before that year. 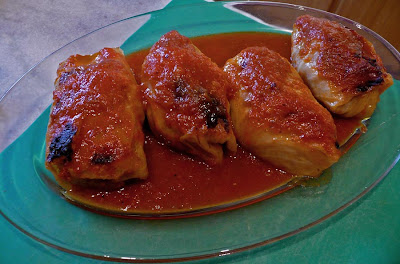 Cabbage rolls on the serving platter
Later in Paris, I don't remember ever making cabbage rolls, but I do remember cooking cabbage during the winter in the form of what is called a potée in French. It's a sort of boiled dinner with sausages, smoked or salt pork, carrots, onions, leeks, potatoes, and of course cabbage. There are as many recipes for potée as their are regions in France. It's wintertime food. 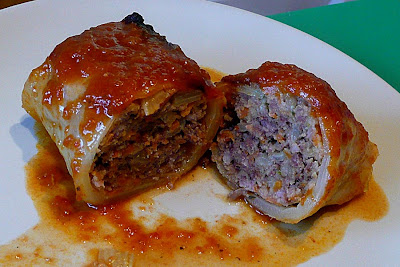 You can see how well the stuffed leaves hold together
after they're cooked.
Anyway, there it is. Making cabbage rolls and then that terrine de chou farci has kept me occupied, and fed, for several days now. Some of the rolls are in the freezer for future meals. The terrine will be today's lunch — served hot this time.

We had the terrine cold, cut into thick slices, with a good French-style pommes de terre à l'huile salad on Monday — that's boiled or steamed potatoes in vinaigrette. You mix the cooked potatoes, cut into slices or chunks, with the vinaigrette while they are still warm. That way they absorb the flavor of the dressing and are especially good.

Tomorrow: poached chicken with turnips, rutabegas, cabbage, onions, potatoes, and... leftover cabbage. I think I mentioned that the head of cabbage that I bought was enormous.
Posted by Ken Broadhurst at 07:17