The Saint-Aignan SuperU has pork shoulder roasts on sale at 2.80 € per kilogram, or about $1.75/lb. this week. Pork shoulder, also known as Boston butt, is what we use in eastern North Carolina to make pulled pork barbecue. It's flavored with a spicy vinegar sauce.

You can easily make your own sauce, and I do, but this time I mostly used sauce I bought at a restaurant called Wilber's in Goldsboro, N.C. and brought to France. The ingredients are: vinegar, water, black pepper, red peppers, salt, and spices. Note: no ketchup or tomato of any kind, and no sugar. Here's a recipe based on some that I saw on the Internet and my own preferences:

Combine all ingredients at least three hours before you plan to use the sauce, to let all the flavors blend. 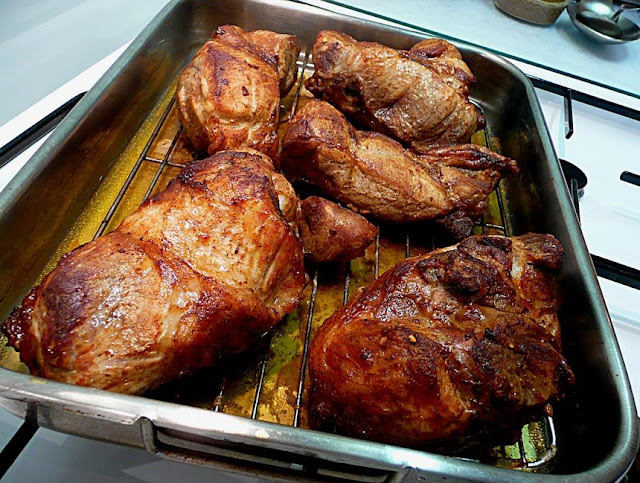 Cut the pork shoulder into big chunks, marinate them in the
sauce, and cook them in a hot oven until golden brown.

Because it's wintertime and rainy, I can't really cook the meat on a grill to give it the smoky flavor it needs. So I spray it with a product called "liquid hickory smoke." It's just smoke-flavored water, with nothing else in it. A good quantity of smoked paprika might do the job just as well. Let the chunks of pork marinate in that and a good quantity of the vinegar sauce. 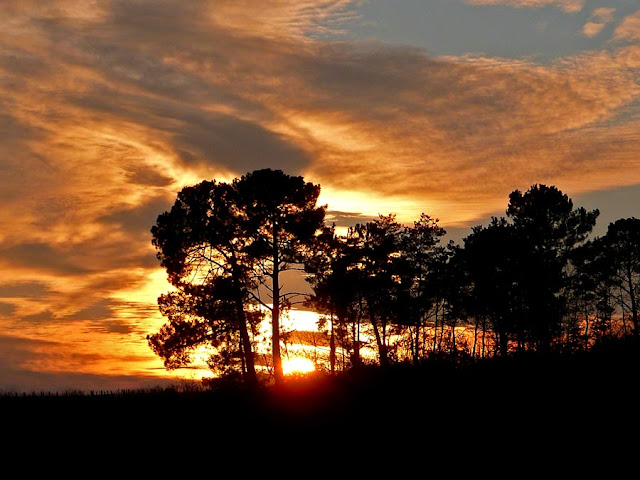 A gratuitous sunset photo I took day before yesterday...

Put the pork on a rack in a baking pan and pour some water in the bottom of the pan to keep the juices and marinade from burning. Cook it in a hot oven (225ºC/440ºF) for 30 minutes or more, turning the pork at least once to make sure all the pieces are golden brown. Baste it with the marinade and then, when the marinade runs out, the pan drippings. 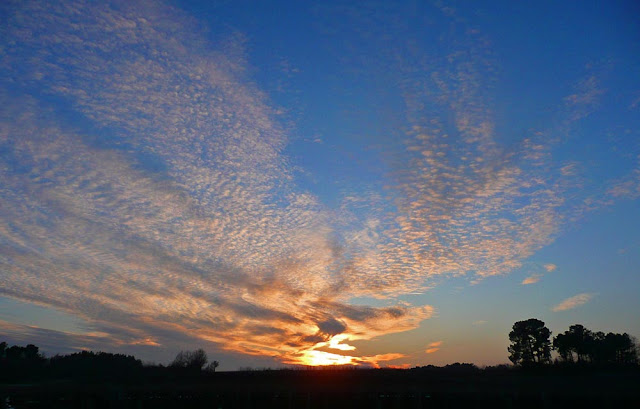 When the meat is golden brown, cover the pan with a lid or foil and turn the oven down to low (150ºC/300ºF) and let the pork cook for two or even three hours, until it starts to fall apart. Take the pork out of the pan and pull it into shreds with two forks or a pair of tongs, seasoning it with the pan drippings and more vinegar sauce, to taste. 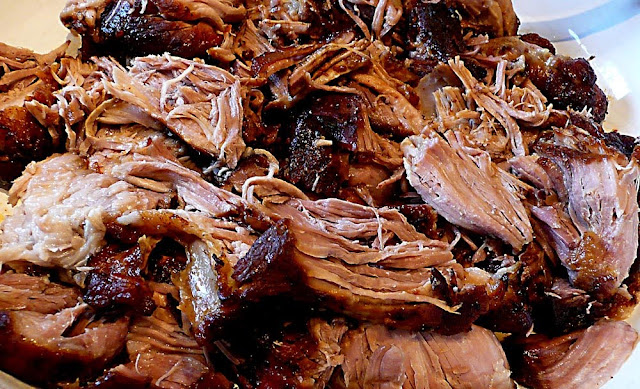 Pull the pork into shreds for serving

Eastern N.C. barbecue does not taste especially vinegary. It's not sour. The vinegar helps tenderize and break down the meat fibers, I think. The flavor is a combination of the peppers, garlic, and good slow-roasted pork. This barbecued pork freezes well, so you can make a lot of it.

It's good with coleslaw and French-fried or sauteed potatoes. Or with collards or other green vegetables. It's also good, warm, in a sandwich.
Posted by Ken Broadhurst at 09:09