Recently when I was looking around at recipes for stuffed cabbage, I turned to Jacques Pépin and Julia Child. I remembered that they included such a recipe in their late 1990s TV series Cooking at Home. We have those shows on DVD as well as the accompanying book. 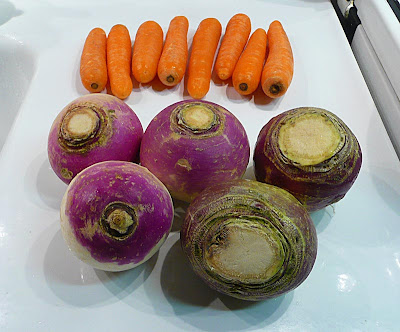 Carrots, turnips, and rutabagas
We ended up not really following their method for stuffing a cabbage, which involved removing the big outer leaves after freezing the cabbage head, and then reconstructing a cabbage-shaped loaf with a meat and vegetable stuffing between the leaves. We just made stuffed leaves as cabbage rolls. 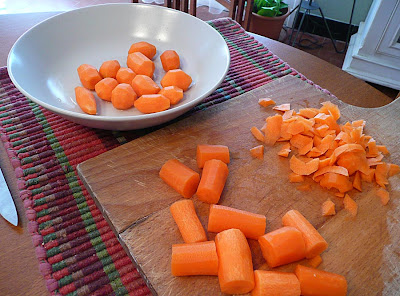 Turning the carrots, using a paring knife
But on the same show, Jacques Pépin made a pan of "turned" glazed winter vegetables that looked really good to me. We were planning to cook that Label Rouge poulet fermier blanc that week, and I thought the vegetables — carrots and turnips — would be really good with it. 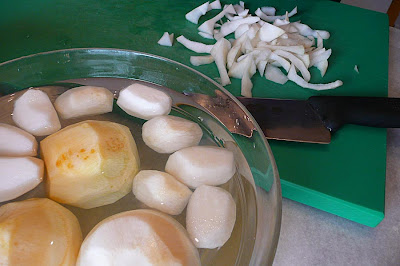 And turning the turnips and rutabagas the same way
Glazed carrots are something we do fairly often — we eat a lot of carrots. They are cheap, attractive, and appetizing, and everybody knows they are good for your health. I've mentioned in earlier posts that we had a friend, sadly passed on now, who, when he came to France, said one thing he noticed was that French people put carrots in nearly everything they cooked. I don't think he liked them much. We do, and we use them liberally. 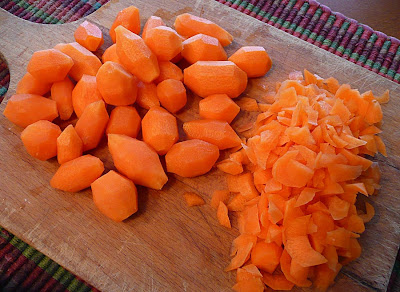 Des carottes tournées. Don't throw away the scraps. They can
go into a soup or puree. Blanch and freeze them for later use.
Turnips are a controversial vegetable. Walt and I both like them, but a lot of people find them bitter to the point of being inedible. It's true that bigger and older turnips do have a certain amount of bitterness. Small, younger ones are sweeter, and less fibrous. The important thing about turnips is not to cook them too long, because they can develop a harsh flavor if you do.

When I went to the supermarket to buy the vegetables, I noticed a big crate of rutabagas right next to the turnips. Rutabagas are another controversial vegetable. A lot of older French people won't touch them because they say that's about the only vegetable they had to eat during the German occupation of the 1940s. Some say that the only value of rutabagas is as livestock fodder. 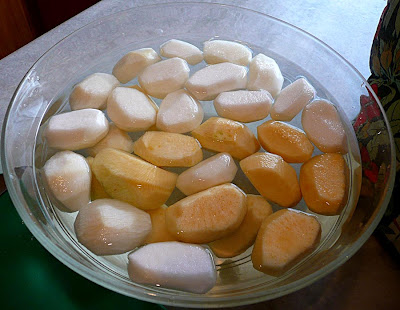 Turned turnips and rutabagas. The rutabagas are pale yellow.
I obviously don't agree with that. So I bought a couple of small rutabagas to go with the carrots and turnips. Rutabagas are a turnip hybrid and are usually yellow, not white. Both turnips and rutabagas are plants of the cabbage family. They're called "swede" in British English. My family ate them when I was growing up in North Carolina, but not often. I don't remember eating turnips, but we certainly ate turnip greens.

So what does "turning" vegetables mean? It means cutting them up and then carving the pieces into little round or oval shapes, like little footballs. In English, we more often use "turn" to describe giving a rounded shape to wood or clay in cabinet-making or pottery. We also say "to turn a phrase," meaning to give it an elegant or graceful form. French uses the verb tourner in the same ways. 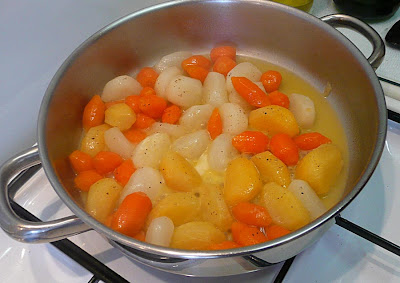 Cooking the vegetables in water, salt, butter, and sugar
The vegetables are attractive cut when they are "turned" and, more importantly, if you are going to cook them in butter and sugar to glaze them, they will roll around in the pan when you shake it during the cooking and get done and browned on all sides, evenly.

I don't think I had ever turned vegetables before. Now I have. I turned the carrots, and Walt turned the turnips and rutabagas. I put the carrots in the pan first, with some water and salt, and let them cook for four or five minutes. Carrots need longer cooking. Then I added the turnips and rutabagas to the pan, tossed them around with the carrots. I put in a tablspoon or more of butter, and a couple of teaspoons of sugar, and then overed the pan for a few minutes, on medium heat. 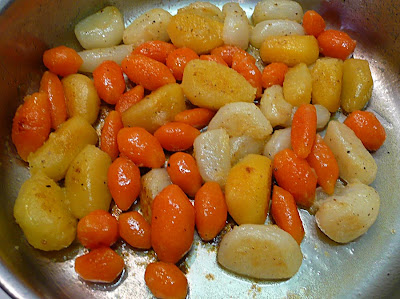 I didn't let these brown too much. They were
really good with the broiled chicken.
When the water has pretty much evaporated, take off the lid and let the vegetables cook and caramelize in the butter and sugar. Toss them around, but carefully by shaking the pan. You don't want to mash them. Let them go as golden brown as you want, without burning them.
Posted by Ken Broadhurst at 09:07